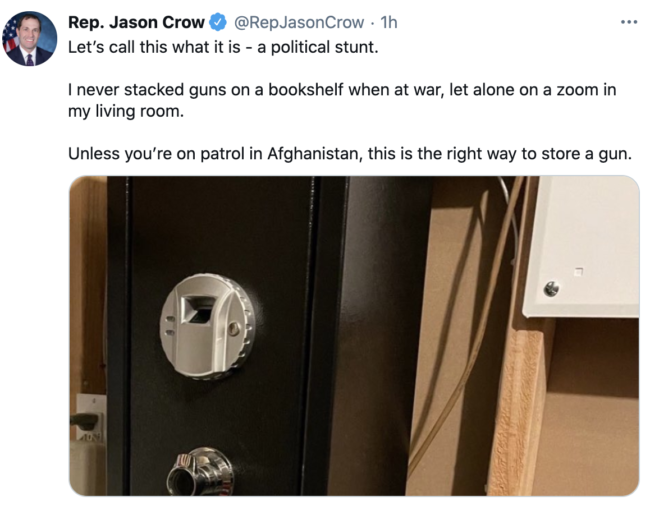 The House Resources Committee of the U.S. House of Representatives met today for its first “organizing meeting” of the 117th Congress. Little in the way of Natural Resources business was discussed during the video conference, however, because Rep. Lauren “Q*Bert” Boebert (R-ifle) initiated a stunt about allowing guns in the committee hearing room that ended up dominating much of the conversation. 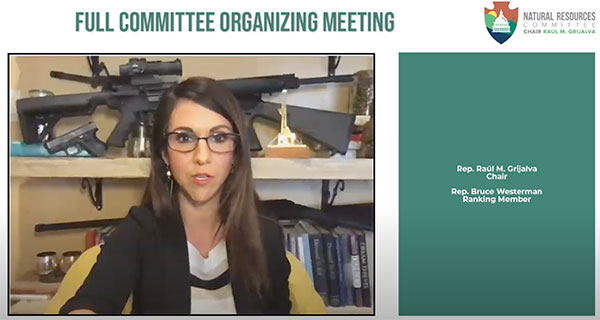 Boebert used her full speaking time during the meeting to display her comical home office background as part of a long tirade in opposition to a proposed organizing rule that would prohibit the carrying of firearms in the committee room. Boebert’s rant was an obvious publicity stunt; she was clearly reading her words from a screen and a clip of her rambling speech was quickly posted online.

Republicans are trying to dismantle committee rules to prohibit firearms and dangerous weapons in the hearing room. The fact that we have a member of the committee fetishizing weapons with her zoom background makes a clear case for why these rules are necessary. @NRDems pic.twitter.com/cWn26AFpSo

If somebody wants to have a shrine to their gun fetish as a Zoom backdrop in their private life, they can do that. But this is our hearing room. And at some point, we will get past the COVID epidemic and we’ll all start showing up in person, and our safety, and our ability to conduct business civilly, without feeling threatened, is a relevant consideration, unfortunately. So, I think it’s necessary — not only appropriate, but necessary — that we lay down these ground rules that whatever your fetishes or feelings are about guns, you’re not going to bring them into our committee room. You don’t need them there for your own safety. Many of us feel like it threatens our safety. And that’s just not going to be allowed, and that’s entirely appropriate, and unfortunately, necessary, Mr. Chairman.

You can watch the full committee hearing on YouTube. We also transcribed Boebert’s rant, which you can read after the jump below, in which she asks if women will still be allowed to vote in the committee and requests a personal security detail to be personally funded by Committee Chairman Raúl Grijalva.

BOEBERT: Thank you, Mr. Chairman. An in-person committee meeting would solve a lot of the problems that we’re seeing today. Mr. Chairman, we all took an oath to uphold and secure the Constitution — every single one of us. Our first act as Members of Congress was to take our oath of office. Please allow me to remind you of a portion of that oath, uh, the Chair and every other Member here solemnly swore that we would defend the Constitution of the United States against all enemies, foreign and domestic. Uh, the Second Amendment is very much a part of the Constitution of the United States, so it doesn’t matter how you feel, how you classify it — this is an enumerated right that American citizens have to, uh, to keep and bear arms.

As you’ve heard other committees are not taking up similar rules. I also sit on the Budget Committee, and there’s not a rule banning firearms from the hearing or conference rooms. How do you plan to enforce this, Mr. Chair? If there is no enforcement measures here, why have the rule? Will there be metal detectors installed outside the committee hearing doors? What is the procedure for delaying a vote as Members get screened? Who is going to pay for these new metal detectors and increased security? Mr. Chairman, will YOU pay for this, or will the taxpayers cover these expenses?

On January 6, none of us were looking to our neighbors saying, ‘Gosh, I hope there are enough metal detectors outside.’ No. The Speaker of the House was whisked away to safely [sic] while we were all left vulnerable and defenseless. With that, I would like to ask, will there be places to store firearms? I’m allowed to carry my firearm in the Capitol Complex. So will there be a safe storage area for me to lock up my firearm once I am disarmed by these Chairmen?

I believe that this is just messaging on the part of the Democrats. It is unconstitutional for Members of Congress to be detained on their way to vote. With that, I would like to say, are there any other enumerated rights that will be nullified in this committee? Do we have the right to free speech here? The First Amendment secures our right of religious freedom. Are Bibles forbidden in this committee? Are hajibs? Are crosses prohibited in this committee? Do we have the 14th Amendment? Are we not all equal under the law here in the Natural Resources Committee? How about the 19th Amendment? Can women vote in this committee? As a woman, I need to be certain that this committee has no intention to take away my right to vote. Why do you think you can cherry pick…why does anyone think that they can cherry pick the Second Amendment and say that this is the one enumerated right that we can take away from people? [Pols emphasis]

Why stop with the Second Amendment? Let’s go ahead and quarter soldiers in this committee room? There’s plenty of soldiers in the parking garage at ‘Fort Pelosi’ in Washington D.C. Let’s go ahead and forget about due process while we’re at it. That way we can unreasonably seize and search Members of Congress before they enter the committee room. You know, kind of like what’s going on in the House Chambers right now.

I urge my colleagues to think about this: If we don’t protect our rights in Washington D.C., there’s little hope outside of Washington D.C. for the American people to have those rights. This rule is absurd, and it is a discriminative power grab of our constitutionally-protected right to…

GRIJALVA: The Member’s time has expired [Boebert is still chattering in the background]

BOEBERT: …this is a blatant violation of our Constitutional rights and I yield.