Democrats are done waiting in Colorado

The much-anticipated “public option” health care reform bill is finally being discussed today in the House Health and Insurance Committee after negotiations between lawmakers and the health care industry failed to create a compromise agreement. This was probably inevitable given that hospitals and health insurance companies were spending a million dollars on television ads against this proposal BEFORE IT WAS EVEN WRITTEN.

For years, the private health care industry has been wagging its finger at lawmakers saying that the government shouldn’t regulate their ability to make ridiculous amounts of money (Colorado hospitals are literally the most profitable in the nation) and that they can cut costs by themselves. This bill responds to those arguments by saying, “Okay, show us.”

The goal of HB21-1232 is to reduce health care costs for Coloradans and small businesses by requiring the health care industry to make plans available in each county — by 2024 — that would reduce the cost of health care premiums by 20%. If the industry can’t meet this goal, then the state will move forward with creating its own “public option” plan for Colorado consumers by 2025.

Republicans are carrying water for the health care industry by making the absurd argument that this attempt to lower costs for Coloradans is only going to make things worse. Of course, Republicans don’t actually have any ideas of their own for what we could do instead. They just don’t want to do this.

Much like Congressional Republicans who universally opposed a COVID-19 stimulus package that was the most popular piece of legislation in modern American history, Colorado Republicans appear committed to the same sort of political seppuku on the public option. House Minority Leader Hugh McKean said on KHOW radio this week that “this…as I’ve told my Republican colleagues in the House, is the hill we die on.”

Uh, okay. As a December poll from Healthier Colorado found:

A two-thirds majority, (66%), of voters support this healthcare cost reduction initiative, while only 26% oppose it, and 8% of voters are undecided.

In that same poll, 1-in-5 Coloradans said that the current cost of healthcare is “very unaffordable for them and their family.” Nobody could argue with a straight face that the cost of health care is not a problem; every year prices go up and benefits go down for Coloradans. Health care costs have been outpacing wage growth for years. 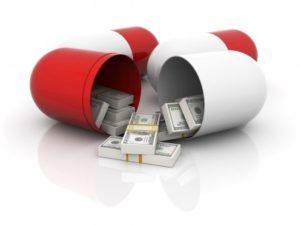 Unless you have access to giant pills full of cash, you are probably not happy with the cost of health care in Colorado.

In recognition of the fact that opposing this bill is not politically wise, Republicans and the health care industry continue to trot out bogus scare tactics that have consistently been proven wrong. For example, one of their favorite arguments is that the public option bill would shift costs onto other markets, thus raising health care costs in a different manner. But this practice is explicitly prohibited in the language of the bill. Opponents also argue that passage will make it harder for minorities and low income Coloradans to afford health insurance; again, this is directly addressed (and prohibited) in the language of the bill.

Opponents say the public option bill will give “politicians” control over your health care. It will not.

Opponents say passage would force rural hospitals to close for some nebulous reason. But if more rural Coloradans have access to health insurance, then rural hospitals will be compensated for care more regularly, which gives them…MORE money, not less. Obamacare proved this argument false; any reduction in prices is more than offset by the sheer number of new customers who can suddenly afford health care.

As opponents run out of viable talking points, you’ll hear them shift toward a message that Democrats are attacking the health care industry and its workers at a time when it is most vulnerable (because of the COVID-19 pandemic). This is gross, and it’s also dumb. Global pandemics are a pretty good example of how important it is for more people to have access to health care.

Coloradans of all stripes want this bill to become law, while the health care industry and Colorado hospitals do not. In the end, this might be the simplest argument of them all.