Get More Smarter on Friday (March 5) 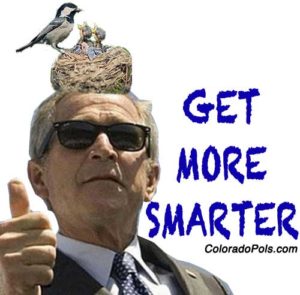 One year ago today, Colorado announced its first case of COVID-19. Let’s Get More Smarter; if you think we missed something important, please include the link in the comments below (here’s a good example). If you are more of an audio learner, check out The Get More Smarter Podcast. And don’t forget to find us on Facebook and Twitter.

► The U.S. Senate is slogging through a vote-a-rama on a $1.9 trillion stimulus bill as Republicans pursue every possible angle to make the process of relief for American families take longer. This “Performative Obstruction” started on Thursday with a demand by Wisconsin Republican Sen. Ron Johnson that the entire 628-page bill be read aloud (which took Senate clerks 10 hours and 43 minutes to complete).

As part of today’s vote-a-rama, both Colorado Senators Michael Bennet and John Hickenlooper voted yes on a $15 minimum wage. The New York Times has more on today’s action on the Senate floor:

The Senate is set to debate President Biden’s nearly $2 trillion stimulus plan on Friday as Democrats prepare to barrel past widespread opposition from Republican lawmakers and approve billions of dollars in funding for unemployed Americans, vaccine distribution, small businesses, schools and hospitals.

Senators will reconvene with three hours of debate before engaging in a rapid-fire series of votes on proposed amendments. Some are likely to force lawmakers into casting politically tough votes, while others could draw enough support to further tweak the legislation. The vote-a-rama, as it is known, could stretch long past midnight as Republicans battle against a bill whose crafting they were cut out of…

…But the efforts to slow action on the Senate floor to a crawl are expected to have little effect on the final legislation. Each party holds 50 seats in the chamber, giving Democrats a one-vote margin of control thanks to Vice President Kamala Harris’s power to break ties.

Back in Colorado, struggling residents of CO-03 are upset that Rep. Lauren “Q*Bert” Boebert (R-ifle) is making no effort to provide assistance. Boebert’s sole purpose in Congress seems to be seeking out different ways to offend people.

► As The Washington Post reports, pressure is growing on Senate Democrats to get rid of the filibuster:

…as Biden faces a critical stretch of his presidency, even moderate Democrats are urging more immediate changes — particularly rewriting the filibuster, so that at the very least fewer bills need 60 votes to pass the Senate.

Democrats increasingly worry that popular pieces of Biden’s agenda will hit a wall in the Senate, including his plans for climate change, immigration, gun control, voting rights and LGBT protections. Failing to enact them, they fear, could be a political disaster for Democrats as well as a substantive one.

Elsewhere, the AFL-CIO is considering joining the battle to end the filibuster.

► To the Colorado legislature we go…

Lawmakers are considering a criminal justice reform bill intended to help reduce overcrowded jails, as well as a measure that would require discharged prisoners to leave jail with some form of photo identification.

The Denver Post updates efforts to skip standardized testing this year because of coronavirus-related concerns.

Legislation to extend “to-go alcohol” from local restaurants is moving forward, as is a bill seeking to tweak a new marijuana delivery program.

► As The Associated Press reports, opposition to President Biden’s handling of the coronavirus pandemic is coming from only one specific slice of the population:

Biden is enjoying an early presidential honeymoon, with 60% of Americans approving of his job performance thus far and even more backing his handling of the coronavirus pandemic, according to a new poll from The Associated Press-NORC Center for Public Affairs Research.

At a moment of deep political polarization in America, support for Biden’s pandemic response extends across party lines. Overall, 70% of Americans back the Democratic president’s handling of the virus response, including 44% of Republicans.

“During the past year, we have tragically lost nearly 6,000 Coloradans to this deadly virus,” Gov. Jared Polis said in a news release.

Polis invites all Coloradans to participate Friday in a “virtual statewide Evening of Remembrance,” to honor pandemic victims who lost their lives.

A “virtual remembrance ceremony” is scheduled for 6:30 pm today.

► Alaska Republican Sen. Lisa Murkowski joined with Democrats in advancing the nomination for Deb Haaland to head the Department of Interior. If confirmed, Haaland would be the first Native American to hold a cabinet-level position in U.S. history. As The Washington Post reports, Murkowski chose to side with history rather than the oil and gas industry.

► CBS4 Denver reads a couple of Tweets about a police reform bill in Congress. The complete lack of substance or effort here is embarrassing.

A “furious” state Sen. Julie Gonzales calls out GOP CO lawmakers for still being maskless: “With the clearest of opportunities to come together and do right, we have colleagues … who have chosen to prop up conspiracy theories and cast doubt on life-saving recommendations.”

► A former State Department staffer in the Trump administration has been charged with taking part in the January 6 attack on the U.S. Capitol.

Hiring picked up last month as states lifted restrictions and stepped up vaccination efforts, with the government reporting on Friday that the American economy added 379,000 jobs last month.

The pace of hiring in February was an unexpectedly large improvement over the gains made in January. It was also the strongest showing since October.

► As The Colorado Sun reports, the smallest of Colorado’s small businesses are now eligible for larger federal coronavirus relief loans.

► As The Pueblo Chieftain reports, another District Court judgeship is opening up.

► The Catholic Church is opposing legislation that would end the statute of limitations on civil lawsuits regarding accusations of sexual abuse. From The Denver Post:

For decades, survivors of childhood sexual abuse and their advocates have urged states to let them hold abusers accountable in civil court, no matter how long it’s been since the abuse. A bipartisan bill in the Colorado Legislature to do just that so far appears to have widespread approval, but it’s not without opposition from the Colorado Catholic Conference — a church embroiled in a sex abuse scandal in Colorado, the U.S. and around the world.

There is no expiration date in Colorado to bring criminal charges against a person accused of child sex abuse, but the statute of limitations to sue an individual is only six years after a victim turns 18. Last year’s effort to change the latter failed.

The renewed push to eliminate the statute of limitations for lawsuits against alleged child sex abusers saw an unanimous Senate vote this week — a vote Wheat Ridge Democratic Sen. Jessie Danielson called “historic.” But the bipartisan bill, which now heads to a House committee, doesn’t apply to civil claims that will have already expired by the time it takes effect, which was a sticking point over constitutionality concerns last year.

In a separate story, Catholic Bishops are urging adherents to avoid the new Johnson & Johnson COVID-19 vaccine because it was at least partially derived from stem cells.

► Denver Public Schools plans to bring most students back for full in-person learning around April 5. Denver schools are also considering a later start to the 2021-22 school year in August.

► The Tri-County Health Department is setting up vaccination clinics for Aurora court workers.

► As The Washington Post reports, there is no bottom when considering how far drug manufacturers might sink:

Congress is questioning four large drug companies about their plans to deduct some of the costs of a landmark opioid settlement from their taxes, disclosures first revealed in an analysis last month by The Washington Post.

On Thursday, the House Committee on Oversight and Reform sent letters asking Johnson & Johnson, McKesson, AmerisourceBergen and Cardinal Health to provide details about the tax deductions, which would lower the cost of a legal settlement in which they have proposed to pay a combined $26 billion to compensate communities impacted by the opioid crisis.

In particular, the House members expressed concern about the companies potentially misusing a tax provision Congress included in last year’s Cares Act bailout package to help companies struggling during the pandemic. Cardinal Health, which agreed to pay $6.6 billion in the settlement, said last month it plans to use the Cares Act tax provision to collect a $974 million cash refund on the losses it incurs in the legal settlement.

Members of the House committee led by Chairwoman Carolyn B. Maloney (D-N.Y.) said in a letter to Cardinal Health that its plan to put taxpayers on the hook for its settlement was “reprehensible” and said the action suggests the company has no remorse for its role in the opioid crisis.

► The Jefferson County Elections Division was recognized with a national award for its use of a new online chat system to answer voting questions.

Where did the flu go? https://t.co/Uzjjg3uQHE

The statement read like a series of Trumpian tweets strung together — untruths, exaggerations, bullying, preening etc. (Trump was banned from Twitter shortly after the January 6 riot at the US Capitol.) I went through it line by line. The, er, best(?) are below.

1. “Karl Rove has been losing for years, except for himself.”

Here’s some more background from Reuters if you’re interested.

► Someone please explain to us: Why is this a story? CBS4 Denver “political reporter” Shaun Boyd produces an entire piece on the oil and gas industry ribbing North Face, because…um…¯\_(ツ)_/¯

► A former professional wrestler from Las Vegas is trying to win a special election for a vacant congressional seat in Texas.

► The “war on rural Colorado” has always been a stupid narrative promoted by some Republicans. It’s still being thrown around, and it’s still dumb.

► Donald Trump was not inaugurated as President on Thursday. Sorry, QAnon conspiracists.