Get More Smarter on Friday (February 26)

Friendly reminder: 2021 is NOT a leap year. If you think we missed something important, please include the link in the comments below (here’s a good example). If you are more of an audio learner, check out The Get More Smarter Podcast. And don’t forget to find us on Facebook and Twitter.

► As The Denver Post reports, a loosening of pandemic-related restrictions is just around the corner:

Jefferson County will loosen its COVID-19 restrictions — allowing restaurants and event spaces to increase their capacities — starting Friday morning, but Denver will have to wait after new coronavirus cases ticked up in the city again this week.

Denver is currently at Level Yellow, the third stage on the state’s dial framework of public health restrictions. To move down to Level Blue under the relaxed standards announced in late January, the city would have to average fewer than 100 new COVID-19 cases for every 100,000 people, per day, for a week.

The city flirted with that line in the days following Valentine’s Day, but cases rebounded slightly in recent days, according to data from the Denver Department of Public Health and Environment. As of Wednesday, Denver’s average was 104.5 cases per 100,000 people.

Denver Mayor Michael Hancock said the city is “very close” to moving into Level Blue, which he described as a step toward revitalizing its arts and sports scenes. He urged residents to continue wearing masks and avoiding large gatherings, to help keep new cases down.

► Let’s catch up on news from the state legislature!

Colorado lawmakers are taking a proactive approach in trying to prevent major power outages like those seen in Texas earlier this month.

Lawmakers are considering a bill to prevent pet stores from selling puppies and kittens.

Sides are already gearing up for a bill to limit the THC potency in marijuana sold in Colorado…even though the bill hasn’t yet been introduced formally.

► CNN reports on what looks to be a huge moment for Democrats and President Biden:

(The $1.9 trillion COVID relief) bill, which the House of Representatives is expected to pass Friday with Democratic votes, has the symbolic weight and financial power to define what Biden hopes will be the post-pandemic period as it aims to quell the virus and trigger a rebound from the economic ruin in its wake. That remains true despite the Senate parliamentarian ruling Thursday that a provision raising the federal minimum wage to $15 an hour infringes the budgetary process known as reconciliation that Democrats plan to use to pass the package with a simple majority. The decision was a blow to progressives but could ease Democratic divisions over the package and make it easier to pass…

…The plan’s mammoth size — more than twice as big as the Great Recession stimulus plan that Biden managed in the Obama presidency and nearly half the cost of the annual federal budget — hints at the enduring political shadow it will cast.

The measure is intended to significantly beef up the vaccine drive that will hopefully end the pandemic and to provide funds for remodeling schools to improve ventilation and social distancing to get millions of kids back into class. It would also use the power of government to alleviate short-term economic pain — for instance by granting $19 billion to state and local governments to cover back rent and utility payments — and on a more permanent basis, to share the benefits of the US economy more equally.

Republicans can (and will) complain about the relief bill, but they do so at their own peril: Americans view the bill as one of the most popular pieces of legislation in recent history.

► Here’s a headline from POLITICO that would have been accurate at any point during the last 3-4 years:

► Congresswoman Lauren “Q*Bert” Boebert (R-ifle) is in Washington D.C. for one reason…and that reason has nothing to do with being a lawmaker.

Boebert and fellow Qaucus member Rep. Marjorie Taylor Greene (R-GA) are like empty calories; their rhetoric might fill you up for 15 minutes, but ultimately it accomplishes nothing for you or anyone else.

► Colorado Republicans appear hell-bent on keeping up with their brethren around the country when it comes to their commitment to crazy pants conspiracy theories.

► According to new poll results from Colorado-based Republican pollster Magellan Strategies, only 29% of Colorado Republicans say they plan to get the COVID-19 vaccination when it is available: 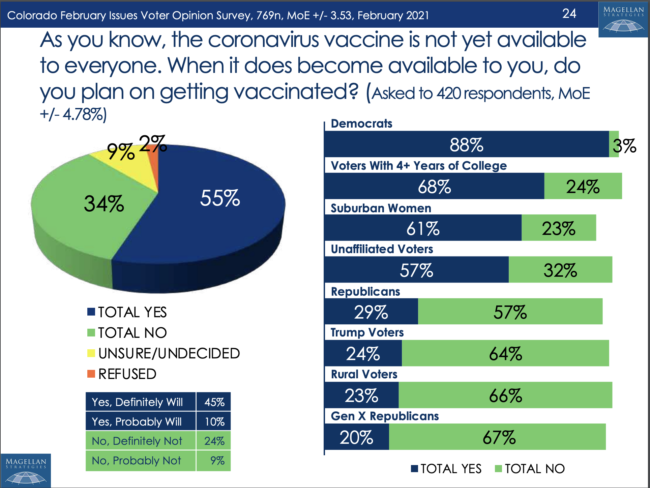 Click here to read the survey “verbatims” in which respondents explain WHY they plan on avoiding a COVID-19 vaccination. For example:

“I got a reliable immune system and a loving God.” Okie-dokie! Let’s make sure nobody tells any of these people about the brain-control microchips in the vaccine.

► Ohio is the first state to legally challenge the federal government over Census delays. From The Associated Press:

The lawsuit filed by Ohio asks a federal judge in Dayton to restore a March 31 deadline for the Census Bureau to turn over 2020 census figures used for redrawing congressional and legislative districts, instead of a Sept. 30 deadline announced by the statistical agency earlier this month. The lawsuit claims the delay will undermine Ohio’s process of redrawing districts.

► Colorado Newsline checks in on the public lands debate in Congress.

Congresswoman Lauren Boebert, proudly representing Colorado’s 3rd Congressional District, is scheduled to speak at CPAC — the Conservative Political Action Congress — on February 27, sandwiched between Donald Trump Jr. today and twice-impeached former president Donald Trump on Sunday. The event also includes such intellectual luminaries as talking haircut/Florida congressman Matt Gaetz, and Kevin Sorbo, an actor who played Hercules on the eponymous TV show 25 years ago, who’s going to share his deep understanding of the climate crisis. (We wish that was a joke.) Boebert will be part of what’s sure to be a well-reasoned and not at all slavish appeal to the gun lobby and that cold-dead-hands section of the American public that’s so afraid of anyone who’s not just like them that they need to pack heat to eat flapjacks.

► As The Grand Junction Daily Sentinel reports, not everyone is a fan of keeping the Bureau of Land Management headquarters in Colorado:

A former Bureau of Land Management state director for Wyoming on Thursday called on the Biden administration to “restore a better national (BLM) office to the Washington, D.C., area” following the move of the agency’s headquarters to Grand Junction last year.

“The move of the BLM national office to Grand Junction was a thinly veiled effort to gut the organization,” Mary Jo Rugwell said during a webinar titled “A New Era for the Bureau of Land Management” that was hosted in part by Public Employees for Environmental Responsibility.

“With no national leadership inside the beltway, the Bureau of Land Management will never be able to compete with and coordinate well with other organizations,” said Rugwell.

Rachel Levine, the physician nominated to become the Biden administration’s assistant secretary of health, came to her confirmation hearing prepared to politely discuss matters such as the covid pandemic, the opioid epidemic, behavioral health and racial disparities in medical treatment.

“Dr. Levine, you have supported [minors] being given hormone blockers, and surgical reconstruction of a child’s genitalia,” Paul said, in a tirade in which he also conflated genital mutilation (a horrifying practice that public health experts view as a human rights violation) with the transition-related surgeries chosen by some transgender individuals to help their bodies conform with their gender identity.“

You give a woman testosterone enough that she grows a beard. Do you think she’s going to go back looking like a woman when you stop the testosterone?” Paul demanded.

Had the hearing gone on for much longer, Paul might have accused Levine of having “cooties.”

► A Denver police sergeant is under scrutiny for writing a letter of support on behalf of a Colorado man charged with attacking a police officer during the Jan. 6 terrorist attack on the U.S. Capitol.

► COVID-19 health precautions have seemingly crippled the flu this season.

► As Colorado Public Radio reports, some Colorado oil and gas workers aren’t pretending that the future of their industry isn’t grim.

► A current Colorado Springs City Council member may or may not have endorsed another candidate for a city council seat, or something.

► Twitter may have doomed the nomination of Neera Tanden as President Biden’s pick to run the Office of Management and Budget.

We should not take a chainsaw to the whole economy, but rather we should implement a scalpel-like approach for Big Tech. pic.twitter.com/5CajGzPZ57

► Congresswoman Lauren “Q*Bert” Boebert (R-ifle) insists that she does not have relationships with white supremacists and militia members…she just happens to know a LOT of people who do.

If I remember my Exodus right, the Golden Calf shows up right after Young Pharoah is gone https://t.co/YVrjkuO5xp

► Arizona Republicans spell “Democracy” with different letters than the rest of us.