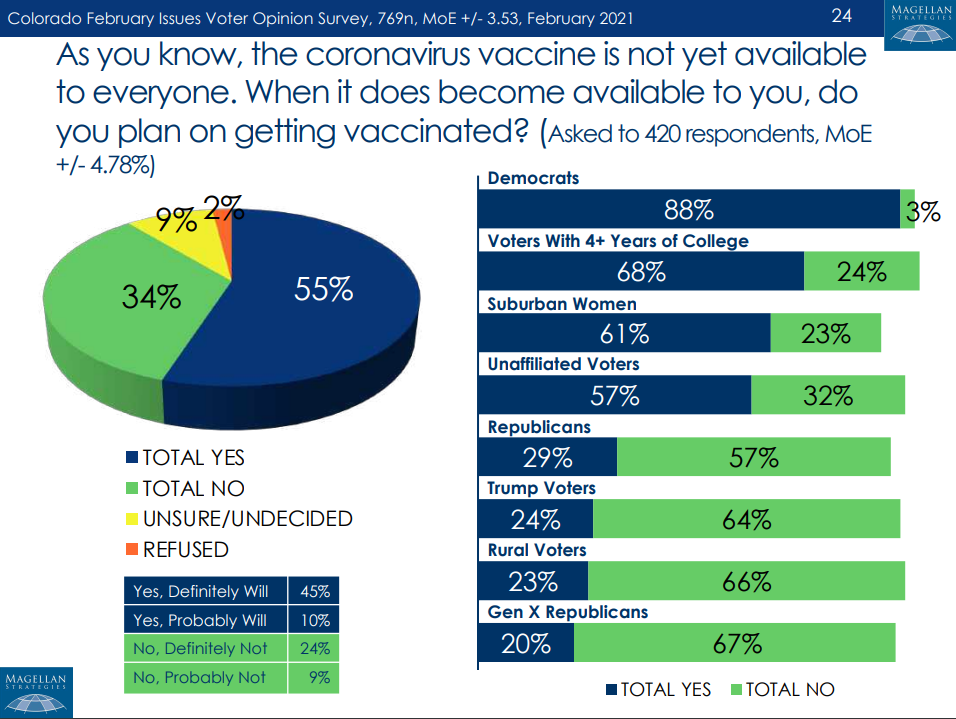 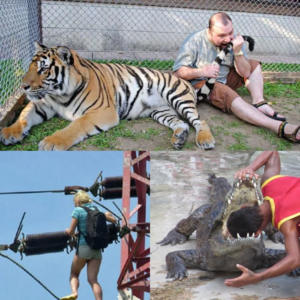 As the Colorado Sun’s Jesse Paul reports, acceptance of the COVID-19 vaccines now being administered by the thousands daily at long last in Colorado shows a stark partisan divide in a newly-completed poll–more so, to be frank, than we would have expected despite the well-earned cynical presumption many of our readers no doubt harbor:

Getting the coronavirus vaccine in Colorado may depend on a person’s political party affiliation, with a new poll showing Republican voters are far less likely to get inoculated than their Democratic and unaffiliated counterparts.

Magellan Strategies found that only 55% of registered voters in Colorado who haven’t been inoculated yet want to receive a vaccine when it becomes available to them. The share rises to 89% among Democrats and 57% among unaffiliated voters.

Only 29% of Republicans, however, said they’d get a coronavirus vaccine, according to the poll. Meanwhile, 57% said they would not get inoculated while 12% said they were undecided.

When asked, “How concerned are you that you or someone in your family will become infected with the coronavirus?” 32% of Republicans said they were either “very” or “somewhat” concerned, compared to 89% of Democrats. When respondents were asked whether they planned to get a COVID-19 vaccine, 29% of Republicans said yes, compared to 88% of Democrats.

Public health officials in Colorado and beyond are desperately trying to convince people that the vaccine is safe, and that broad buy-in is the only clear way out of the pandemic. Nine percent of respondents said they hadn’t yet decided whether they’re comfortable being vaccinated.

Although there’s a clear relationship between not being concerned about the pandemic to begin with and refusing the vaccine to prevent infection, it’s somewhat more difficult to understand the reluctance of Republicans to accept the COVID-19 vaccine after former President Donald Trump hyped the forthcoming vaccines relentlessly while trying to not lose the 2020 election. Is it possible that more Republicans would be lining up for their shots if Trump had kept the White House?

That’s a hell of a way to make life-and-death medical decisions, but we can’t rule it out.

Because vaccinating enough of the public to achieve herd immunity is the key to fully reopening the economy, it’s a maddening reality the same people who immeasurably worsened the pandemic over the last year by downplaying its severity and defying best practices to reduce the spread, resulting in the United States having the most infection and death from COVID-19 of any nation on Earth, are now posing the biggest obstacle to putting this pandemic in the rear-view mirror for good.

We’re going to beat COVID-19. But at every step, our nation’s response to this deadly disease has been hobbled by the politically-motivated willful ignorance of one side. The net effect of this has been, ironically, to expose that side to disproportionate risk. How many Republicans died needlessly because it became an article of faith to not take COVID-19 seriously?

This is a movement truly leading its adherents over the cliff.