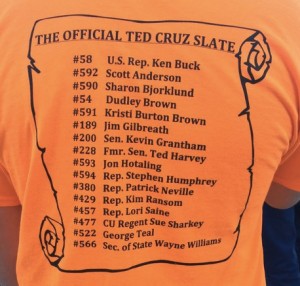 You will never see this shirt again.

AP reports on the scandal gripping the nation this morning as residents of the state of Texas grapple with another disastrous day of freezing temperatures and widespread power outages:

Texas Sen. Ted Cruz has traveled to Mexico for a family vacation as his home state struggles with a powerful winter storm that left many residents without power or safe drinking water.

The high-profile Republican lawmaker went with his family for a long-planned trip to Cancun and was expected to return immediately, according to a source with direct knowledge of the situation who spoke on the condition of anonymity to share private conversations…

The revelation opens Cruz to significant criticism in Texas and beyond as he contemplates the possibility of a second presidential run in 2024. [Pols emphasis]

HEARTBREAKING: One Texas resident had to travel over 1700 miles to find heat, water, and electricity. https://t.co/WwbVgp2BcI

Although beloved by a segment of the far right who supported Sen. Ted Cruz through his years of antics that have sometimes made him a pariah in his own party, Cruz’s presidential aspirations were effectively dashed when he failed as the last line of defense against Donald Trump’s takeover of the Republican Party in 2016 despite the defiant “Never Trump” backing of Colorado Republicans. Cruz’s transformation from Trump critic to obsequious Trump toady followed a similar arc to that of Colorado Sen. Cory Gardner–but after Cruz led the dead-ender drive to undo the results of the 2020 elections culminating in the January 6th insurrection at the U.S. Capitol, the last little shred of Cruz’s credibility outside his diehard base evaporated.

And now? Cruz is reportedly scurrying back today from Mexico, having realized too late the mistake he made leaving his constituents to freeze in the dark while he played on the beach. All things considered he might as well stay put, because it’s tough to imagine how Cruz can ever show his face in the Lone Star State again.