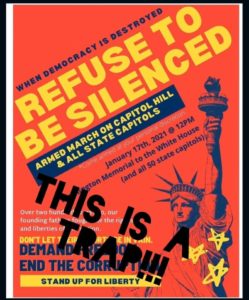 Ad for a “50 state march” yesterday denounced as “a trap” by local militia groups.

Colorado Public Radio’s Megan Verlee reports that despite what you may have been told to expect, the revolution did not begin yesterday either:

A smattering of people collected on the steps of Colorado’s Capitol on Sunday, a far cry from the massive, potentially violent protests federal and state authorities had braced for.

A woman held her position steadily before cameras, displaying a small American flag and a sign accusing Congress of negligence. Nearby, a man with a white beard poking out from his ‘Trump 2020’ mask chatted with reporters. Around them, on the yellow grass and stone pathways, clumps of bundled-up people stood around under cloudy skies, waiting to see if anything would happen.

By far the largest group on hand were members of the media, brought out by an FBI bulletin warning of potential armed protests at all 50 state capitols leading up to the presidential inauguration on Wednesday. But in Denver, nothing like that has occurred so far.

Larry Woodall, a supporter of President Donald Trump, says he was surprised by how few people showed up. “I thought there would be at least 100 people. I feel like the lone wolf,” said Woodall.

Some businesses in the area boarded up their stores to prevent damage if things were to get violent. A gate was put up around the perimeter of the Capitol building. 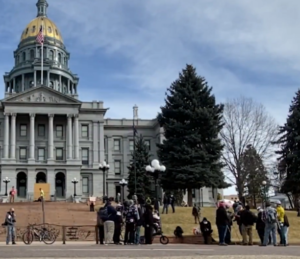 Although warnings to all 50 state capitols went out urgently in the wake of the January 6 riot at the U.S. Capitol that more violent and potentially armed protests would take place in the days before Joe Biden’s inauguration this coming Wednesday, the weekend passed without any major disturbances–and miniscule turnout to the publicly announced protest events around the country. Part of this we assume can be attributed to the high alert of local police across the nation beginning last Friday and expected to continue through Inauguration Day.

The events being planned to March on Capitols across the country are NOT being organized by Patriots. We are urging every one of our members and followers to avoid the Capitols and areas around them if at all possible. Be cautious and be aware.

Speaking to the Colorado Springs Gazette, UADF militia leader John Tiegen appeared to swear off protests ahead of Inauguration Day entirely, saving their metaphorical and literal powder for “the next administration.”

FEC United and UADF said in statement Wednesday morning that events at the U.S. Capitol were “unacceptable and should be condemned by all…”

“We cannot stoop down to the leftist’s level of chaos and anarchy,” Tiegen said in the Wednesday morning statement. “We must hold strong to our morals and stand tall to ensure we don’t lose sight of the bigger picture — which is to hold our officials accountable to their duty to the people who voted for them. UADF is an organization that stands to defend and protect what is ours in the face of concern for the action, or rather, lack of action, the next administration will take to quell violence from left-wing, militia organizations. We have to be ready to protect ourselves and our neighborhoods.”

After such dire warnings issued after the January 6th assault on the U.S. Capitol, the failure of pro-Trump protests to materialize in general across the nation this weekend is a curious anticlimax to say the least. To be sure, there is still plenty of time for something consistent with warnings of a “50 state uprising” to take place. It’s very possible that by Wednesday any false sense of security we might feel today will be a sad memory.

Or, maybe the events of January 6th forced a reckoning, if not moral then at least practical, on the far right? After a shocking success against an unexpectedly soft target that in retrospect most believe could have been prevented, every law enforcement agency in the country is on maximum alert this week. 25,000 National Guard troops in Washington D.C. and security measures that should have been in place on January 6th are now in place to prevent what happened on that day from happening again. The determination with which federal law enforcement is pursuing U.S. Capitol insurrectionists cannot help but give those who might try something like that again pause.

And after Donald Trump disowned the rioters he sent to the Capitol with orders to “fight like hell” and showered with praise initially, it’s a fair question–why would anybody risk their life and freedom for this guy again?

If there is anything we hate it’s writing a post that doesn’t age well, and we acknowledge this one may not. But if we didn’t at least consider the possibility of a less dramatic end to the most chaotic election in American history that didn’t directly result in a war (knock on wood), that too would be a disservice to our readers.

We’re steeling ourselves to be wrong, but we’ll be elated in the event we’re right.