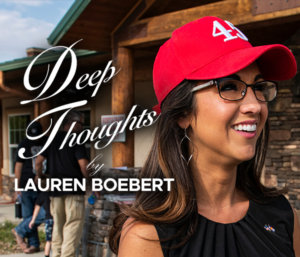 It’s time to return again to a new feature we call “ Thoughts By Lauren Boebert.”

When last we caught up with Congresswoman-elect Lauren “Q*Bert” Boebert, she was busy trying to explain the “algorithms” that done messed up the 2020 election for her man President Trump.

Today, Boebert sent out a tweet that wouldn’t even try to summarize ourselves. In fact, we managed to catch screenshots of two different versions of Boebert’s tweet. We decided to show you both versions of the tweet to underscore an important point: Boebert took the time to edit her tweet to change “Santa Clause’s” to “Santa Claus’s,” but at no point did she apparently re-think the logic of her message or her weird decision to say publicly that Santa Claus isn’t real just a few days before Christmas. 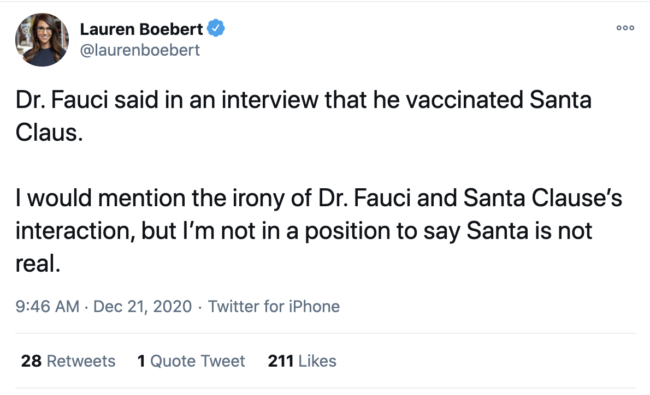 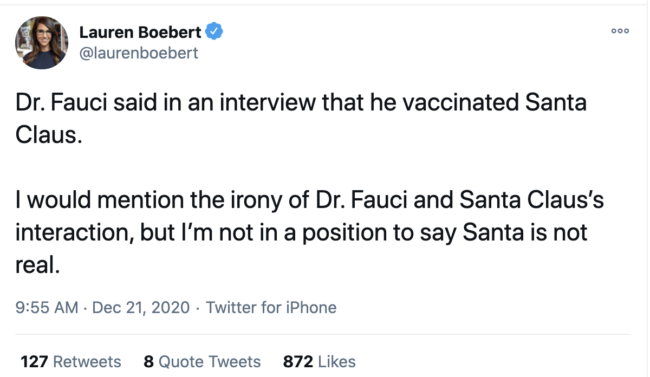 Our first reaction to Boebert’s tweet was similar to this Twitter user who wanted to know if Boebert’s message was some sort of a riddle. It’s true that particularly-clever riddles can appear almost incomprehensible at first glance. But no, this is not a riddle. It just doesn’t make sense.

If it’s a joke, what’s the punchline? Is Boebert insinuating that Dr. Anthony Fauci is not a real person? Would that be funny? Boebert has referenced Fauci numerous times in recent months, so what does that say about her?

Our next reaction, of course, was about Boebert’s decision to out Santa Claus as a fictional character with Christmas Eve just three days away. Hopefully Boebert’s younger children don’t follow her on Twitter.

Our final reaction was to marvel at the use of the word “irony,” which Boebert clearly does not understand. Since it’s the season of giving, we wanted to help. Here’s a definition of “irony” that might make sense to “Q*Bert”:

It is IRONIC that you announced that Santa Claus isn’t real while taking a dig at a guy who was just trying to reassure nervous children about their safety and the existence of a character who inspires hope and belief and the Christmas spirit.

It feels good to give.