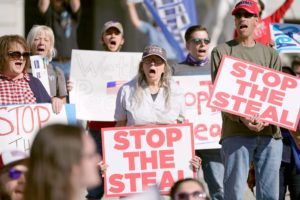 Denver7’s Adi Guajardo reports on the latest attempt by the increasingly unhinged Jefferson County, Colorado Republican Party to join in the distraction so many Republicans are enjoying today, consoling themselves over Donald Trump’s defeat–and in Jeffco, another ballotwide shellacking of Republican candidates–by asserting that elections in Colorado’s foremost bellwether suburban county were “tainted”–by the dead, the moved, and the otherwise ineligible to vote.

Denise Mund, the JeffCo Republican Party Chair, says they used a subscription-based system that helped them scour thousands of records.

“One hundred twenty-eight records were showing up as deceased. We also had a number that were voting from prison facilities, and we also had about 2,500 that had filed a national change of address, and yet they voted here in Colorado,” Mund said.

There’s nothing more stereotypically terror-inducing in the discussion of election fraud than the suggestion of votes being cast from the literal grave. But in the era of all-mail ballots, the opportunity certainly exists for ballots in some limited number of cases to be cast by perfectly healthy living voters who then die in the weeks between casting their ballot and the election. However, when Denver7 started ringing up the “dead people” Jeffco Republicans claimed had voted, they discovered something more basic was amiss.

A lot of these “dead voters” are not dead.

“I was terribly surprised because I’m alive and well,” [Long time Republican Barbara] Pietrafeso said. “I haven’t even been hospitalized.”

She mailed in her ballot and added that she’s been voting since she can remember.

Marilyn VanWagenen was also on the dead voter list. Denver7 drove to her home in Lakewood, checked her ID, and verified her address. She’s lived in her home for 50 years.

“I’m not deceased,” she said. “I think they better have someone — a volunteer, anybody — double-check those lists because it’s obviously incorrect.” [Pols emphasis]

Now first of all, the Jeffco GOP’s press release headline blares “3,000 potentially fraudulent voter records,” but upon closer examination it’s revealed that 2,500 of that 3,000 were flagged due to change-of-address cards filed with the U.S. Postal Service. It’s called a “National Change of Address” card, but it’s reasonable to assume that many of these requests were local area moves or mailing address changes that did not involve a change in residency for voting purposes. Using NCOA records as the basis of fraud claims has already been discredited in a Georgia post-election case due to high error rates and false positives.

As for “a number” who “were voting from prison facilities,” it’s possible that the Jeffco GOP is simply unaware that in Colorado it is perfectly legal for pretrial detainees and misdemeanor convicts to vote from jail. We also don’t disenfranchise felons once they’re out of trouble, which would no doubt annoy the Jeffco GOP if they knew the law. But it seems the Jeffco GOP is under the misconception that they are in Jefferson County Kentucky where disenfranchisement is still a thing.

In a county where the presidential election was won by Joe Biden by almost 70,000 votes, and by John Hickenlooper over GOP Sen. Cory Gardner by over 52,000 votes, none of these claims from Jeffco Republicans come anywhere near changing the results even if taken at unquestioning face value. From there, all it takes is a little kicking of the tires to see that the shrill warnings of fraud in Jefferson County are every bit as meritless as all the other baseless claims since Election Day that have come and gone, and in too many cases live on in disinformed infamy. Jeffco Republicans would be better off sticking to Jenna Ellis’ much grander delusions about Dominion Voting System.

With all of this in mind, we have to ask the question: will Republicans ever be able to have an honest conversation about how they lost Colorado? Not just in 2020, but 2018, 2016, 2012, 2008–years of self-destructive strategy and backward messaging that left Republicans hopelessly alienated from the majority of Colorado voters?

Based on the hell-bent denial of one bellwether county’s Republican Party, it doesn’t look like it.