Lauren Boebert In Total Denial Of Trump Defeat, Of Course 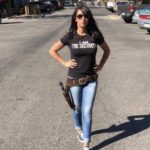 The world may be celebrating Joe Biden’s victory over Donald Trump in last week’s presidential elections, but as readers know there is a faction of hardcore Trump “dead enders” clinging to every word from Rudy Giuliani is what is overwhelmingly considered to be false hope that some late-breaking revelation might swing the election. Reportedly, close associates of President Trump including son-in-law Jared Kushner and First Lady Melania Trump are urging him to concede for the sake of his legacy, while Trump’s pugnacious adult sons tell him to battle on.

Who else is encouraging Donald Trump to not accept the results of the election as called by every credible news outlet in America? Rep.-elect Lauren “Q*Bert” Boebert, you already guessed!

The American people will have the final word, not the media.

The media has no say in when elections are called. Just ask President Gore and President Dewey.

This is going to be one of the biggest weeks in the history of our country.

Want to know how fake the media is?

Every year in UK they celebrate Guy Fawkes Day with fireworks.

The media took clips from the fireworks, which were on Saturday, and claimed they were because they proclaimed Biden the election winner.

And they’re only going to get worse…

Although there’s some back and forth over this today in British media outlets, Guy Fawkes Day was last Thursday, not Saturday night in the U.K.–which was right after Joe Biden was declared the winner of the presidential election Saturday morning in the U.S. Britons may have had leftover fireworks from Bonfire Night, but Biden provided a suitable reason to fire them off–just like the celebrations in cities across the world and the United States including a huge street party in Denver.

We digress. The point is Biden won the election, and most of the world is pretty happy about that. Here in America, it’s true, there are some Trump voters who are less happy–but even most of them are moving on now, because it’s clear that Trump lost and rational people tend to accept such things once they are factually plain.

For Lauren Boebert, elected to Congress in an R+6 district despite it becoming painfully clear on the campaign trail that she is an unqualified mess willing to sing the praises of whatever nonsensical conspiracy theory is fed to her, this is most likely just the first of a long two years of such embarrassments. An “Election 2020 Truther” movement coming out of Trump’s fact-averse presidency is of course inevitable, with a wilder variation of the story certain to merge with the “QAnon” fictional universe to close the loop for the faithful.

All of which will have a torchbearer in Colorado’s Third Congressional District now!