Get More Smarter on Wednesday (October 28) 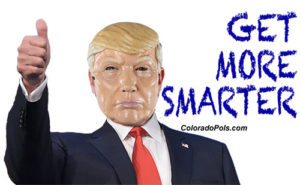 [We’re just going to keep this here]: STOP! If you still have a mail ballot at home, DO NOT DROP IT IN THE MAIL. We are close enough to Election Day that you now need to take your completed ballot to a local collection box; visit GoVoteColorado.com for more information. Let’s Get More Smarter. If you think we missed something important, please include the link in the comments below (here’s a good example). If you are more of an audio learner, check out The Get More Smarter Podcast. And don’t forget to find us on Facebook and Twitter.

► As The Denver Post reports, the COVID-19 outbreak is getting worse in the Denver Metro area:

Denver moved to Colorado’s second-highest level of COVID-19 restrictions Tuesday, forcing most businesses to operate at a quarter of their capacity in an effort to curb the virus’ spread and avoid overwhelming hospitals.

Denver Mayor Michael Hancock announced the state health department had asked the city to tighten its restrictions after weeks of climbing coronavirus cases and rising hospitalizations.

Denver Public Schools followed with plans to send many of the district’s elementary students — who just had returned to their classrooms — back to remote learning.

“I don’t believe this is Denver’s failing,” Hancock said, blaming the virus’s resurgence on the lack of a national strategy to contain COVID-19. “It is, rather, a failing by those who still refuse to believe in science, and those who do not take it seriously.”

Adams and Arapahoe counties are also moving to more restrictive measures in an effort to reduce the number of positive cases.

As The New York Times reports, European counties such as France and Germany are moving toward lockdown status because COVID-19 cases are out of control.

And then there’s this gem from The Huffington Post:

► Ask yourself this question: Would you wait outside for hours — at night — in freezing cold temperatures to listen to anyone speak? Right…now go ahead and argue that Trumpism is NOT a cult. As NBC News reports:

Hundreds of President Donald Trump supporters were left in the freezing cold for hours after a rally at an airfield in Omaha, Nebraska, on Tuesday night, with some walking around three miles to waiting buses and others being taken away in ambulances.

Many of those at the rally at the Eppley Airfield faced hours in long lines to get in and clogged parking lots and busy crowds to get out, hours after his Air Force One departed around 9 p.m. Crowds cleared about 12:30 a.m.

According to dispatches from Omaha Police department, recorded by radio communications platform, Broadcastify, at least 30 people including the elderly, an electric wheelchair user and a family with small children were among those requiring medical attention after hours of waiting in the cold at the rally at the Eppley Airfield.

Former vice president Joe Biden continues to outpace President Trump in two crucial Midwest battlegrounds, currently holding a slight lead over the president in Michigan while showing a much more substantial advantage in Wisconsin, according to a pair of Washington Post-ABC News polls.

The surveys show Biden narrowly ahead of Trump among likely voters in Michigan by 51 percent to 44 percent, with Libertarian Party nominee Jo Jorgensen at 3 percent. In Wisconsin, likely voters favor Biden by 57 percent to 40 percent, with Jorgensen at 2 percent. Among all registered voters, Biden’s edge in Michigan is five points, while he leads by 17 points in Wisconsin.

Wait, what? Biden is up 17 POINTS in Wisconsin?

As Greg Sargent notes in a different story for The Washington Post, Trump is losing ground all across America AMONG WHITE VOTERS. As Colorado Public Radio reports, the Presidential campaigns in Colorado are largely targeting non-white voters in the final week before Election Day.

► The City of Aurora is trying to figure out how many people might have been infected with COVID-19 after being exposed to Mayor Mike Coffman.

He would not only be the first male spouse of a vice president, making him — wait for it, the first second husband — but he has also become the Great Jewish Hope. A winning Democratic ticket would make him the first Jew in the quartet of presidents, vice presidents and their spouses. He’s been called a mensch so many times that it may as well be on his business cards.

► As The Hill reports, the Trump administration is setting fire to everything as hopes dim for a second term:

The Trump administration on Wednesday lifted protections for Alaska’s Tongass National Forest, a move that will expand logging in the nation’s largest old-growth forest.

A notice posted in the Federal Register lifts the so-called Roadless Rule for the Tongass, a Clinton-era prohibition on road construction and timber harvesting on many Forest Service lands.

Under the Trump administration’s changes, the nearly 9.4 million acres of inventoried roadless land in Tongass Forest would once again be considered suitable timberlands.

POLITICO magazine has more on the types of crazy crap that we could still see from a lame-duck Trump.

► Now that Senate Republicans have confirmed Amy Coney Barrett to the Supreme Court, they’re done with trying to do things to help Americans.

► As POLITICO reports, Trump supporters who have been trying to push a widely-discredited narrative about Hunter Biden’s laptop are now changing their strategy to attack news outlets for not reporting on the thing that isn’t real:

Weeks ago, when Rudy Giuluani first threw the contents of Hunter Biden’s alleged laptop online, he promised a trove of even more damning information 10 days before the election.

Yet with less than a week to go, Giuliani, President Donald Trump’s personal lawyer, is still moving down the conservative media food chain, looking for takers.

Maybe this guy is not your best messenger.

► Republican congressional candidate Lauren “Q*Bert” Boebert says that she opposes ALL efforts to push required vaccinations. Definitely the kind of leadership you want in a pandemic.

► Here’s the latest ballot return numbers from Republican polling outfit Magellan Strategies. The short version: Colorado is at nearly 2 million ballots returned. In 2016, about 2.86 million ballots were cast in TOTAL in Colorado.

► The Colorado Sun shows just how much our state’s electorate has shifted since the 2014 election cycle.

► As CBS4 reports, if you thought the 2018 Blue Wave in Colorado was a big deal…just wait until Tuesday.

► El Paso County Republicans are concerned that a crime (or crimes) have been committed, but they can’t be bothered to worry about that right now (even though they reported it in the first place).

► Try to contain your surprise.

► This story about Lauren “Q*Bert” Boebert is worth mentioning thrice.