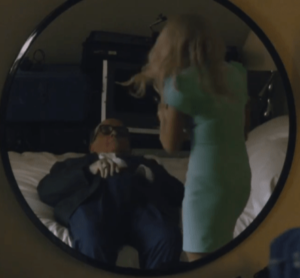 NBC News reports on the wackiest–and ickiest–story in politics today:

In the film, a copy of which was obtained by NBC News, Giuliani and a fictional young female reporter, who was part of Cohen’s sting, can be seen going into a hotel bedroom for drinks — at the woman’s invitation — after completing what the former mayor apparently believed to be a real interview about the coronavirus pandemic and Trump’s response to the crisis…

Giuliani and the woman, recorded by what seem to be hidden cameras, are eventually interrupted by Cohen, who bursts into the bedroom in his Borat persona, shouting: “She’s 15. She’s too old for you!”

On the one hand, no actual minors were involved. Personal attorney to President Donald Trump and former Mayor of New York Rudy Giuliani only thought the woman in the frame capture from Sacha Baron Cohen’s new movie you can see above was underage. It’s our understanding that in some jurisdictions that’s enough to be a crime without further ado, but we don’t pretend to know the law on this either in Colorado or in New York. It’s not something we’ve ever had to explore personally, much like the interior of Rudy Giuliani’s trousers.

On the other hand…let’s stop talking about hands.