The Death of RBG and the SCOTUS Battle Ahead 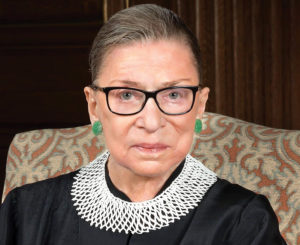 The news came late on Friday of the death of Supreme Court Justice Ruth Bader Ginsburg (RBG). Soon afterward, stories began swirling about the political impact of a Supreme Court (SCOTUS) vacancy just six weeks before Election Day. There is a LOT of news to unpack after a weekend flurry of reports and updates, so we’re breaking it down — Q&A style — into smaller bites of information to aid in digestion.

Q: Before We Get to the Political Stuff, What About the Memorial Service?

The body of Justice Ginsberg will lie in repose outside the Supreme Court on Wednesday and Thursday. A private internment service will take place some time next week at Arlington National Cemetery.

Q: How Soon Will President Trump Nominate a New Justice?

Very soon. Trump says that he will announce a nominee by the end of this week and is encouraging the Senate to act quickly on completing the nomination process before Election Day.

Q: But What About Ginsberg’s Final Request?

According to RBG’s family, here’s her final statement: “My most fervent wish is that I will not be replaced until a new President is installed.”

President Trump wasn’t going to worry about this anyway, but on Monday he suggested that RBG’s last words were written by Democrats. So, not only is Trump going to ignore RBG’s final wish — he’s going to pretend it never happened.

Q: Do We Know Who Trump Will Select for the Vacancy?

Trump has indicated that he will select a woman as RBG’s replacement, and as of today it appears that there are two clear frontrunners: U.S. Circuit Court Judge Amy Coney Barrett and Federal Judge Barbara Lagoa (who also served on the Florida State Supreme Court).

Barrett still seems to be the odds-on favorite, though Florida Republicans are pushing hard for Trump to select Lagoa, in part because of her connections to the Cuban and Latino communities of Southern Florida.

Q: Will the Senate GOP Push for Confirmation Before Election Day?

That appears to be the plan. Senate Majority Leader Mitch McConnell made it clear on Friday evening that the Senate would hold a vote on RBG’s successor as soon as possible.

Q: But What About Everything that Senate Republicans Said in 2016?

You mean, what about the fact that Senate Republicans would be astoundingly-hypocritical for trying to replace RBG so quickly after arguing in 2016 that then-President Obama couldn’t have his choice for a vacancy because it was too close to the next election? As McConnell said in 2016:

“The American people should have a voice in the selection of their next Supreme Court Justice. Therefore, this vacancy should not be filled until we have a new president.”

Many Republicans are already twisting themselves into knots trying to explain away their past statements. For example, here’s what Sen. Lindsey Graham (R-SC) said in March 2016:

“I will support President Trump in any effort to move forward regarding the recent vacancy created by the passing of Justice Ginsburg.”

Naturally, Graham is blaming Democrats for his change of mind. The logic is stupid, but it doesn’t matter; the point here is that many Senate Republicans are perfectly willing to just pretend that 2016’s SCOTUS fight never even happened.

There are a few rays of light for the don’t-be-a-hypocrite team. At least two Republican Senators — Susan Collins of Maine and Lisa Murkowski of Alaska — have spoken out in opposition to pursuing confirmation hearings before the 2020 Election. Collins says the winner of the 2020 election should fill the SCOTUS vacancy. Murkowski retains enough of a conscience that she says she cannot justify moving ahead with a confirmation process when we are closer now to Election Day than we were when this fight first came up in February 2016.

Two more Republican Senators would need to oppose a swift confirmation hearing in order to stall the process for a significant period of time.

Q: What Can Democrats Do to Stop This?

There aren’t a lot of specific tools that the Senate Minority can use since McConnell deployed the “nuclear option” in 2017 to take away the filibuster as a delay tactic. But if the confirmation battle can be extended beyond Election Day, Democrats can change the math somewhat.

Should Republicans force a vote, Senate Democrats are warning that all options will be on the table in 2021, when Democrats may hold majority control of the Senate and the White House.

A SCOTUS confirmation isn’t the only thing on the Senate’s plate for the rest of the year; they also need to come up with a budget agreement to keep the government running and are still getting blitzed with questions about another coronavirus stimulus bill.

Q: What Does the Rest of America Think?

Initial polling results suggest that Americans largely do NOT want the Senate to force a confirmation process this close to an election. As Reuters reports:

The poll found that 62% of American adults agreed the vacancy should be filled by the winner of the Nov. 3 matchup between Trump and Democratic former Vice President Joe Biden, while 23% disagreed and the rest said they were not sure.

Eight out of 10 Democrats – and five in 10 Republicans – agreed that the appointment should wait until after the election.

Americans are also starting to hear from their local news outlets that rushing a confirmation is not the proper way forward. As The Denver Post editorial board wrote on Monday:

We of course disagreed with McConnell then, and we’d disagree with him today, if he weren’t proving himself to be a man without conviction (Gardner has not answered questions about whether he’ll refuse to fill a vacancy weeks before a presidential election and keep voters from having a say).

Less than 24 hours after Ginsburg’s death, McConnell announced (at the end of an email honoring Ginsburg’s service) that the Senate would consider Trump’s nomination. In fact, McConnell’s unabashed willingness to so quickly dispense with his “voters-should-decide” insistence is astounding. It’s the symptom of a man who stands for nothing except playing and winning the political game and the illness is political power. Are the spoils of power in this country so great as to corrupt so absolutely?

If this were not a partisan political fight, the answer would be simple: Wait until after Election Day.

Q: So Where Does that Leave Colorado Sen. Cory Gardner?

Gardner has been consistently cowardly in refusing to comment on just about any important issue facing the country in the last few years, and he has thus far ducked questions about RBG’s successor. Gardner was very outspoken in 2016 about his agreement that a vacant SCOTUS seat could not be filled before Election Day.

Asked his opinion about the high court vacancy, Gardner said the successor to the recently deceased Antonin Scalia “ought be chosen by the American people through the election of the next president.” [Pols emphasis]

Pressed…on what he would say to the argument that he should wait to see who the president nominates, Gardner responded: “Again, I think we’re too close to the election. The president who is elected in November should be the one who makes this decision.” [Pols emphasis]

Obviously, there’s no ambiguity there. Gardner can’t be a loyal Republican soldier without also being a complete hypocrite, though he’s going to get hammered either way:

Judicial Crisis Network announces $2.2 million SCOTUS ad buy in Colorado, Iowa, Maine, North Carolina, Utah, and Washington D.C. to pressure senators to “follow precedent. Confirm the judge.” Expect a lot more where this came from, though ads are expensive this time of year.

For Gardner, the political decision comes down to whether he believes he gets a bigger electoral boost from being a Trump stooge or from being a thoughtful objector. If Gardner’s history is any indication, he’ll do whatever McConnell wants.

Q: Which Political Party Benefits Most from This Unexpected Battle?

You could make a strong argument that RBG’s death will benefit Democrats more than Republicans in the remaining weeks before the election. As The New York Times reports:

Democratic donors gave more money online in the 9 p.m. hour Friday after Justice Ruth Bader Ginsburg’s death was announced — $6.2 million — than in any other single hour since ActBlue, the donation-processing site, was started 16 years ago.

The unprecedented outpouring shows the power of a looming Supreme Court confirmation fight to motivate Democratic donors. The previous biggest hour, on Aug. 20, when Joseph R. Biden Jr. spoke on the final night of the Democratic convention, saw $4.3 million in donations processed, according to an ActBlue spokesperson.

Saturday, after Trump announced he would be nominating a candidate for RBG’s seat this week, ActBlue raised another $70.6 million dollars from 1.2 million contributors. All told in the 28 hours after RBG’s death, ActBlue reported receiving $100 million in donations for Democrats. (I can’t find any reports of an upsurge in GOP fundraising since Friday.) For perspective, Trump and the Republican National Committee raised $210 million in the full month of August. Biden and the Democratic National Committee raised $364.5 million in the same period.

More than 1.2 MILLION people contributed money to Democratic candidates and causes over the course of about two days. Those are BANANAS numbers, indicating that Democrats are responding much more intensely than Republicans.