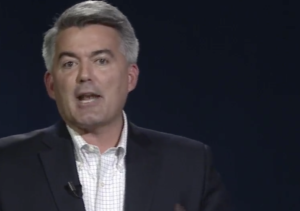 Forty-five days before the fight of his political life, and one day after being thrust into a national spotlight by the death of a Supreme Court justice, U.S. Sen. Cory Gardner addressed the high court’s vacancy for the first time Saturday but declined to say whether President Donald Trump should be able to choose the next justice.

“I hope that before the politics begins — because there will be plenty of time for that — that we have some time for this country to reflect on the legacy of a great woman who rose to our nation’s highest court and the work that she has done for this nation, whether you agree or not,” the Republican senator told Club 20, a Western Slope business group.

On Saturday, Trump tweeted that he intended to go ahead with naming a replacement for Ginsburg despite her dying wish for him to wait…

Coming from Colorado’s famously evasive junior U.S. Senator Cory Gardner, who routinely vilified the liberal justices on the U.S. Supreme Court led by Ruth Bader Ginsburg, in the most charitable interpretation this is an obvious dodge of the question which has been dominating nationwide political discussions ever since word broke late Friday of RBG’s death. Politicians on both sides of the aisle are respectfully eulogizing Ginsburg, and also dealing honestly with the inevitable subject at hand: when RBG will be replaced on the Court, and by who.

If you really believe that Cory Gardner is so affected by the death of Ruth Bader Ginsburg that he can’t comment on the singularly weighty question that follows…well, we’re not going to even worry about it, because nobody believes that. Hiding behind this pretense of mourning, when so many of Gardner’s Republican colleagues are quickly staking out their positions for and against proceeding with a nominee to replace Ginsburg before the next President is sworn in in January, might honestly be considered offensive.

Especially since, as the Sentinel continues, Gardner’s not “pausing” a damn thing:

Zach Hudson, spokesperson for the left-leaning political action committee American Bridge 21st Century, said Gardner is slated to hold a fundraiser Monday with U.S. Sen. Tom Cotton, R-Ark., who has been on Trump’s short list for the Supreme Court in the past. [Pols emphasis]

“Raising money with a potential Trump nominee for the Supreme Court is a disturbing sign for Coloradans waiting to hear form Cory Gardner if he’ll keep his word and let them have a say before filling a lifetime appointment,” Hudson said. “For once, Cory Gardner needs to stand up to Mitch McConnell and Donald Trump and demand the American people have a voice in choosing the next Supreme Court justice.”

Gardner’s pretense is particularly galling because it’s just a new excuse for the same total inability for Sen. Gardner to show leadership on any issue without pre-clearance from Senate Republican leadership. Senate Majority Leader Mitch McConnell has already offered up the talking points for the plain hypocrisy of denying Merrick Garland a vote nine months before the election in 2016 versus rushing to replace RBG six weeks before the election in 2020. Gardner’s unequivocal statements in 2016 that the voters need to weigh in on a lifetime SCOTUS pick have already been undercut–it’s just a question now of whether Gardner will admit this to the state he’s losing by double digits.

If Cory Gardner would just cut the shit and say what everyone knows, he’d be much better off.

But even in the dire straits Gardner finds himself, that’s not who he is.