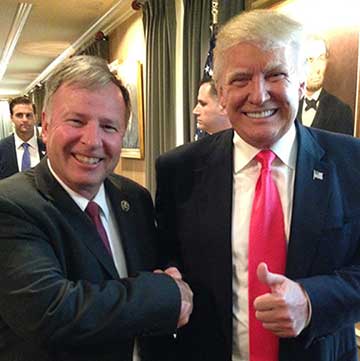 Pam Zubeck at the Colorado Springs Independent has a must-read story up today expounding on a question we’ve been wondering ourselves: will alleged remarks by President Donald Trump in 2018 disparaging fallen American soldiers as “losers” shake up the vote in El Paso County, home to the bulk of the state’s military bases and personnel?

The answer is a definite maybe–depending on where you get your news:

Several other news organizations, including Trump’s favored Fox News, have since substantiated portions of the report. But Trump and his allies labeled the report false, including Congressman Doug Lamborn, R-Colorado Springs, who called the magazine article “more ‘fake news’ such as we have seen many times from the Left.”

“An ugly, baseless and blatant smear by ‘anonymous’ gutless cowards that has been thoroughly refuted by a dozen witnesses who were there at the time, two years ago, is seen for the unethically dishonest fabrication that it is,” Pico says via email…

The short version is, if you’re of a mind to pre-emptively dismiss any negative information about Trump as “fake news,” you’re likely to do that once again in this case. But for at least some retired generals along the Ronald Reagan Highway, these comments are all too believable:

Retired Brig. Gen. Martin France, a 41-year veteran and lifelong Republican, and Democrat retired Major Gen. Irv Halter, who ran against Lamborn in 2014, had plenty to say, however.

“The comments are consistent with past offensive comments about Senator [John] McCain and others,” France notes. “Plus, I think the corroboration has been strong enough to remove any doubt from all but the most committed members of Trump’s cult of personality.” [Pols emphasis]

A Military Times poll released just a few days before Trump’s alleged remarks about dead American servicemen were reported by The Atlantic showed that support for the president has dramatically weakened from the huge majority of military support he enjoyed in the 2016 elections. It remains to be seen how much this shift in support will register in the election in El Paso County, in the presidential race itself or–perhaps more importantly given the likely statewide result–down the ballot.

In the end, it depends on whether individual voters are in the loop for any negative news about Trump.

If they are, and they believe it, the presidential race for them is over.