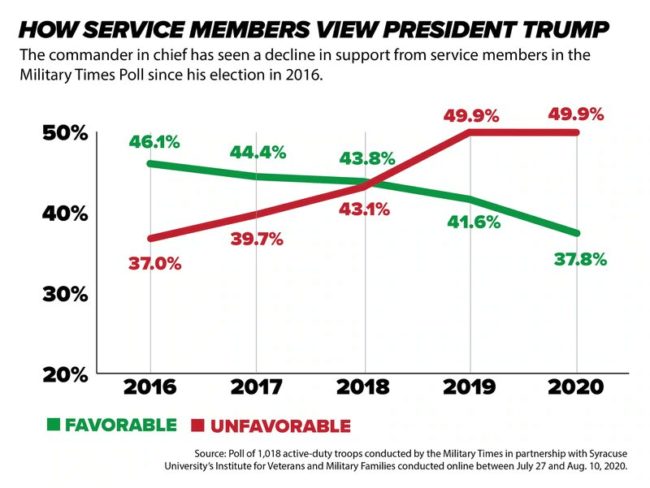 Military Times’ Leo Shane III reports that President Donald Trump is shattering yet another time-honored convention, and this is one Republicans might not appreciate as much: the once predictable support of active-duty servicemen for conservative Republican candidates:

But the Military Times Polls, surveying active-duty troops in partnership with the Institute for Veterans and Military Families (IVMF) at Syracuse University, have seen a steady drop in troops’ opinion of the commander in chief since his election four years ago.

In the latest results — based on 1,018 active-duty troops surveyed in late July and early August — nearly half of respondents (49.9 percent) had an unfavorable view of the president, compared to about 38 percent who had a favorable view.

In a head-to-head matchup Democratic presidential candidate Joe Biden leads Trump 43-37%, which is “close” in a similar way that Diane Mitsch Bush narrowly ahead of Lauren Boebert in the CD-3 race is close. The numbers reflect a very significant underlying shift from previous election cycles just for the Democrat to get to parity, and indicates a constituency that was previously not winnable by Democrats has been put in play. Locally, this could also help Democrats downballot in military-heavy areas of the state like Colorado Springs.