Get More Smarter on Wednesday (September 16)

The Denver Nuggets are in the Western Conference Finals after becoming the first team in NBA history to come back from consecutive 3-1 series deficits. Let’s Get More Smarter. If you think we missed something important, please include the link in the comments below (here’s a good example). If you are more of an audio learner, check out The Get More Smarter Podcast. And don’t forget to find us on Facebook and Twitter.

► President Trump is disputing — despite recordings of his own voice — that he downplayed the coronavirus pandemic by inventing himself a new word: “Up-played.” As NBC News reports:

President Donald Trump told a voter that he did not downplay the coronavirus in the early days of his administration’s Covid-19 response — even though he has been heard on tape saying he did — during an ABC News town hall Tuesday.

“If you believe it’s the president’s responsibility to protect America, why would you downplay a pandemic that is known to disproportionately harm low-income families and minority communities?” a voter asked Trump.

Trump responded: “Yeah, well, I didn’t downplay it. I actually, in many ways, I up-played it in terms of action.” [Pols emphasis] The voter appeared to try to follow up and remind the president that he acknowledged having downplayed the threat of the coronavirus in a taped interview with journalist Bob Woodward earlier this year.

During the town hall, Trump said that many people don’t want to wear masks and claimed that “there are a lot of people think that masks are not good.”

Asked who those people are, the president said, “Waiters. They come over and they serve you, and they have a mask. And I saw it the other day where they were serving me, and they’re playing with the mask. I’m not blaming them. I’m just saying what happens. They’re playing with the mask, so the mask is over, and they’re touching it, and then they’re touching the plate. That can’t be good.”

As The Hill reports, Trump also came up with a new turn-of-phrase regarding one potential approach to combating the pandemic:

President Trump defended his assertion that the novel coronavirus would “disappear” with or without a vaccine on Tuesday, saying the United States would develop what he called “herd mentality.”

“With time it goes away,” Trump said during an ABC News town hall in Pennsylvania when pressed by host George Stephanopoulos on his public comments about the virus. “You’ll develop, you’ll develop herd — like a herd mentality. It’s going to be, it’s going to be herd-developed, and that’s going to happen. That will all happen. But with a vaccine, I think it will go away very quickly.”

Trump was (probably) referencing “herd immunity,” which is a different thing than “herd mentality” (you’re on your own trying to explain “herd-developed.”) Medical experts say that “herd immunity” would require both a vaccine and at least one million coronavirus deaths in the United States; “herd immunity” is thus more of a consequence than a strategy.

► Roughly half of the students at Cherry Creek High School near Denver have been moved to remote learning because of a COVID-19 outbreak being blamed on a weekend party.

► The Colorado Springs Independent looks at the potential election fallout from President Trump’s persistent denigration of the military.

► As The Durango Herald reports, Republican Congressional candidate Lauren “Q*Bert” Boebert is having trouble keeping her origin story straight. This may be partially because her talking points don’t make a ton of logical sense.

► Tuesday’s Primary Election in Delaware was the last Primary of the 2020 election season.

► Florida Sen. Marco Rubio will be in Sedalia on Sept. 26 to raise money for the re-election bid of Sen. Cory Gardner (R-Yuma).

A nurse who worked at an Immigration and Customs Enforcement detention center in Irwin County, Georgia and four lawyers representing clients there are claiming that immigrant women are routinely being sent to a gynecologist who has left them bruised and performed unnecessary procedures, including hysterectomies.

The doctor, who three lawyers identified as Dr. Mahendra Amin, practicing in Douglas, Georgia, has continued to see women from the Irwin County Detention Center for the past several years despite complaints from his patients.

Amin was the subject of a Justice Department investigation in 2015 for making false claims to Medicaid and Medicare. As a result, he and other doctors involved paid $525,000 in a civil settlement, according to the Justice Department.

The lawyers identified the doctor after a whistleblower complaint to the Inspector General for the Department of Homeland Security was filed by Dawn Wooten, who worked as a nurse inside the facility. She said in the complaint that detainees were not getting Covid-19 tests and other needed medical care. The complaint was first reported by the Intercept.

► Congressman Ken Buck (R-Greeley), who moonlights as the State Republican Party Chairman (or vice versa) has nothing better to do than to complain about a French independent film on Netflix.

► Colorado Secretary of State Jena Griswold wants the U.S. Postal Service to pay for a mailer that provides CORRECT information about voting in Colorado to correct an earlier “mistake.”

► Governor Jared Polis talks with Marshall Zelinger of 9News about how the state is handling the coronavirus pandemic.

► More conservation groups are joining lawsuits challenging the Bureau of Land Management for trying to open up oil and gas drilling on public lands.

► It appears that Colorado won’t have much of a problem attracting poll workers in 2020.
► State Rep. Daneya Esgar (D-Pueblo) gets a nice award for her work on issues that affect people with intellectual and developmental disabilities.

► Marianne Goodland of the publication formerly known as the Colorado Statesman looks at new laws in Colorado that officially went into effect on Monday.

► Health officials in Colorado are worried about a rise in cases of COVID-19 among college students. Officials at the University of Colorado-Boulder are asking students to self-quarantine.

► Here’s more proof that Republican efforts to scare people about mail ballots is having an adverse effect on Republican voters.

► As CBS4 Denver reports, common sense is beginning to prevail on vaccinations.

► Budget cuts in Denver will lead to more furloughs for city employees.

► President Trump says the United States came “much closer” to war with North Korea than the public was led to believe. Neat.

► Mother Nature does indeed have a sense of humor. A Republican State Senator in Oregon, who participated in a walkout of the state legislature in 2019 as a protest against a Climate Change vote, has lost his home to the Beachie Creek wildfire.

► Republican Congressional candidate Lauren “Q*Bert” Boebert is using her Facebook page to…remind people of her mugshot from a prior arrest: 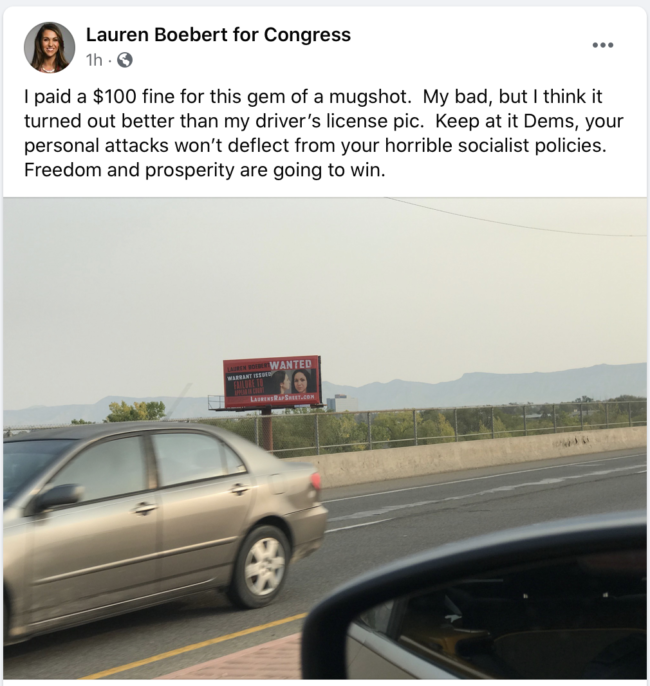 ► It makes total sense, in a completely-nonsensical way, that Republicans would embark on another attempt at recalling Gov. Jared Polis.

► A pro-Trump “youth group” is enlisting teenagers to swarm social media with bullshit messages about Trump and Democrat Joe Biden.