Get More Smarter on Friday (September 11)

There are 53 days until Election Day. Let’s Get More Smarter. If you think we missed something important, please include the link in the comments below (here’s a good example). If you are more of an audio learner, check out The Get More Smarter Podcast. And don’t forget to find us on Facebook and Twitter.

► Both President Trump and his 2020 opponent, Democrat Joe Biden, are visiting Shanksville, PA today to commemorate the 19th anniversary of the 9/11 attacks. The Washington Post looks back at what each candidate was doing on that fateful Tuesday:

Joe Biden was on an Amtrak train on Sept. 11, 2001, when his wife called to tell him about the attacks on the World Trade Center, and when he reached Washington, he grew frustrated that he couldn’t get to the Senate floor for a speech because the U.S. Capitol had been evacuated.

Biden nonetheless found ways to make his point — that institutions like Congress and NATO are bulwarks against such assaults on democracy. “I refuse to be part of letting these bastards win,” Biden said that day.

Hundreds of miles to the north — and four miles from Ground Zero — Donald Trump was sitting in a tower bearing his name, watching CNBC and preparing to call a local TV station to offer his own commentary, including a lament that the stock market was forced to close.

Given the coronavirus pandemic and the racial justice protests, Ishaan Tharoor of The Washington Post wonders if the “9/11 era” is now over.

► As The Denver Post reports, Colorado is doing a better job than the federal government of preventing fraudulent benefit claims:

More than three out of four claims made for unemployment assistance under a program for self-employed workers and independent contractors since July 18 were fraudulent, the Colorado Department of Labor and Employment said Thursday.

“We have prevented $750 million to $1 billion in improper unemployment insurance payments going out the door,” said Cher Haavind, the department’s deputy director during a press call Thursday morning. About $40 million in federal money, however, may have gotten into the hands of criminals.

Revisions to initial claims under the Pandemic Unemployment Assistance (PUA) program for the weeks of July 18 to Aug. 22 showed that of the 62,498 initial claims approved, only 14,292 were deemed legitimate, the department said. And in the two weeks since Aug. 22, the department estimates it has been hit with 40,000 to 50,000 fraudulent PUA claims.

Pandemic Unemployment Assistance was set up under the CARES Act to help individuals who didn’t pay premiums for unemployment insurance but suffered a loss of income due to the outbreak.

As Colorado Public Radio reports, Colorado will soon begin paying out a temporary — and partial — extension of unemployment benefits related to an executive order from President Trump.

► As POLITICO reports, Democrats are out to a big lead in early voting across the country:

Democrats are amassing an enormous lead in early voting, alarming Republicans who worry they’ll need to orchestrate a huge Election Day turnout during a deadly coronavirus outbreak to answer the surge.

Even more concerning for Republicans, Democrats who didn’t vote in 2016 are requesting 2020 ballots at higher rates than their GOP counterparts. The most striking example is Pennsylvania, where nearly 175,000 Democrats who sat out the last race have requested ballots, more than double the number of Republicans, according to an analysis of voter rolls by the Democratic firm TargetSmart.

Maybe it wasn’t such a good idea for President Trump to spend so much time and effort casting doubts about mail ballots.

► As The New York Times reports, wildfires in the Western United States are getting perilously close to large population centers:

The wildfire crisis on the West Coast grew to a staggering scale on Friday, as huge fires merged and bore down on towns and suburbs, state leaders pleaded for firefighting help, and tens of thousands of people were told to evacuate.

Oregon, Washington State and California are enduring a wildfire season of historic proportions, with the firefighting effort compounded by the coronavirus pandemic and misinformation online. At least 15 people have died in the fires, with more expected as teams search through burned homes.

The fires have consumed more than three million acres in California, almost a million acres in Oregon and destroyed entire towns in Washington. The blazes have torn through idyllic mountain towns, reduced subdivisions to beams and embers, and spewed foul smoke-filled air across a region that is home to millions of people.

The Mayor of Portland has declared a state of emergency as a wildfire approaches the city’s suburbs.

► The Grand Junction Sentinel reports on the launch of a campaign promoting a new Vaping Tax in November.

► If you are one of the 9 million people who still haven’t collected their Congressional stimulus payments, the IRS would like to talk with you. They’d like to mail your check to another country (we’re kidding; please don’t audit us).

► As Ernest Luning writes for the publication formerly known as the Colorado Statesman, there are plenty of similarities between the 2014 U.S. Senate race and 2020:

Gardner’s re-election bid is considered an uphill climb because a majority of the state’s voters don’t view Trump favorably — the same as Udall’s campaign was dragged down by Obama’s underwater numbers among Colorado voters. At the same point in September in both election years, 55% of Colorado voters reported unfavorable views of the incumbent president, though Obama posted slightly better favorability numbers than Trump, with 43% compared to the Republican’s 40%.

Just as Democrats’ ads have tied Gardner to Trump, Republicans took every opportunity to link Udall and Obama. In one 2014 ad, Gardner name-checked Obama as frequently as he did the senator he was running against, including calling out Udall’s vote for the then-unpopular Affordable Care Act, which Gardner called “a disaster.”

This year, the tables have turned, with Democratic group’s reminding voters of all the times Gardner voted to repeal the Affordable Care Act and Hickenlooper boasting that he added insurance coverage for hundreds of thousands of Coloradans under the law.

► “I really do believe we are rounding the corner.” This is what President Trump said on Thursday about the coronavirus pandemic in the United States; we will likely surpass 200,000 COVID-19 deaths before the Nov. 3 Election.

► President Trump on Thursday tweeted that CO-3 Republican candidate Lauren “Q*Bert” Boebert has his “Complete and Total Endorsement.” Trump tweeted the same thing on June 30 about Rep. Scott Tipton (R-Cortez), who was defeated in the Primary Election by Boebert.

► As David O. Williams reports for The Colorado Times Recorder, former Gov. John Hickenlooper continues to blast away at Sen. Cory Gardner on the issue of health care:

“Government should only do the things that people can’t do for themselves and having a health plan that includes everybody clearly is beyond the means of many individuals,” Hickenlooper, a Democrat, told RealVail.com. “By many, I’m talking about millions and millions of people, so we can create a public option and there are other savings we can find in our health care infrastructure that’ll help pay for it. It’s not going to cost an arm and leg.”…

…“We maintain the protections for people with preexisting conditions,” Hickenlooper said of national public option that would not be able to exclude people based on previous cases of COVID-19, cancer or other diseases. “Gardner says he’s got a bill for that. But every expert who has looked says it’s a joke.”

Primarily, health care experts who have examined Gardner’s very bare-bones proposal say it doesn’t allow insurers to explicitly exclude customers for preexisting conditions but also doesn’t compel them to provide insurance to those people they way Obamacare does.

“Cory Gardner has been in office for almost six years now and he has no alternative,” Hickenlooper said of his Republican opponent. “He continues to try to take away the Affordable Care Act (Obamacare), continues to take away people’s protections for preexisting conditions, and he has in five years not put forward any kind of a believable, credible alternative. I think that’s government malpractice.” [Pols emphasis]

► How bad are things going for Sen. Cory Gardner’s re-election campaign? Bad enough that it’s considered “good” news when a poll shows that Gardner is “only” losing to Democrat John Hickenlooper by 5 points.

► Democratic lawmakers in Colorado are united in support behind a ballot measure that would provide paid family leave for Coloradans.

► House Democrats are concerned about a $250 million federal contract that seeks to convince Americans that everything is totally fine with COVID-19.

► Colorado’s U.S. Senate race has attracted a lot of out-of-state money, which is something you can probably say about every state with a moderately-competitive race in 2020.

► As Mark Jaffe writes for The Colorado Sun, the state’s oil and gas industry might sprain a muscle from all of its fist-shaking:

► Vox.com looks at why California is having so much trouble with wildfires (HINT: It’s not because they forgot to sweep the forest).

► Perhaps this is a different award? As Bloomberg News reports:

A Facebook ad from the Trump campaign that ran Thursday misspelled the name of the Nobel Peace Prize in huge letters.

In an ad touting Trump’s nomination by a far-right Norwegian lawmaker, a graphic notes that “President Trump was nominated for the Noble Peace Prize,” although the smaller ad copy at the top spells the award correctly. Separately, a Trump campaign fund-raising email depicted the Nobel prize as a large trophy. In fact it’s a small medal.

Trump himself has made the same spelling mistake several times on Twitter in what appeared to be references to the Pulitzer Prize, an award given to journalists. He later claimed that the spelling was intentional sarcasm.

Don’t worry about it, Mr. President. We’re all laughing with you, not at you. 😉 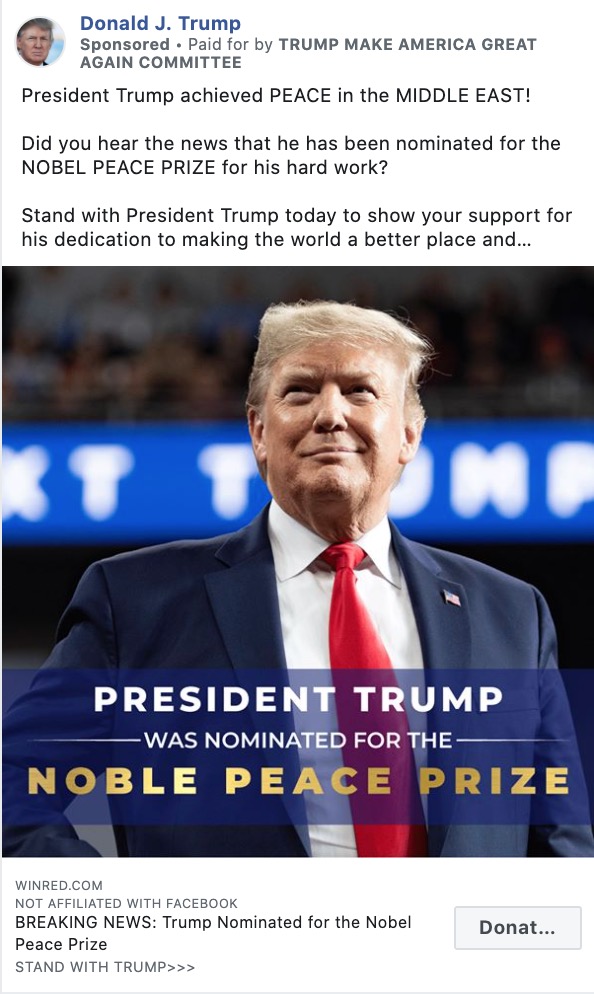 ► What’s the word for that thing where you lose all reasonable perspective in life?

► Senator Cory Gardner (R-Yuma) joins what we like to call the “Pantheon of Dumbassery” with his latest ad. Gardner takes his place alongside all-time awful commercials from the likes of Bob Beauprez and Walker Stapleton.