When Republican Cory Gardner was running for the U.S. Senate against incumbent Democratic Sen. Mark Udall in 2014, his campaign came up with a couple of memorable — if completely disingenuous — television ads that presented the two-term Congressman as a cherubic ball of bipartisan ambition.

Gardner’s 2020 Senate re-election ads have been what we would charitably describe as “not as good,” and that includes his latest spot titled “Only One.” This ad is SO BAD, in fact, that it earns itself a place in the Colorado Pols Pantheon of Dumbassery, alongside Bob Beauprez’s horse’s ass (2006) and Walker Stapleton’s trash can (2018). When you put an ad on the air that makes the exact opposite point that you meant to establish, then you have earned your membership in this dubious club. For example, Beauprez’s infamous “horse’s ass” ad was intended to be a funny bit about how politicians deal with a lot of crap; instead, the lasting image was “Beauprez = horse’s ass.” Stapleton’s trash can ad tried to make a similar argument but failed for the same reason — the lasting impression you got from that spot was “Stapleton = trash.”

This new Gardner television spot, which you can see below, repeats the same attacks Gardner has been pushing for months regarding “ethics problems” for Gov. John Hickenlooper. But it is so poorly produced that it ends up looking like Gardner owns a Maserati sports car (maybe he does, but that’s probably not something you’d want to advertise to voters).

One of the cardinal rules of greenlighting a political ad is that you should watch it once with the sound off and once with only the sound playing; the idea is to help you catch something that might be out of place with your preferred message. Try it yourself — watch this ad without sound and you’ll see what we mean:

We understand what Gardner’s campaign is trying to do here, but they got too cute and it backfired. Gardner is supposed to be “cleaning the dirt” off of Hickenlooper’s fancy car, but the images are completely illogical for most people. No sane person washes someone else’s car by hand. Even at a quick glance, you immediately assume that this is Gardner’s car because you’ve seen this visual — rich white guy washing his expensive car — a thousand times in your life. Maybe the plan for Gardner’s next ad is to show the candidate drinking $1,000 bottles of champagne.

This blunder of an ad continues a troubling trend for Gardner’s campaign in 2020. Gardner’s first big TV spot of the cycle debuted in June and was immediately ridiculed by politicos on both sides of the aisle. This ad, titled “Delight” (?) by the Gardner campaign, showed Gardner pretending to be a psychiatrist listening to a television running clips of Hickenlooper saying he might not enjoy being a Senator. You probably just remember it for the balls of tissue tossed all over the place. 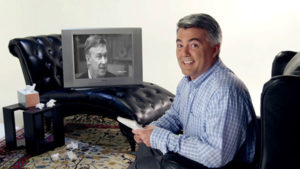 Last month the Gardner campaign rolled out a new spot titled “Beer,” in which Gardner inexplicably reminds voters that Hickenlooper is a former brewpub owner. The message is perfectly on-brand…for Hickenlooper. As we wrote in this space last month:

It’s a pretty solid rule of thumb that if you are talking about one of your opponent’s strengths — in this case, Hickenlooper’s long-spun tale as a brewmaster — then you are most definitely not winning.

And Gardner is most definitely not winning this race. Two recent polls show Hickenlooper maintaining a 9-point lead over Gardner, a consistent lead due in no small part to the fact that the Yuma Republican keeps pounding away on the same ineffective narrative over and over and over again.

As the saying goes (more or less), you can’t shine a turd. You can, however, shine a Maserati. Welcome to the Pantheon of Dumbassery, Cory.