UPDATE: As Eli Rosen of the Colorado Democratic Party points out, you can’t cite yourself as an example of a person being critical of a thing: 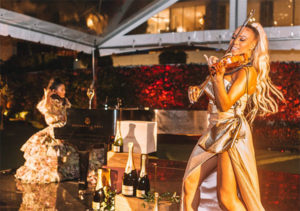 Sen. Cory Gardner was at this event described by “Town & Country” as a “decadent banquet and concert…all for champagne.”

As Ernest Luning reports for the publication formerly known as the Colorado Statesman, Sen. Cory Gardner (R-Yuma) is already taking hits from a new ad campaign highlighting his attendance at a $1,000-a-bottle champagne tasting event in Palm Beach, Florida on February 29:

The leading Senate Democratic super PAC is launching a digital ad campaign in Colorado aimed at Republican U.S. Sen. Cory Gardner’s appearance at an invitation-only party sponsored by the makers of expensive French champagne at a Palm Beach mansion.

“While COVID-19 spread, Gardner was sitting with millionaire socialites, even after being briefed on the pandemic. Sipping $1,000 champagne with a four-course dinner and live musical performances,” the ad says as photos of the February event — including arrows pointing out the back of Gardner’s head — float across the screen.

After noting that a Democratic state lawmaker has filed an ethics complaint over the dinner, the ad concludes: “Call Cory Gardner and remind him he doesn’t work for the millionaires in Florida. He works for you.”

Gardner’s campaign is taking a hard stance that there is no basis to the ethics complaint, as Luning continues:

State Rep. Tom Sullivan, D-Centennial, filed a complaint on April 8 with the Senate Ethics Committee alleging Gardner violated a ban on gifts over $50 by attending the bash, which was sponsored by Krug Champagne and featured performances by pianist Chloe Flower and violinist Ezinma “inspired” by flights of the sparkling beverage, including flutes of the $1,000-a-bottle Krug Clos du Mesnil 2004.

But a Gardner spokesman angrily dismissed the accusation, noting that the Gardner campaign reimbursed the dinner’s sponsors weeks before Sullivan filed his complaint.

Gardner’s campaign paid $350 for Gardner to attend the fancy Palm Beach event, which was not a fundraiser or political event but just a bunch of really rich people hanging around together on a Saturday evening (and he went out of his way to get there after spending the morning in Colorado).

Gardner’s camp had previously said that the campaign did not receive any donations at the time, but it’s hard to argue that connecting with potential donors wasn’t the entire point of the Yuma Republican’s appearance. Republican megadonor Steve Wynn was among the guests in attendance on Feb. 29, which was hosted by prior Gardner donors John and Amy Phelan. Regardless, the outcome of the ethics complaint in this case is almost secondary.

When we discussed this story on April 17, we noted that the advertisements wrote themselves because the optics are SO bad for Gardner here. Somebody at Team Gardner badly miscalculated the risk-reward benefit for this lavish event.