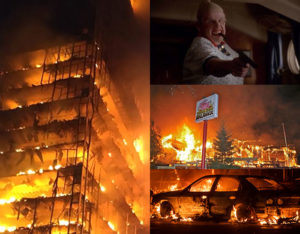 Clockwise from left: Your office, Gary Busey (“Under Siege” reference), your favorite restaurant; your car

The Colorado Republican Party is going all-in on President Trump’s new narrative that everything you know and love has been destroyed because of Joe Biden and the Democrats.

“Small businesses are being burned to the ground,” says a Colorado Republican Committee email. “Homes are under siege. Families are in danger.”

Colorado Republicans are absolutely insisting that “this is the reality…in Democrat-controlled cities across America.”

If you are looking around yourself and wondering why you don’t see everything on fire and your home being looted, you are not alone. According to a new poll from Reuters:

By contrast, most Americans do not see crime as a major priority and do not think it is increasing in their communities, the poll showed. [Pols emphasis]

But that’s not all. To the degree that people do believe in the Republicans’ doomsday scenario, they mostly blame…Republicans. New polling from Quinnipiac University shows that 6-in-10 active voters believe that the United States is worse off than it was in 2016. All of those respondents are presumably aware that Joe Biden has not been the President of the United States since 2016. 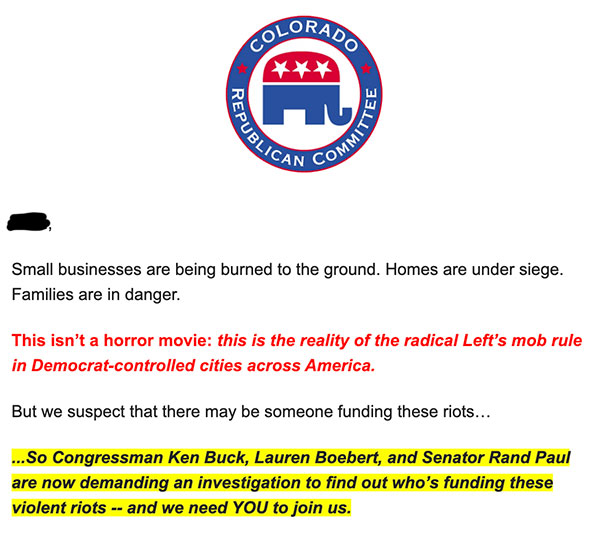 Kellyanne Conway, President Trump’s departing counselor, said on Thursday that Mr. Trump stood to benefit politically from the kind of unrest that erupted this week in Kenosha, Wis., after the police shooting of an unarmed Black man, Jacob Blake.

“The more chaos and anarchy and vandalism and violence reigns, the better it is for the very clear choice on who’s best on public safety and law and order,” Ms. Conway said on “Fox & Friends.”

She had been asked on the program to respond to criticism from the Biden campaign and Pete Buttigieg, the former Democratic presidential candidate, that Mr. Trump was responsible for societal divisions that have been magnified by the protests this summer over police brutality and racial injustice. She told the interviewers she had seen a quote from a Wisconsin restaurant owner to the effect that protesters were actually helping to get Mr. Trump re-elected.

The next step for Republicans is to prop up a specific villain…if they can find one. Congressman Ken Buck (R-Greeley), who moonlights as the State Republican Party Chairman in Colorado, wants an investigation to find out “who is funding these violent riots” (cue George Soros accusation in 3…2…) According to the previously mentioned GOP email, Lauren “Q*Bert” Boebert is also calling for an investigation into something. Kentucky Sen. Rand Paul went one step further, threatening to subpoena “Antifa,” which is both sad and hilarious because “Antifa” is not an actual organization with a business address or a phone number.

If all of this sounds new and terrible, you’re only half-right. As Paul Waldman writes for The Washington Post, Trump’s doomsday scenarios are just an extension of the same sort of fear-based politics that Republicans have boosted for decades:

“A lot of people are looking at what’s happening to these Democrat-run cities and they’re disgusted,” Trump said before he traveled to Kenosha, Wis., where he walked in front of rubble to illustrate the destruction.

The scene, he would have you believe, is the same everywhere Democrats are in charge. “Portland has been burning for many years, for decades it’s been burning,” he claimed, which would be news to the city’s residents, who somehow manage to get from their small-batch locally sourced kombucha cafe to their artisanal bike shop without being engulfed in flames.

And it’s not just Kenosha and Portland, Ore. “There is violence and danger in the streets of many Democrat-run cities throughout America,” Trump said in his convention speech…

…But facts are irrelevant here; what matters is creating anger and fear. And the only difference between Trump’s rhetoric and what we’ve heard from Republicans for a long time is that the implied and the explicit have been reversed. Trump talks constantly about the nightmare of “Democrat” places but leaves out the flip side that Republicans usually emphasize: the superiority of small towns and rural areas and the people who live there.

This is also why Sen. Cory Gardner (R-Yuma) is once again talking about that idiotic failed attempt at secession in 2013, despite the fact that the math absolutely does not add up in his favor. And yes, it’s completely counterintuitive; if you believe that American cities are burning to the ground, then you definitely don’t live anywhere near an American city. Unfortunately for Gardner, the vast majority of Colorado voters do live near cities.

This fearmongering campaign style might help Trump pick up support in certain parts of the country, but it’s not going to be very effective in Colorado. So why do Colorado Republicans do it?

Simple: They don’t have anything else to say.