Total Votes for Secession Likely Less than 2% of Colorado 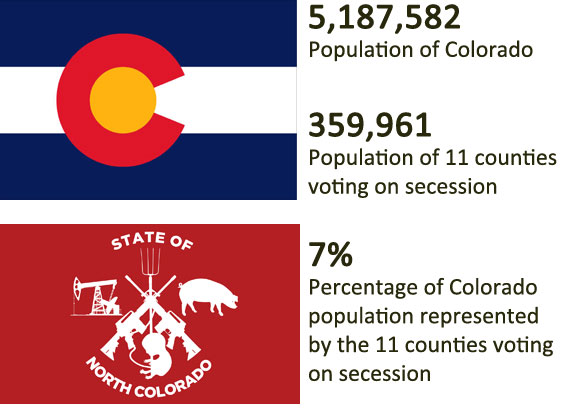 We understand that secession is an interesting topic this Election Day; after all, the idea of trying to secede to form a new state isn't something that you normally find on the ballot. But as conservative politicians increasingly try to distance themselves from the topic, we would remind our friends in the media and around the state to keep the secession effort in the proper perspective.

A vote for secession is a symbol, to some degree, that some rural Coloradans are increasingly frustrated by the growing (and inevitable) population shifts to the Denver Metro area. Yet while 11 counties are voting on secession today, many more rural counties chose not to even put the issue on the ballot. And of those that are voting, their total population represents less than 7% of Colorado's population. Less than half of that 7% will cast a vote one way or the other for secession, and it would take about 60% of those voters to surpass the 100,000 mark.

In other words, the bluster of secession doesn't actually add up to much. When all of the votes are counted, it is quite likely that less than 2% of Coloradans will have voted in favor of seceding and forming a new state. It that still an interesting story? Sure, as a footnote. But as a significant political movement? Nope.