Trump Yanks Pendley, Except Not Really 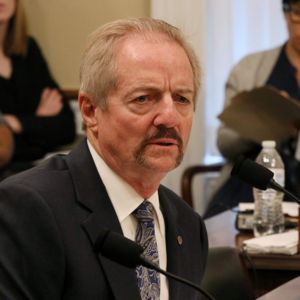 Colorado Public Radio reports on what could be considered an admission of defeat by the Trump administration, the announcement this weekend that interim Bureau of Land Management director William Perry Pendley will not be formally nominated for the position–but news that Pendley will continue to run the BLM in the interim capacity he has controversially held for a year now is making this announcement harder to celebrate:

The White House is expected to withdraw William Perry Pendley’s nomination to be director of the Bureau of Land Management, a White House official confirms. The move comes as a chorus of voices have raised objections or concerns about the nomination in recent weeks.

Pendley will remain the agency’s number two. The Deputy Director for Policy and Programs will still continue to “exercise the authority of the director” and lead the public lands agency.

“The President makes staffing decisions. Mr. Pendley will continue to lead the Bureau of Land Management as Deputy Director for Programs and Policy,” a spokesperson for the Department of the Interior said Saturday…

Back in June, despite a lawsuit from the Public Employees for Environmental Responsibility demanding that Pendley either be put up for confirmation by the U.S. Senate or replaced, Interior Secretary David Bernhardt indefinitely extended Pendley’s interim directorship via a questionable unwritten order. The Grand Junction Sentinel’s Dennis Webb reported then:

Pendley has been serving as BLM acting director since last July, based on orders by Interior Secretary David Bernhardt delegating the authority to run the agency to Pendley, and then repeatedly issuing orders extending that delegation. Pendley’s latest, monthlong extension ran through Friday…

As acting director, Pendley has overseen the BLM’s relocation of most of its jobs in Washington, D.C., to various locations out West, including its new headquarters in Grand Junction.

Unlike in the case of the past orders from Bernhardt, no expiration date applies to the succession order for Pendley, and Bernhardt issued no written order on the matter.

The announcement by President Donald Trump that Pendley would be formally nominated, the first BLM nominee submitted by the Trump administration after over three years in office, was met by a hailstorm of pent-up criticism–and nervous admissions even from Republican allies like Sen. Cory Gardner that Pendley would face “tough questions” in his confirmation hearing about Pendley’s career-long advocacy for the mass liquidation of public lands.

The good news, obviously, is that Pendley will not be nominated to formally lead the BLM. The bad news is Pendley apparently isn’t going anywhere, and the oversight the Senate is supposed to exercise over this important executive branch appointment remains thwarted. You’d think Cory Gardner would be upset about not being able to ask his “tough questions” of Pendley. After all, haven’t they been valid questions for as long as Pendley has been in his job as “interim” director of the BLM? Shouldn’t Gardner join with Democrats in demanding that Pendley be ousted if he’s not going to be confirmed?

When that doesn’t happen, you’ll know all you need to know.