Will Gardner Be Left Holding the Bag on Pendley? 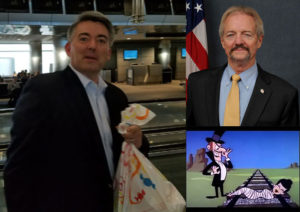 Colorado Sen. Cory Gardner (R-Yuma) has been an unapologetic supporter of Donald Trump since the Big Orange Guy was elected President in 2016. Trump famously confirmed Gardner’s loyalty at a Colorado Springs rally in February when he told the crowd that Gardner “has been with us 100%” before adding, “There was no waver with Cory and we appreciate that.”

Gardner is seen locally and nationally as a dedicated Trump toadie, and the Yuma Republican has validated that perception every week. Gardner didn’t blink when Trump was impeached by the House of Representatives and even opposed hearing testimony from other witnesses during the Senate impeachment trial. Gardner stood up for Trump amid reports that Russia put financial bounties on the heads of American soldiers; he supported Trump’s unilateral ability to start wars with foreign countries; and he praised Trump for his “response” to the coronavirus pandemic. When former Defense Secretary Jim Mattis criticized Trump, Gardner literally laughed out loud. Gardner looked the other way as Trump pardoned Roger Stone in what commentators have called one of the most corrupt acts in the history of the White House. When Trump had peaceful protestors in Lafayette Park gassed so that he could take a picture with an upside-down Bible, Gardner did the same thing he always does: Nothing.

No matter how corrupt or racist or just flat-out ridiculous Trump gets, Gardner never wavers in his support for the President. But he’s now facing a difficult dilemma regarding a Trump nominee who has been overseeing a department that Gardner has made into a signature issue of his own: Moving the headquarters of the Bureau of Land Management (BLM) to Grand Junction. As a member of the Senate Committee on Energy and Natural Resources, Gardner will soon need to vote on Trump’s nomination of William Perry Pendley as the official Director of the BLM.

Will Gardner again follow Trump’s wishes, or will he actually oppose a horribly-flawed nominee to head up the BLM? As POLITICO explained last week:

By nominating William Perry Pendley to be director of the agency, Trump has forced three vulnerable GOP incumbents — Sens. Steve Daines of Montana, Cory Gardner of Colorado and Martha McSally of Arizona — to either defy the White House and oppose Pendley, or support him and risk throwing away any political benefit they got from passing the Great American Outdoors Act, H.R. 1957 (116), by installing someone to oversee the nation’s public lands who spent decades advocating to sell them off…[Pols emphasis]

…Pendley, who became deputy director for policy and programs at BLM last year under a secretarial order, has been among the most controversial appointees at Interior since he has in the past called for selling off federal lands, referred to undocumented immigrants as cancer and dismissed the Black Lives Matter movement as based on “a lie.” Pendley also leads the department as it completes its controversial reorganization that moved its headquarters to Grand Junction, Colo., a push led by Gardner.

Pendley has served as the “interim” BLM director for more than a year now; Trump finally nominated him for the full-time position just last month. Pendley is not an unknown entity in Washington D.C. or Grand Junction or anywhere that people are concerned about the management of public lands. Pendley’s anti-public lands positions are so well known, in fact, that Montana Gov. Steve Bullock just filed a lawsuit to stop Pendley from continuing in his interim role at the BLM.

But in Gardner’s typical weaselly fashion, he is now pretending that he has serious concerns about Pendley’s record as a proponent of selling off public lands altogether:

.@SenCoryGardner says William Perry Pendley, who’s been nominated to head the BLM, will face some tough questions if he wants to the job. Gardner’s question: “Do you support selling public lands? That’s a non-starter.”

Pendley will certainly be asked if he supports selling public lands, but every single member of the Senate Committee on Energy and Natural Resources ALREADY KNOWS THE ANSWER TO THIS QUESTION.

The editorial board of the Grand Junction Daily Sentinel summarized Pendley’s anti-public lands background in a forceful anti-Pendley Op-Ed earlier this month:

His baggage is well-known. [Pols emphasis] As president of the conservative Mountain States Legal Foundation, he consistently questioned the existence of public lands. “The Founding Fathers intended all lands owned by the federal government to be sold,” he wrote in a 2016 piece for the National Review.

As recently as January 2019, Pendley tweeted that the president could sell public lands to pay for the border wall…

…Pendley has been the face of a fringe movement against federal ownership of public lands, only to be nominated as one of the country’s chief custodians of public lands.

The Sentinel and everybody else who has paid even a lick of attention to the BLM knows that “Pendley has managed to disqualify himself from the position.” Opposing Pendley’s nomination as the full-time BLM director should be a no-brainer decision for Gardner, but Gardner is the same guy who once said of Trump, “I cannot and will not support someone who brags about assaulting and degrading women.”

It would seem incompatible that Gardner might continue his greenwashing quest and support Pendley for BLM Director. Will Gardner do the right thing…or will he do what Trump wants? If history is any guide, we already know this answer, too.