It’s Called “Greenwashing,” And Cory Gardner Is Lathering Up 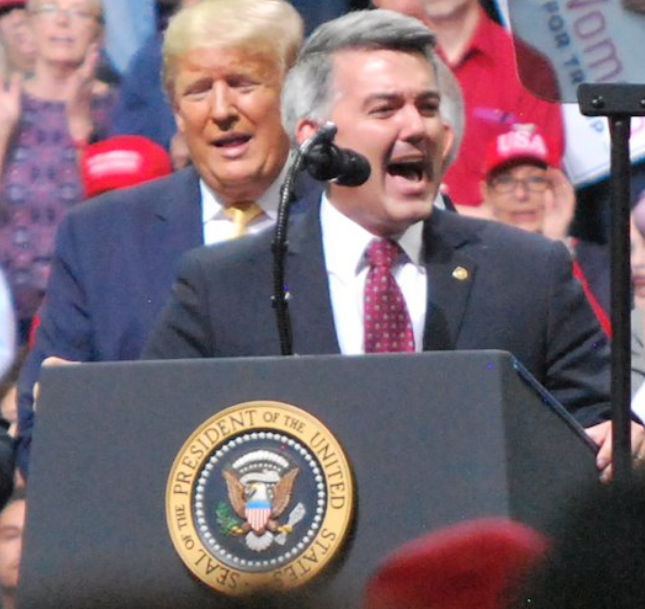 The Denver Post’s Bruce Finley reported yesterday on a green light from GOP Senate Majority Leader Mitch McConnell to allow passage of the Great American Outdoors Act, legislation to permanently fund the Land and Water Conservation Fund and provide cash to chip away at the huge backlog of maintenance and other projects on public lands:

Colorado senators are leading a congressional push to pass landmark conservation legislation that would deploy $9.5 billion to maintain overrun national parks and permanently direct $900 million a year for outdoor recreation on public lands.

President Donald Trump has said he will sign this Great American Outdoors Act if lawmakers get it to his desk. Senators this week took up the issue, aiming for a vote next Tuesday, and around 200 House members have said they’ll support similar legislation…

Down by double digits in a blue state, GOP Sen. Cory Gardner of Colorado is banking on this legislation to attract any undecided Colorado voters out there who might be swayed by support for the environment. Because the legislation has literally dozens of co-sponsors including Colorado’s other Sen. Michael Bennet, Gardner is taking credit largely for convincing Majority Leader Mitch McConnell to allow a vote–which instantly raises questions about an election-year ulterior motive. Under questioning from former local now-national Scripps reporter Joe St. George yesterday, Mitch McConnell didn’t try very hard to downplay this possibility:

[St. George] asked McConnell about the timing of the bill Tuesday.

“Did you hand them an election-year gift by allowing this to go forward five months before Election Day?” Scripps National asked McConnell.

“Well, what we had was a unique opportunity to actually make a law,” McConnell said.

“Yeah, it is in proximity to the election, but nobody said you should quit doing things just because there is an election [Pols emphasis] – we have one every two years,” McConnell said.

And as Roll Call reported earlier this week, the political motives of this bill moving at this time are well-understood inside the Beltway:

Gardner is in a tight race in Colorado against former Gov. John Hickenlooper, a Democrat, in a state that has a massive outdoor economy. Daines is in a competitive race in Montana against Gov. Steve Bullock, a Democrat. CQ Roll Call includes both of them in its most recent list of the 10 most vulnerable senators. Inside Elections with Nathan L. Gonzales rates the Colorado Senate race Tilt Democratic and the Montana contest Lean Republican.

Senate Majority Leader Mitch McConnell agreed to bring the bill for a vote and filed cloture on Thursday. The bill’s passage could help his chances of holding on to a GOP majority in that chamber by offering Gardner and Daines an opportunity to win over moderate voters who support investments in public lands…

President Donald Trump has lent his support to Gardner and Daines, praising them in a March tweet for their conservation efforts and urging Congress to pass a bill that “fully and permanently” funds the LWCF and restores national parks.

Trump’s call contradicts his own budget request for fiscal 2021, which proposed a 97 percent funding cut to the politically popular fund. [Pols emphasis]

This of course is where Gardner’s “greenwashing” strategy of trying to spuriously appeal to environment-minded swing voters breaks down. Yes, permanently funding the LWCF is a good thing–that’s why the bill has almost 60 bipartisan cosponsors. But in the context of the Trump administration’s much larger assault on environmental protections of all kinds, a huge list of misdeeds from weakening the Clean Water Act to using COVID-19 as an excuse to let polluters pollute without penalty to putting a “Sagebush Rebellion” firebrand in charge of the Bureau of Land Management, throwing some money at the maintenance backlog at national parks, as worthwhile as that may be, feels like an insulting diversion.

For Cory Gardner, this isn’t just a case of too little, too late. No one who cares about this issue will be persuaded to support him because of this one piece of legislation. Everyone knows where Donald Trump stands, and more importantly where Cory Gardner stands in relation to Trump. And when Trump smeared the wind power industry that employs thousands in Colorado, on stage in Colorado Springs right in front of a cheering Cory Gardner, the message to every environmental-minded voter in our state was unmistakable.

Between now and Election Day, very much like Cory Gardner’s struggle to live down his anti-abortion record in 2014, Gardner’s “moderation” on the environment is going to become aggressive. We may even see Gardner triangulate off some negative action Trump takes to add some drama, which would be more notable for not having occurred up to that time. Gardner will maintain this fiction right to the end, and just like on abortion he’ll never slip under questioning.

But this year, on both of these issues, Gardner can no longer hide behind hypotheticals.