Get More Smarter on Thursday (August 6)

Happy Independence Day to our friends in Bolivia and Jamaica, respectively. Please celebrate responsibly. Let’s Get More Smarter. If you think we missed something important, please include the link in the comments below (here’s a good example). If you are more of an audio learner, check out The Get More Smarter Podcast. And don’t forget to find us on Facebook and Twitter.

► The New York Attorney General has filed a lawsuit seeking to dissolve the National Rifle Association (NRA) because of widespread fraud. As The Washington Post reports:

The chief executive of the National Rifle Association and several top lieutenants engaged in a decades-long pattern of fraud to raid the coffers of the powerful gun rights group for personal gain, according to a lawsuit filed Thursday by the New York attorney general, draining $64 million from the nonprofit in just three years.

In her lawsuit, Attorney General Letitia James called for the dissolution of the NRA and the removal of CEO Wayne LaPierre from the leadership post he has held for the past 39 years, saying he and others used the group’s funds to finance a luxury lifestyle.

She also asked a New York court to force LaPierre and three key deputies to repay NRA members for the ill-gotten funds and inflated salaries that her investigation found they took.

James accused the NRA leaders of flouting state and federal laws and signing off on reports and statements they knew were fraudulent, while diverting millions of dollars away from the NRA’s charitable mission to benefit themselves and their allies.

Meanwhile, D.C. Attorney General Karl A. Racine announced Thursday that his office filed a separate lawsuit against the NRA Foundation, which is based in Washington. Racine accused the organization of being a puppet of the NRA, despite legal requirements that it independently pursue charitable purposes. Instead, Racine found, the foundation repeatedly loaned the NRA money to address its rising deficits.

The NRA will no doubt fight this lawsuit…with whatever money they have left:

► For the third week in a row, Senate Republicans will likely be headed home — this time for a longer break — without making any progress on another coronavirus relief bill. As POLITICO reports:

The Senate will technically stay in session next week but will not hold any votes unless there is a breakthrough in coronavirus negotiations. That means senators — like their House counterparts — will be back home, waiting for word from the leadership whether a deal has been reached…

…The senators’ departure from Washington despite a tentative Friday deadline signals just how far apart Democrats and the White House remain on reaching an agreement. The coronavirus pandemic has killed more than 157,000 Americans, while tens of millions more are unemployed. The Labor Department reported Thursday that 1.19 million people filed for unemployment benefits last week in state programs, a decline from previous weeks but still a sign that the economy is showing little sign of improving.

The report was the first since a federal $600 weekly unemployment benefit allocated in March’s $2 trillion CARES Act officially expired.

Senate Majority Leader Mitch McConnell is still blaming Democrats for his chamber’s failure to come up with any sort of a relief plan…even though McConnell himself somehow isn’t even involved in the negotiations anymore.

For the “glass half full” types out there, a planned meeting on Thursday evening may break the deadlock somewhat.

► Congressman Ken Buck (R-Greeley), who moonlights as the State Republican Party Chairman (or vice-versa) is using the Colorado GOP mailing lists to sell copies of his new book. Drain the swamp, indeed.

► The Get More Smarter Podcast reached its 50th Episode this week. Tune in below:

► The New York Times takes a deep dive into understanding how the United States so thoroughly botched its response to the coronavirus pandemic:

How did this happen? The New York Times set out to reconstruct the unique failure of the United States, through numerous interviews with scientists and public health experts around the world. The reporting points to two central themes.

First, the United States faced longstanding challenges in confronting a major pandemic. It is a large country at the nexus of the global economy, with a tradition of prioritizing individualism over government restrictions. That tradition is one reason the United States suffers from an unequal health care system that has long produced worse medical outcomes — including higher infant mortality and diabetes rates and lower life expectancy — than in most other rich countries.

“As an American, I think there is a lot of good to be said about our libertarian tradition,” Dr. Jared Baeten, an epidemiologist and vice dean at the University of Washington School of Public Health, said. “But this is the consequence — we don’t succeed as well as a collective.”

The second major theme is one that public health experts often find uncomfortable to discuss because many try to steer clear of partisan politics. But many agree that the poor results in the United States stem in substantial measure from the performance of the Trump administration.

As documented by CNN fact checker Daniel Dale, Trump told Rivera that Biden is “against the Bible” while calling into his Cleveland radio show.

“That may be a little harsh,” replied Rivera.

Biden, as Dale notes, is a lifelong practicing Catholic. Trump, on the other hand, never publicly identified as a Christian until he started running for president in 2015, and he raised eyebrows when he said that he had never asked God for forgiveness, which is a central tenet of Christian doctrine.

As we all know, President Trump loves the Bible so much that he can read it upside down and backward: 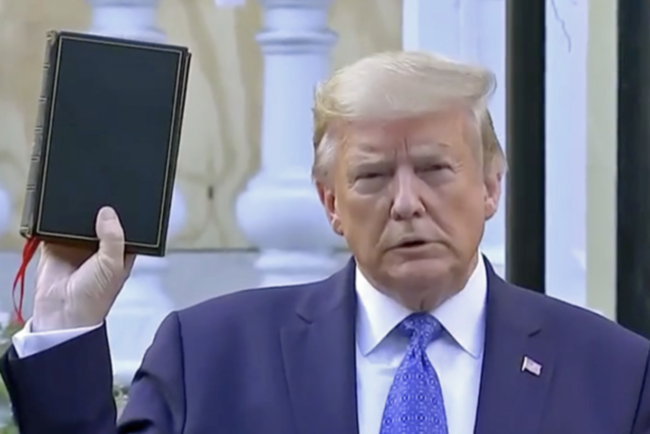 ► If you are interested in contracting COVID-19, then 9News has a list of places you should visit very soon. Or just go to Sterling, Colorado.

► Count your blessings that you are not the new Chief of the Aurora Police Department.

► With help from a few well-known Colorado Republican operatives, rapper Kanye West will be listed on Colorado’s ballot under “President of the United States.”

► Congresswoman Diana DeGette (D-Denver) wants to know when the Trump administration will announce a plan for vaccinating the U.S. population against the COVID-19 virus. We’re guessing that will come sometime between the end of this month and never.

► 9News confirms that Douglas County is being run by a bunch of monkeys.

► A national coalition of health experts and advocacy groups are calling on states like Colorado to return to stay-at-home orders to slow the spread of coronavirus.

► The Colorado Sun looks at how various school districts in the state plan to do their learning this fall:

Colorado districts have received rounds of guidance from the state this summer as they’ve undergone a grueling decision-making process for how to start the school year — a process that has been riddled with uncertainty as the pandemic has evolved. Guidance from state education and health officials has urged districts to consider strategies like cohorting, masks for students age 11 and older, and limiting high school class sizes for social distancing purposes, but state officials also realize different schools and districts will have to adopt health precautions and learning models that meet their needs. With Colorado’s emphasis on local control, districts are making their own decisions about how to kick off the fall semester, relying on local health departments to help determine the safest way to conduct classes.

Gov. Jared Polis has not issued any executive orders for school operations in the fall, but last week he deemed opening schools in Colorado “reasonably safe” and said he is sending his own children back to school.

Just how safe depends on individual communities and what kinds of practices schools or school districts can put in place, said Dr. Glen Mays, chair of the Department of Health Systems, Management and Policy in the Colorado School of Public Health.

► The Denver Post has more on an investigation into the athletic department at Colorado State University over alleged instructions to gloss over COVID-19 precautions.

► If you’re going to be in the area of Glenwood Springs today, you might want to check traffic reports to make sure there are no new closures related to a wildfire.

► The Regional Transportation District (RTD) is considering more service cuts and a dip into its FastTrack reserves as it tries to figure out how to step the financial bleeding.

► Vox.com explains how and why President Trump is suing the State of Nevada for trying to make it easier for people to vote.

► Bravo to The Onion:

► Senate Republicans are putting tens of millions of dollars into television advertising campaigns in five states…but Colorado is not one of them. That’s sobering news for Sen. Cory Gardner (R-Yuma).

► As The New York Times reports, the walls keep closing in on President Trump:

The New York prosecutors who are seeking President Trump’s tax records have also subpoenaed his longtime lender, a sign that their criminal investigation into Mr. Trump’s business practices is more wide-ranging than previously known.

The Manhattan district attorney’s office issued the subpoena last year to Deutsche Bank, which has been Mr. Trump’s primary lender since the late 1990s, seeking financial records that he and his company provided to the bank, according to four people familiar with the inquiry.

The criminal investigation initially appeared to be focused on hush-money payments made in 2016 to two women who have said they had affairs with Mr. Trump.

But in a court filing this week, prosecutors with the district attorney’s office cited “public reports of possibly extensive and protracted criminal conduct at the Trump Organization” and suggested that they were also investigating possible crimes involving bank and insurance fraud.