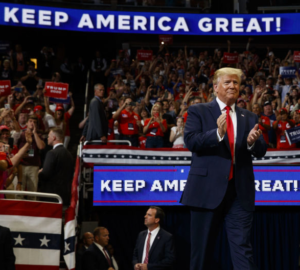 Political news this Sunday morning is dominated by a statement made by Donald Trump at least night’s re-election rally in Tulsa–a statement that, if true, could be the most damning admission ever made by a sitting American President:

In a shocking admission during his Tulsa, Oklahoma, rally on Saturday night, President Donald Trump said he had told officials in his administration to slow down coronavirus testing because of the rising number of cases in America, and used a racist term to describe the coronavirus.

“You know testing is a double-edged sword,” Trump said while complaining about press coverage of his handling of the virus. Claiming the US has now tested some 25 million people, he added: “Here’s the bad part … when you do testing to that extent, you’re going to find more people; you’re going to find more cases. So I said to my people, slow the testing down please.” [Pols emphasis]

It was a stunning revelation given that nearly 120,000 people have died in the United States from the coronavirus and medical experts have long said that testing is critical to identifying cases, tracing them and stopping the spread of the virus.

Trump adviser Peter Navarro tried to walk it back this morning, sort of, except not really:

“I don’t know if it was [tongue in cheek],” responded CNN’s Jake Tapper on CNN’s “State of the Union” on Sunday morning. Responded Navarro, the White House trade adviser: “Thirty million people are unemployed, and we’ve seen over 100,000 people die because of the China, Wuhan virus,” Navarro said, using terms for the virus popular among some Trump backers. “Let’s talk about some serious issues, Jake.”

But the question of whether the Trump administration may have deliberately sought to know less about the COVID-19 pandemic, thus thwarting by design any real attempt to contain the spread of the disease, is a deadly serious matter. The administration’s early response to the pandemic is a story of exactly this kind of denial–routinely downplaying the severity of the situation, and insisting that cases were declining when they were not. As for concealing the extent of the problem by deliberately not testing people, that’s a tactic we’ve already seen in Colorado after tests promised by Sen. Cory Gardner and Vice President Mike Pence himself of meatpacking workers at the JBS plant in Greeley was halted after finding “too many” positive results.

The scariest part about this statement isn’t how it is outrageous beyond belief. It’s scary because it is not just plausible, it appears to explain events as they transpired. Trump didn’t want to know then, and doesn’t want to know today how bad the pandemic really is.

And where does this admission leave Trump’s most indefatigable local defender, Sen. Cory Gardner? Remember what Gardner said about COVID testing back in April, and then ask yourself what Gardner is thinking today:

“Testing absolutely is key here,” Mr. Gardner said on “Fox & Friends.” “I’d like to see testing so ubiquitous going forward that you can go buy your Big Gulp at 7-Eleven, and you can get your COVID-19 test at the same time.”

Well folks, it looks like the White House has adopted a different strategy than tests with every Big Gulp.

Because Donald Trump, by his own admission, doesn’t want to know if they’re sick.

How can anyone with a conscience, or even Cory Gardner, allow this deadly charade to continue?