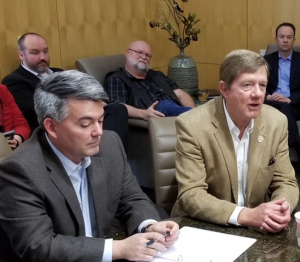 Scott Miller at the Vail Daily reports on a renewed effort by Colorado Democrats in support of legislation to protect 400,000 acres of public land in Colorado–legislation presently getting the brush-off from Sen. Cory Gardner as he tries to focus attention on the Great American Outdoors Act that Senate Majority Leader Mitch McConnell has allowed in his infinite election-year generosity to receive a vote:

The Colorado Outdoor Recreation and Economy Act, a large public lands bill now languishing in the U.S. Senate, was the focus of a Friday campaign event held by John Hickenlooper, the former two-term Democratic governor running this fall for the Senate…

…The bill has broad local support from county commissioners, outdoor businesses, conservationists, and ranchers, including the counties of Eagle, Summit, San Juan, Ouray, San Miguel, Gunnison, and Pitkin and the towns of Glenwood Springs, Carbondale, Ridgway, Crested Butte, Ophir, Telluride and Basalt. The bill will preserve approximately 400,000 acres of public land in Colorado, including nearly 100,000 acres in the White River National Forest and wild areas across the Continental Divide in Summit and Eagle counties.

Although the bill to fund the Land and Water Conservation Fund got much of the attention last week, and not undeservedly being legislation overwhelmingly supported including by Sen. Cory Gardner’s Democratic counterpart Michael Bennet, the Colorado Outdoor Recreation and Economy Act (CORE Act) with its specific protections for public lands in Colorado is getting the shaft from Republicans from President Donald Trump on down despite very broad local support.

Although Gardner is counting on the relatively controversy-free Great American Outdoors Act to triangulate off the abysmal Republican brand on environmental protection running in a state that places a high value on conservation, the CORE Act is a potent counterargument that Gardner’s support for low-hanging environmental protections is a veneer over the same old servility to the fossil fuel industry and other for-profit interests.

Colorado Democratic Party spokesperson Eli Rosen said in a statement Thursday that Gardner is trying to “greenwash his abysmal environmental record just in time for the election. Gardner has worked in lockstep with President Trump against new Colorado wilderness, to roll back protections for clean air and water, and to undermine efforts to combat climate change. While local leaders in Colorado have worked for more than a decade to pass the CORE Act, Gardner continues to be a puppet for his party leaders and refuses to deliver.” [Pols emphasis]

Prompting another noncommittal sidestep from Gardner:

“I’m not holding it up. I’m not objecting to it,” Gardner said. [Pols emphasis] “We’ve given some suggestions that we think can make it better, but it’s Senator Bennet’s bill in terms of that.”

Because Republicans are already and pretty much irrevocably considered the party of “drill baby drill” and climate change denial, Gardner starts from a major disadvantage in terms of winning over any swingable voters for whom the environment is a high-scoring issue. Much like Gardner’s call for “over-the-counter birth control” to distract from his career-long support for banning abortion even in cases of rape or incest, the strategy is intended to conceal, or at least redirect the conversation from, the much bigger liability.

As is so often the case, the proof is in what you don’t do.