Get More Smarter on Wednesday (June 3)

Today is World Bicycle Day, which is probably terrifying to those folks who believe in a massive United Nations-bicycle conspiracy. Now, let’s Get More Smarter. If you think we missed something important, please include the link in the comments below (here’s a good example). If you are more of an audio/visual learner, check out The Get More Smarter Show or The Get More Smarter Podcast. And don’t forget to find us on Facebook and Twitter.

► American military leaders are speaking out in opposition to President Trump’s statements on Monday that he would use armed soldiers to quell protests across the country. As The Washington Post reports:

Defense Secretary Mark T. Esper said Wednesday that he does not support the use of active-duty military forces in quelling countrywide unrest — a statement that puts him at odds with President Trump, who has threatened to send troops into U.S. cities.

Esper’s announcement comes after a week of increasingly violent unrest gave way to largely peaceful protest Tuesday evening. Brutal clashes between police and the public seemed to subside, and there were only sporadic reports of looting and other mayhem across the nation.

As CNN reports, Esper probably moved closer to getting fired by President Trump, but at least he’ll maintain something of a conscience.

Democratic Senators are also warning the White House not to proceed with the forceful use of military personnel on American streets and to invoke the Insurrection Act. From POLITICO:

“In short, we oppose in the strongest terms the use of the U.S. military to impede the First Amendment rights of Americans,” the senators wrote. “In cases where there is a need for additional security, state and local law enforcement, with support from the state National Guard, who live with and within the communities they serve, under the control of each state, are fully capable of responding.”

And what did Colorado Sen. Cory Gardner (R-Yuma) have to say? From CNN:

Sen. Cory Gardner, a Republican up for reelection in Colorado, didn’t directly answer the question.

“Peaceful protests are going to have to continue,” he said when asked if he was comfortable with what happened near the White House. [Pols emphasis]

Gardner ducked a similar question from Colorado Public Radio on Monday, claiming ignorance about President Trump’s directives to state governors to get tougher on protestors.

Governor Jared Polis, meanwhile, had no problems standing up against Trump.

► The Colorado legislature is halfway through the process of finalizing a new state budget with $3.3 billion in cuts. Today the House of Representatives voted — on a strict party-line vote — to approve an amended budget for discussion in the State Senate.

►  Colorado Democrats unveiled an extensive bill to deal with police accountability, as Jesse Paul writes for The Colorado Sun:

Democratic state lawmakers on Tuesday began to unveil a sweeping bill aimed at increasing law enforcement accountability in Colorado by collecting racial profiling data, ensuring officers hold each other accountable and making it easier for the public to file lawsuits against police.

The measure, which could be introduced as soon as Wednesday, also would beef up how law-enforcement involved deaths are investigated, prevent problematic officers from moving to different police departments and sheriff’s offices, and require agencies to use body cameras while giving them guidelines on how and when to release footage.

► Minnesota Attorney General Keith Ellison is expected to announce today a decision on additional charges for officers involved in the killing of George Floyd.

► A sixth day of protesting in Denver on Tuesday took a less-confrontational turn as large groups gathered for a peaceful protest.

► Infamous racist Republican Rep. Steve King is finally on his way out of Congress after losing a Primary battle on Tuesday. 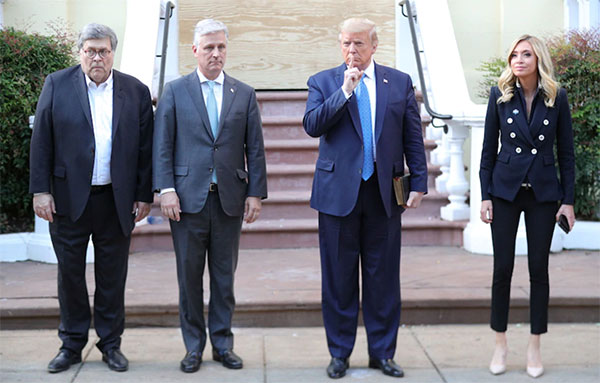 You know your Bible-touting photo op backfired when EVEN PAT ROBERTSON won’t defend you anymore. But Colorado Christian University’s Jeff Hunt will sure stick with you!

► Republicans — and the White House — are starting to freak out about losing control of the U.S. Senate. As POLITICO reports, Democrats are significantly outmaneuvering Republicans in Colorado:

The advertising disparity is starkest in Colorado, where Sen. Cory Gardner’s campaign launched its first ad recently and has so far spent more than $330,000 with a similar amount booked in the weeks ahead, according to Advertising Analytics. Democratic groups have spent more than $4 million on air in total this cycle, and no GOP outside groups have been on air yet. The NRSC and One Nation will be first to answer in early July, and Senate Leadership Fund, the super PAC affiliated with One Nation, has $5.5 million booked after Labor Day.

► Senator Cory Gardner (R-Yuma) is being called out for mischaracterizing comments made by former Gov. John Hickenlooper more than a decade ago:

► It’s tough to argue against the firing of this Denver police officer for making a really, really poor joke amid last week’s protests.

► President Trump says that Republicans need a new location for the 2020 Republican National Convention because the governor of North Carolina isn’t keen on ignoring safety precautions aimed at preventing another coronavirus outbreak.

► Governor Jared Polis is concerned about a surge of COVID-19 cases after days of protests involving large crowds of people.

► Legislation to allow state employees to collectively bargain on employment matters passed in the State Senate on Tuesday.

► As Colorado Public Radio reports, the state is getting help from Americorps in implementing an aggressive contact tracing strategy for COVID-19 cases.

► Former state lawmaker John Bermingham died at the age of 96.

► President Trump briefly descended into a bunker earlier this week amid protests outside the White House. But Trump has an explanation — he says he was doing an inspection.

► The Gallagher Amendment must die so that we all may live (with schools and firefighters).

► Vox.com offers up eight ideas for reforming police brutality and the targeting of black Americans. Here’s a list of reading materials suggested by black community leaders in Colorado.