A curfew will go into place on Saturday night in Denver at 8 p.m. in order to prevent more damage and violence downtown. The chaos has happened on two successive nights and been part of the protests of the George Floyd death at the hands of police in Minnesota.

“We had hoped that we would not have to take these steps. But the aggressive and dangerous actions taken by some individuals and groups under the cover of darkness has made it necessary,” Denver Mayor Michael Hancock said on Saturday afternoon…

The Colorado National Guard has been deployed by Gov. Jared Polis to help Denver police “maintain public safety and protect infrastructure and property in the downtown area,” according to Hancock. The city attorney says there could be up to a $999 fine or 300 days in jail for violation of curfew.

Rep. Leslie Herod of Denver says that all sanctioned protest activities will end tonight by 5:00PM. 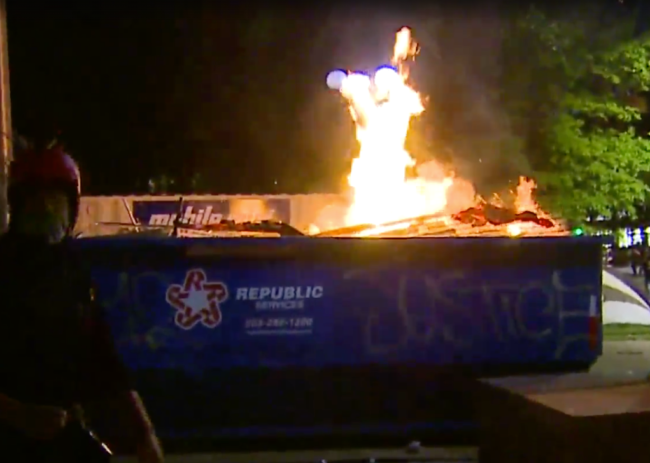 As Denver7 reports and readers are no doubt aware, yesterday marked another day of nationwide protests against police brutality in the wake of the death of George Floyd at the hands of Minneapolis police, one of whom is now in jail on murder charges. In Denver, the protests began peacefully with a noon march led by Denver school board member and activist Tay Anderson, and speeches later in the afternoon from Anderson, Rep. Leslie Herod of Denver, and a press conference from Mayor Michael Hancock expressed support–all of them urging that the ongoing protests remain peaceful after significant property damage around the state capitol building the previous night.

Unfortunately, despite these commendable efforts by Denver leaders to keep things peaceful, the destruction in downtown Denver this morning is sadly evident:

Clashes between police and protesters continued to escalate through the night, with tear gas creating a billowing cloud of white smoke in the area that could be seen from the air by AIRTRACKER7. Some protesters responded by setting things on fire, including a dumpster and a car, defacing Civic Center Park with graffiti and vandalizing the Colorado Supreme Court building as well as the Denver Public Library.

By midnight, Denver police confirmed the Target store on the 16th St. Mall had been looted by protesters who made off with a few items. No other details were immediately available.

“What we’re seeing is destructive, it’s needless, it’s senseless,” said Denver Mayor Michael Hancock in a Zoom interview with Denver7. “It’s unfortunate for everyone in Denver. … the demonstrations started peacefully… unfortunately as the night grew near, we had some folks show up who, quite frankly, meant to disrupt the peace. This is not who we are, and calmer heads must prevail. Our police officers have a sworn duty to maintain everyone’s safety – and they will. People are crying out to be heard, but this violent distraction only divides us.”

Tay Anderson lays the blame without hesitation on “white allies” who attacked Denver police despite the loud and clear exhortation from leaders present at his rally to remain nonviolent:

We asked white allies to go home and some of them still insisted throwing rocks, bottles, etc. at police.

The police responded with gas and rubber bullets. I am disgusted in how allies ignored our asks to go home and stay peaceful.

The context for last night’s second round of violence and property destruction in Denver are new reports coming out of the Twin Cities that a large percentage of the protesters being arrested there for looting and other crimes are not local residents—NBC News:

The mayor of St. Paul said that while that city was quieter Friday night than the previous night, he has been told that all of those arrested were from out of state.

State officials said that around 80 percent of those arrested in the Twin Cities on Friday had come from outside Minnesota.

While “there’s a group of folks that are sad and mourning” about Floyd, Mayor Melvin Carter said, “there seems to be another group that are using Mr. Floyd’s death as a cover to create havoc.”

Acknowledging reports that white supremacists and drug cartels [Pols emphasis] were taking advantage of the widespread chaos in Minneapolis and fueling some of the destruction throughout the region, he said his office was working closely with federal officials to identify any organized groups fueling the mayhem.

All circumstances aggregate to raise major questions about who might really be responsible for the violence–in Minnesota and here in Denver. Whether it’s anarchist white kids who don’t understand they are not helping or something more sinister like white supremacist agents provocateurs, what matters for the present is this violence is not condoned by community leaders. In this space, we are extremely reticent to subsidize conspiracy theories, and try to ensure a factual basis exists for any allegation we level or subsidize with our attention.

But if you’ve got a strong feeling that something’s not right about this, you’re not alone.