“This reads like a stream of consciousness tweetstorm that some poor staffer had to turn into the form of an Executive Order,” said Daphne Keller, a former Google attorney who now leads the Program on Platform Regulation at Stanford’s Cyber Policy Center.

The order nevertheless adds more ammunition to a talking point that resonates with Trump’s online base and will appease some Washington conservatives who are skeptical of the tech industry’s influence over political discourse. And Trump’s escalation of the issue could have a chilling effect on internet companies weighing whether to make rulings on misinformation or other content as Election Day nears.

UPDATE: Colorado Secretary of State Jena Griswold ain’t having it:

.@realDonaldTrump, you alleged fraud last time you ran. And you won. Then you tried very unsuccessfully to prove fraud. You failed at that. But you did motivate me to run for Secretary of State, and I’ll do everything to stop your voter suppression tactics. https://t.co/Blaahlf1Sm 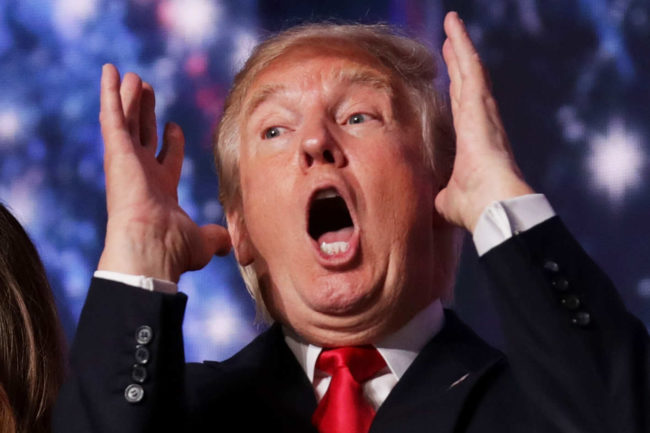 Politico reports as the fight to the death between President Donald Trump’s Twitterverse and reality escalates:

President Donald Trump is expected to sign an executive order aimed at social media companies Thursday, White House press secretary Kayleigh McEnany told reporters Wednesday evening, a move that comes as the president and his allies have escalated their allegations that companies like Twitter and Facebook stifle GOP voices…

Trump and his supporters have been hammering Twitter since the social network labeled a pair of his tweets with a fact-checking notice for the first time on Tuesday, and the president pledged Wednesday that “big action” will follow.

Twitter acted after Trump had alleged without evidence that mail-in ballots are likely to be “substantially fraudulent,” in tweets that the company said contained misleading information about the electoral process. The move triggered an array of rebukes from Republicans, including Trump.

As we discussed earlier this week, Trump’s latest crusade against mail ballot elections, which have been the law in Colorado since 2013 with trend-setting success in every metric including security, could undermine public confidence in the result if enough states switch to mail ballots as a way to safely conduct elections in the era of COVID-19. Especially with Trump’s impressionable and factually impervious base, this could set the stage for an ugly backlash in response to Trump losing the election, even by a wide enough margin to erase any doubt among reasonable people.

It’s not necessary in Colorado to debate whether Trump’s warnings about mail ballots are accurate, because we already know they’re not. With that established, there should be no reasonable objection to Twitter or any other social media outlet appending a fact check to the President’s (or anyone’s) direct communication through their platform to over 80 million people. There’s no “censorship” in providing supplemental information, and the overriding desire that everyone should share for having accurate information more than justifies a responsible party taking this action.

The low-information fight over mail ballots is just the latest case of an “alternative facts” reality fabricated for expediency by one side in American politics colliding with the peer-reviewed fact-checked world most of us try to live in. If your worldview is predicate on mistrust for government, public institutions, mass media, and every other foundational component of modern society, you’re much more likely to agree with Trump that no one should be able to even rationally analyze “free speech.”

We can only hope that this never comes close to a majority of American voters.

We’ll find out in November.