In an op-ed published behind the paywall yesterday by the Phil Anschutz-owned Colorado Springs Gazette, Republican House Minority Leader Patrick Neville sounds off in favor of immediately reopening the state’s economy–despite the fact that Gov. Jared Polis won praise last week from none other than President Donald Trump himself for the controversially swift pace of the state’s reopening:

We can slow — and ultimately our workforce will reverse — the financial crisis, but to do that, we have to speed up the reopening of Colorado. By all metrics, Colorado is on the back end of the pandemic. The areas that remain affected are dense urban populations such as Denver and Boulder. [Pols emphasis]

The first problem, as anyone familiar with the actual course of the pandemic in Colorado knows very well, is it’s categorically false to state that the areas which “remain affected” by the COVID-19 pandemic are “dense urban populations.” 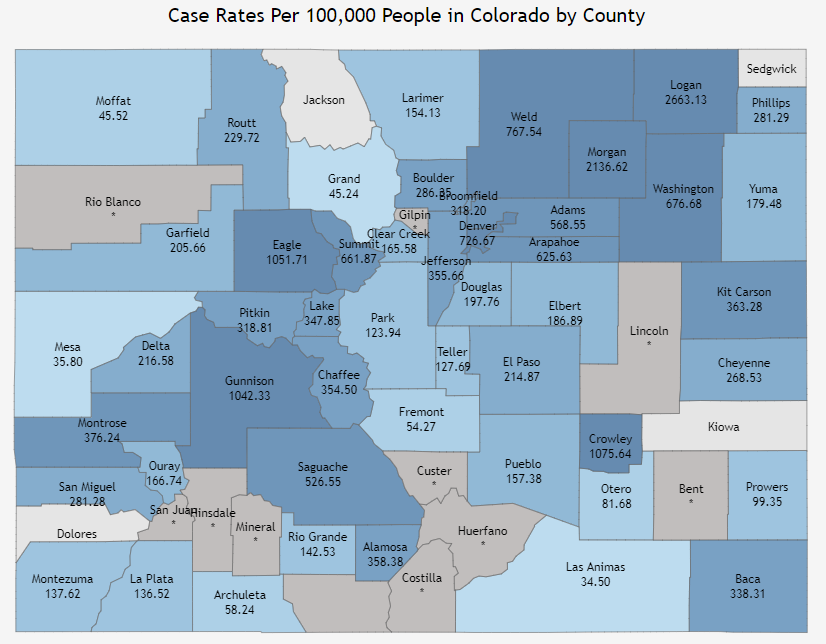 The top five counties by COVID-19 case rate are all in rural areas of the state: Logan, Morgan, Crowley, Eagle, Gunnison. The extremely high case rate in certain Eastern Plains counties in particular is attributable to two principal factors: nursing homes where the virus raged among elderly and disabled populations, and meatpacking plants staffed in unhealthily close quarters by people of color and immigrants.

And that brings us to the second problem with Neville’s argument, which goes beyond it simply being false. One of the more troubling realities of the COVID-19 pandemic has been the disease’s disproportionate impact on disadvantaged populations and people of color in particular. Employment by minority populations in industries that put them at greater risk, lack of economic alternatives to working in unsafe conditions, and other factors we still don’t understand have contributed to a much higher hospitalization and fatality rate for racial minorities–including in Colorado, where it’s fashionable to pretend that racism doesn’t happen so much.

The use of the word “urban” to signal we’re actually talking about people of color is of course one of the oldest “dog whistle politics” tropes in the book. Minority Leader Neville, proudly living in infamy after declaring that public health authorities and the state’s first Jewish governor have a “Gestapo” mentality, does not use these words by accident. It communicates a very clear and well-established meaning to his target audience, and the obligatory denials that follow are tinged with contempt.

Minority Leader Neville knows exactly what he’s saying, and he knows you know. Neville is no longer an aberration, he’s the poster child for the ugly place Republican politics in Colorado have descended to. There was a time, not so long ago, when racism well short of this example wasn’t tolerated by Colorado Republicans.

Now it comes from their leadership.