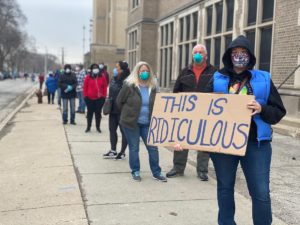 NBC News has a sad but very predictable update on the recent elections held in the state of Wisconsin, in which the Democratic governor attempting to delay voting until a vote-by-mail system could be put in place was overruled by the state’s conservative-dominated Supreme Court:

Officials have identified seven people who appear to have contracted the coronavirus through activities related to the April 7 election in Wisconsin, Milwaukee’s health commissioner said, and advocates worry it could be just the “tip of the iceberg.”

Commissioner Jeanette Kowalik said six of the cases involve Milwaukee voters and one is a Milwaukee poll worker, the Journal Sentinel reported…

Wisconsin proceeded with in-person voting only after a bitter partisan fight. The state’s Democratic governor tried to shift the election to vote-by-mail and postpone it, but was blocked by the conservative majority on the Wisconsin Supreme Court and the Republican-controlled legislature, prompting the chairman of the Wisconsin Democratic Party to warn that voters would die as a result.

Now, Wisconsin Democrats worry there may be more yet-to-be-reported cases since Milwaukee officials say they have only about 30 percent of the data in yet and officials in other parts of the state have yet to release information on Election Day-related infections.

Images of Wisconsin voters futilely attempting to practice social distancing while standing in line at polling places caused nationwide outrage, and called attention once again to the GOP’s very deliberate policy goal of obstructing the right to vote for urban and minority populations in particular. Even before the COVID-19 pandemic, the stark contrast between states which enforce rigid and often arbitrary laws requiring additional correspondence with officials to avoid being purged from the rolls and costly government issued IDs to register well in advance and states like Colorado, with accessible, secure mail ballots and same-day voter registration was emerging as a major new civil rights frontier. The net result is severely unequal access to the vote across different states.

Now, unfortunately, we may soon be talking about a cost in lives. But even under a tragic headline, there’s some hope for Wisconsin in this story–delivered by none other than Colorado Division of Elections Director Judd Choate:

Judd Choate, the director of elections in Colorado, one of five states that vote entirely by mail, said he actually saw a silver lining in Wisconsin’s ability to dramatically scale up absentee mail balloting…

“They went from almost no vote-by-mail to over half vote-by-mail in a couple of weeks,” Choate told reporters on a call organized by the National Vote at Home Institute. “Yes, there were lines, yes there were these odd circumstances of people wearing masks and standing a great distance apart from each other. But that’s the in-person part. The vote-by-mail part actually went pretty well.”

For the voters who were able to take advantage of absentee ballots in Wisconsin, that’s a win. But the sum of Wisconsin’s experience, from the partisan political battle preceding lines on Election Day to the cases of pandemic disease that appear to have directly resulted, could not be a more powerful argument for every state to adopt Colorado’s model of all-mail ballots without delay.