At Least It’s Not Your Election, Badger State Edition

Milwaukee resident Jennifer Taff requested an absentee ballot almost three weeks ago, never got it. She has a father dying from lung disease and then waited hours in line to vote at Washington High School. Photo from Patricia McKnight. 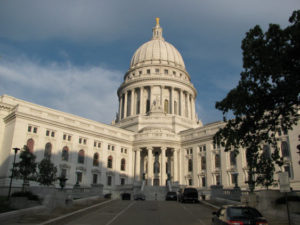 As the Milwaukee Journal-Sentinel reports:

Wisconsin voters will head to the polls Tuesday after Gov. Tony Evers failed to shut down Tuesday’s election in a historic last-minute move that was swiftly rejected by the conservative majority of the Wisconsin Supreme Court.

The spring election will take place with polls opening at 7 a.m. statewide in the face of a warning from the state’s top health official who said voting in person will “without question” lead to more illness and death as coronavirus spreads through the state.

Six chaotic hours on Monday during which state leaders fought in court over whether to hold the election ended with a U.S. Supreme Court decision requiring all absentee ballots to be postmarked by Tuesday, reversing a federal judge’s order to extend absentee voting by a week and forcing thousands who hadn’t yet received their ballots to vote in person or not at all…

Here in Colorado, where laws designed to make voting easy include mail ballots sent to all active voters and same-day registration, the electoral train wreck unfolding in Wisconsin today looks like a tragedy so preventable it must be by design. Absentee ballots were reportedly requested by Wisconsin voters in record numbers, but results in Colorado prove there’s just no comparison to a true mail ballot system for facilitating access to the franchise–and this year, safe access. To force voters to the polls without regard for public safety instead of simply postponing of Wisconsin’s old-school election is an insidious form of vote suppression that simply wouldn’t be possible in our state.

It’s common knowledge that Republicans want fewer people to vote, but this is an ugly way to show it.