Get More Smarter on Monday (April 20)

► Remember earlier this month when President Trump fired the inspector general who was supposed to oversee the distribution of coronavirus stimulus funds? It turns out that this was not a good idea!

As The Washington Post reports, the small business loan program ran out of money because a giant chunk of it went to not small businesses:

The federal government gave national hotel and restaurant chains millions of dollars in grants before the $349 billion program ran out of money Thursday, leading to a backlash that prompted one company to give the money back and a Republican senator to say that “millions of dollars are being wasted.”

Thousands of traditional small businesses were unable to get funding from the program before it ran dry. As Congress and the White House near a deal to add an additional $310 billion to the program, some are calling for additional oversight and rule changes to prevent bigger chains from accepting any more money…

…In all, more than 70 publicly traded companies have reported receiving money from the program, according to filings with the Securities and Exchange Commission.

Executives at Shake Shack, a $1.6 billion company, returned a $10 million dollar loan it had received after criticism from small business owners.

Meanwhile, the Trump administration and Congress are hammering out details on another coronavirus stimulus bill that could inject another $470 billion into the small business loan fund. Congressman Jason Crow (D-Aurora) is pushing locally for more money to go into the Payment Protection Program.

► President Trump held another off-the-wall press briefing over the weekend that included defamatory comments toward the FBI and an open admission that he snubbed Utah Sen. Mitt Romney for a new committee purely out of spite. Then this happened:

WATCH: Reporter: You knew #coronavirus was spreading like wildfire in Feb. You held rallies.

Trump: Keep your voice down.

Trump is ABSOLUTELY out of control. WILL NOT ANSWER, just bullies.pic.twitter.com/dGizBIyhEI

► The actual President of the United States of America is literally cheerleading for anti-government protestors. As Maggie Haberman writes for The New York Times:

Whether his latest theme will be effective for him is an open question: In an NBC/Wall Street Journal poll released on Sunday, just 36 percent of voters said they generally trusted what Mr. Trump says about the coronavirus.

But the president, who ran as an insurgent in 2016, is most comfortable raging against the machine of government, even when he is the one running the country. And while the coronavirus is in every state in the union, it is heavily affecting minority and low-income communities.

So when Mr. Trump on Friday tweeted “LIBERATE,” his all-capitalized exhortations against strict orders in specific states — including Michigan — were in keeping with how he ran in 2016: saying things that seem contradictory, like pledging to work with governors and then urging people to “liberate” their states, and leaving it to his audiences to hear what they want to hear in his words.

Right wing protestors mad about stay-at-home orders yelled at the State Capitol on Sunday. The most enduring image from Sunday was a few unidentified nurses who took a break from working at a nearby hospital to make their own statement:

Remarkable scene at 12th and Grant, where two healthcare workers from a Denver-area hospital — they declined to say which or give their names — are standing in the crosswalk during red lights as a “reminder,” they say, of why shutdown measures are in place. pic.twitter.com/7xTjXvGN2E

Maybe half of those at Sunday’s protest wore masks. Few practiced social distancing.

As a reminder, nearly 8 in 10 Americans DO NOT AGREE with the narrative being pushed by these protestors.

► As Will Bunch writes for The Philadelphia Inquirer, these anti-government protests look and smell a lot like the 2009 Tea Party — which was not the grassroots organization that it claimed to be:

I’d be something of a hypocrite to criticize the fact that people are writing about or broadcasting these protests because a) I’m here this morning writing about them and b) a decade ago I was so fascinated by a right-wing protest movement with similar, sometimes irrational demands and similar nebulous origins — the Tea Party —that I wrote an entire book about it, The Backlash. But what I learned back then is why I’m troubled by the way the Times, cable TV and other outlets are covering 2020′s “spontaneous”-not-really-right-wing rallies, because the real story is who stands behind them, and why.

► Colorado Sen. Cory Gardner (R-Yuma) is the subject of an ethics complaint related to a $1,000-a-bottle champagne tasting party he attended in late February in Palm Beach, Florida. The pictures from the event are not a good look for Gardner.

► Vice President Mike Pence was in Colorado Springs on Saturday to give the commencement address to Air Force Academy graduates. Governor Jared Polis met Pence on the tarmac at the airport and appeared to have some questions for the guy in charge of the federal coronavirus response: 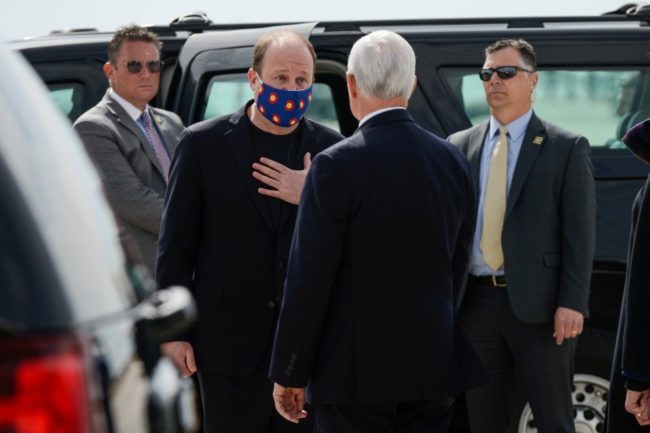 ► As Charles Ashby reports for The Grand Junction Daily Sentinel, Republican elected officials in Western Colorado are confusing the hell out of each other — and everyone else — as they spread unconfirmed truths and rumors about relief funding related to the coronavirus outbreak:

“You should also know that the Treasure (sic) stopped the 500 million going to CDOT as of yesterday,” Scott wrote on Friday. “That will impact not only state projects but local agency projects. Brace for impact……”

Thing is, that also is not true. [Pols emphasis]

Young’s office said that the bonds, which were part of a transportation funding bill approved by the Colorado Legislature two years ago, initially were to be issued back in October, but he held off because CDOT hadn’t yet spent the first $500 million that were issued in 2018.

► Governor Jared Polis announced new requirements for “essential” workers to wear face masks at all times. From The Denver Post:

Colorado will tighten oversight on nursing homes and senior living facilities to combat rising coronavirus outbreaks among the state’s most vulnerable population, while essential workers such as grocery store clerks and employees at meatpacking plants will now be required to wear masks.

Gov. Jared Polis announced the new executive order at a news conference Friday, putting some regulatory weight and additional resources — including the National Guard — behind a deepening crisis in facilities across the state.

► John Aguilar of The Denver Post looks at how neighboring states that have not implemented stay-at-home orders are faring:

At first glance, it would appear that Colorado and its neighbors are largely taking similar steps to combating the coronavirus — ordering the closure of schools, restaurants and venues where people congregate — and that the lack of an official stay-at-home order is a distinction without a difference.

But Colorado’s decision to take the extra step could prove valuable in keeping its ultimate case numbers down, said Dr. John Douglas, executive director of the Tri-County Health Department, which oversees Adams, Arapahoe and Douglas counties.

“Given the models in terms of what we could see with a surge (of COVID-19 patients), we knew we had to get ahead of this,” said Douglas, whose agency issued its own stay-at-home order shortly before Polis issued one statewide. “We felt the smartest thing to do was to have the most complete social distancing we could achieve.”

► RTD has been forced to make significant reductions in public transportation services because of the coronavirus outbreak. As of Sunday, your lightrail and bus options are getting pretty thin.

► As CBS4 Denver reports, a new state program has been launched to help track and prevent outbreaks of COVID-19:

…residents who voluntarily take the survey could help the state better understand the progression of the virus, and potentially get ahead of it.

► City officials in Denver are concerned that social distancing measures could have to remain in place for another 2-4 months.

Due to the coronavirus pandemic, Democrats did not meet as scheduled, but instead cast their vote electronically and telephonically for one of three Democratic Senate candidates: Romanoff, Stephany Rose Spaulding, and Erik Underwood.

Romanoff won 86% of the 2,860 delegate votes, Spaulding took 9% and Underwood grabbed less than 1%. More than 4 percent of delegates abstained from voting. Candidates needed 30% of the total to qualify for the June 30 ballot.

Romanoff talked up his victory as a dominating win; unfortunately for his campaign, it’s hard to get much political mileage out of a virtual assembly when there are no photos or videos to document the day.

► Democratic Senate candidate Lorena Garcia was informed that she did not collect the required number of valid signatures necessary to make the U.S. Senate Primary ballot.

► House Minority Leader Patrick Neville made sure to attend “be mad at the government or something” rally.

Irresponsible and dangerous, is this what Republican leadership looks like in Colorado? #copolitics #coronavirus #Covid19Colorado #COVID19 #Coleg pic.twitter.com/5gKbWrI5Xz

► Ft. Collins-area lawmakers will host a virtual town hall on Saturday, as The Coloradoan reports.

► The Bureau of Land Management (BLM) wants to open up new public lands in Colorado for oil and gas drilling, which makes absolutely no sense given that drilling companies in Colorado aren’t even using the leases they already have because the oil market tanked.

►  As POLITICO reports, the Government Accountability Office is stepping in to conduct oversight of stimulus spending since President Trump won’t let an inspector general do the job.

► The mayor of Idaho Springs, Colorado was arrested on charges of domestic violence.

► President Trump is again hinting that he may pardon the likes of Paul Manafort, Michael Flynn, and Roger Stone.

► President Trump is trying to pin blame for coronavirus on the World Health Organization (WHO), despite the fact that officials at WHO were providing real-time information and warnings to the United States.

► President Trump’s apparent choice to become a new inspector general in the Pentagon has no experience running a large organization and no military experience whatsoever. Other than that, he sounds great.

► Erik Maulbetsch of The Colorado Times Recorder goes into great detail in examining how Republican operatives manufactured a “scandal” that they have used as the basis of expensive and misleading advertisements targeting former Gov. John Hickenlooper.

► The latest episode of The Get More Smarter Podcast went live on Saturday morning. Tune in to hear hosts Jason Bane and Ian Silverii discuss the latest fundraising numbers and listen to some wacky interviews with anti-stay-at-home protestors.