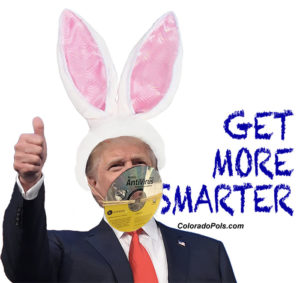 Have a nice “Good Friday” and a Happy Easter. If we work together, maybe we can convince President Trump to pardon a turkey on Sunday. Now, let’s Get More Smarter. If you think we missed something important, please include the link in the comments below (here’s a good example). If you are more of an audio/visual learner, check out The Get More Smarter Show or The Get More Smarter Podcast. And don’t forget to find us on Facebook and Twitter.

► President Trump cherishes few things more than the opportunity to stand at a podium and see if he can construct new sentences out of mismatched words. But as The New York Times reports, an increasing number of Republican advisers are worried that Trump’s daily coronavirus briefings are doing far more harm than good — and not just for the country:

As unemployment soars and the death toll skyrockets, and new polls show support for the president’s handling of the crisis sagging, White House allies and Republican lawmakers increasingly believe the briefings are hurting the president more than helping him. Many view the sessions as a kind of original sin from which all of his missteps flow, once he gets through his prepared script and turns to his preferred style of extemporaneous bluster and invective.

Mr. Trump “sometimes drowns out his own message,” said Senator Lindsey Graham of South Carolina, who has become one of the president’s informal counselors and told him “a once-a-week show” could be more effective. Representative Susan Brooks of Indiana said “they’re going on too long.” Senator Shelley Moore Capito of West Virginia said the briefings were “going off the rails a little bit” and suggested that he should “let the health professionals guide where we’re going to go.”…

…One of Mr. Trump’s top political advisers, speaking on the condition of anonymity so as not to anger the president, was even blunter, arguing that the White House was handing Mr. Biden ammunition each night by sending the president out to the cameras. [Pols emphasis]

Anybody who has watched even a snippet of one of Trump’s coronavirus briefings can understand these sentiments. Of course, Trump wouldn’t give up the opportunity to air his grievances on national television if the microphone was made entirely of coronavirus particles.

► As The Denver Post reports, Colorado officials are urging residents and small businesses to act swiftly in order to collect federal stimulus money. Meanwhile, the Colorado Springs Independent points out that the federal government is bailing out on coronavirus testing in local areas:

UCHealth, which established the site in a tent off South Parkside Drive, said Thursday it hopes to continue operating the site without FEMA support.

► Vox.com weighs in on the “ventilator patronage” story that broke in Colorado this week.

► As The Washington Post reports, city and state governments are bracing for serious economic trouble:

The economic carnage unleashed by the novel coronavirus nationwide hasn’t just shuttered businesses and left more than 17 million Americans seeking unemployment benefits — it has also threatened city and state governments with financial devastation, according to local leaders, who say their ability to maintain roads, schools and basic social services is at risk at a time when their residents need help most.

Many states and cities, which were already cash-strapped, are now in dire straits, facing plunging tax revenue and spiking costs.

“I do think cities across the country are looking at some degree of austerity,” said San Antonio Mayor Ron Nirenberg (I), who predicts his municipality will face as much as a $100 million shortfall. “This is a reckoning for us.”

Colorado lawmakers are worried that the state budget could take a hit of some $3 billion.

► The Republican group “The Lincoln Project” is out with a new ad bashing President Trump for his slow response to the coronavirus outbreak:

► Salon.com reports on a story that has been growing bigger in recent days:

Two House committees have called on the Federal Emergency Management Agency (FEMA) to turn over documents related to reports that the agency is seizing orders of coronavirus medical supplies from states, as well as the involvement of President Donald Trump’s son-in-law, Jared Kushner, in overseeing those efforts.

…The committees also requested a response to media reports that that agency was “redirecting” medical supplies ordered by states and hospitals. Officials in at least a half-dozen states have reported that FEMA hijacked supplies sent to states without informing them.

Colorado is one of those states.

► British Prime Minister Boris Johnson is out of intensive care and is recovering from a coronavirus infection.

► As Chris Cillizza writes for CNN, be very, very, very glad that Florida Republican Gov. Ron DeSantis is not your governor:

…DeSantis appears to not know that the reason that schools are closed during the coronavirus pandemic is not because the virus is killing kids in big numbers but rather that children are demonstrated carriers and vectors of the illness to adults. A kid might get coronavirus and have mild (or no) symptoms at all. But they could pass it to a teacher, a parent or another adult who gets much, much sicker. And that adult could then pass coronavirus to more people. And on and on we go.

…When a fearful and anxious public turns to its government for guidance and leadership, there’s nowhere for people like the governor of a state to hide from the massive responsibility. You either step up to meet the moments — Govs. Mike DeWine (R-Ohio) and Andy Beshear (D-Kentucky) to name two — or you shrink in the face of them. DeSantis is a glaring example of the latter.

► Governor Jared Polis says that targeted coronavirus testing — not mass testing — is the best way forward in dealing with the virus outbreak.

► In another indicator of President Trump’s rapidly-diminishing credibility, Politico reports on how mayors around the country are looking to each other for help on the coronavirus outbreak.

► Congressman Ken Buck (R-Greeley), who moonlights as the Chairman of the Colorado Republican Party (or vice versa) is now singing a completely different tune on the dangers of coronavirus.

► Colorado Sen. Cory Gardner (R-Yuma) will face a challenge at the State Republican Convention…sort of. According to “The Unaffiliated” newsletter via The Colorado Sun:

Margot Dupre, a Colorado Springs real estate agent, submitted a request to be included on the ballot, which will get sent to GOP assembly delegates Saturday, a party spokesman confirmed to The Sun…

…Dupre’s candidacy — first reported in The Unaffiliated in January — is the equivalent of being nominated from the floor at the state party assembly, which is usually a longshot prospect. But with the assembly vote taking place remotely, the political newcomer had to announce her intentions sooner.

Dupre has virtually no chance of getting the 30% of the vote needed to make it onto the June Primary ballot, but strange things happen at State GOP Conventions (just ask Darryl Glenn). Dupre has been an official candidates since January but failed to gather the necessary number of petition signatures required for ballot access.

► Vox.com takes a shot at examining the demise of the Bernie Sanders for President campaign.

► The Trump administration is acting swiftly to dismantle as many environmental regulations as possible.

► The editorial board of The Washington Post decries anti-abortion politicians who are trying to take advantage of the coronavirus outbreak to advance their agendas.

► Once again, The Onion for the win.

► According to new polling data, watching Fox News on a regular basis is absolutely dangerous to your health.

► Hotels across the country are opening up rooms for first responders and coronavirus patients…but not the ones with “Trump” in the name.

► United States intelligence agencies knew about the spreading coronavirus as far back as late November, as ABC News reports.

► How do you run a U.S. Senate campaign during a coronavirus lockdown? What’s it like to be in charge during a time of crisis? How will you get your hair cut? We ask former Gov. John Hickenlooper these questions and more in the latest episode of The Get More Smarter Podcast.