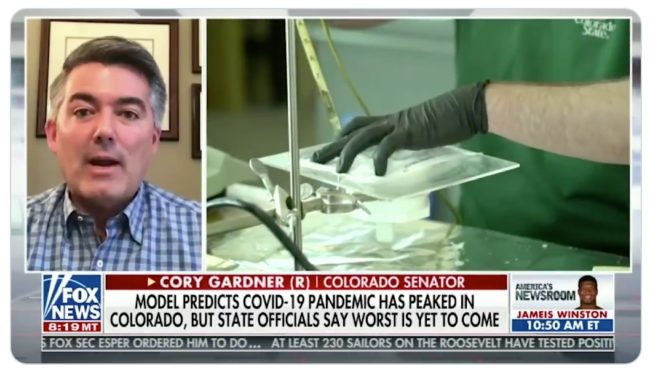 Yesterday, Sen. Cory Gardner of Colorado in concert with America’s Twitterer-in-chief rolled out a multimedia PR package “celebrating” the delivery due to a personal request from Gardner to Donald Trump of 100 new ventilator machines to our state from the Strategic National Stockpile. This rollout included a Tweet to the President’s tens of millions of followers, supporting cover from local Republican mouthpieces, and even an appearance on Fox News by Gardner to take credit for Trump’s “largesse.”

But by the end of the day, this rosy picture was very far from the prevalent narrative of the day’s events, and Sen. Gardner found himself facing one of the worst public relations debacles of his career–once again created for him by the President Gardner is most famous for servilely defending ever since Trump’s improbable 2016 election. Because the 100 ventilators Gardner and Trump were so excited to announce to Colorado constituted just 20% of the number federal officials had bought out from under Colorado a few days earlier.

Sen. Gardner made no acknowledgement of the co-opting of 500 ventilators sought by the state of Colorado just days before Trump did Gardner the “personal favor” of sending us 100 ventilators during his Fox News appearance yesterday, or in a telephone town hall the day before when he was specifically questioned about the situation. Gardner’s crass “celebration” of what amounts to an adverse development in Colorado’s fright against the COVID-19 pandemic, with no acknowledgement of the facts that completely change the nature of the story…

Starting with the Denver Post’s editorial board today, it’s clear this did not work out.

President Donald Trump is treating life-saving medical equipment as emoluments he can dole out as favors to loyalists. It’s the worst imaginable form of corruption — playing political games with lives. For the good of this nation during what should be a time of unity, he must stop…

Trump had only days before prevented Colorado Gov. Jared Polis from securing 500 ventilators from a private company, instead, taking the ventilators for the federal government. Polis sent a formal letter pleading for medical equipment, but the president took the time to make clear he was responding to a request from Gardner. We are left to believe that if Colorado didn’t have a Republican senator in office, our state would not be getting these 100 ventilators. How many ventilators would we be getting if we had a Republican governor and a second Republican senator? [Pols emphasis] Would that indicate we had more Republican lives in our state worth saving for Trump and resources would start flowing? Should Utah be concerned that Sen. Mitt Romney voted to remove the president from office?

This behavior comes, of course, weeks after Trump informed states they would have to compete against one another in the procurement of medical supplies at a time of global shortages due to the coronavirus pandemic.

Even Colorado’s senior Sen. Michael Bennet who has been very reticent out of a sense of same-state collegiality to directly criticize Gardner’s endless fealty to Trump, couldn’t defend this one:

The fact that FEMA and HHS got in the middle of what should have been a simple transaction demonstrates this administration’s lack of strategy and proper coordination during this crisis.

Rep. Diana DeGette of Denver was quite a bit more direct, as CBS4 Denver reports:

“I think this thing that happened with Sen. Gardner and President Trump is very disturbing,” DeGette told CNN Wednesday evening. “What is the process here?”

DeGette said that while she wants the state to get every ventilator it can — after initially requesting 10,000 — the process employed by the White House shows that the president appears to be doling out the ventilators to his allies at a time when the virus is affecting people of all political persuasions.

“It seems that way to me,” DeGette said when asked if it appeared to be a political favor to Gardner. “I was totally outraged.” [Pols emphasis]

In hindsight, Gardner’s attempt to deceive not just Coloradans but the much larger conservative audience at Fox News into thinking that Trump somehow did Colorado a favor, when in fact much more harm than good was done in the full context, backfired spectacularly–with more coverage given to the original co-opting of 500 ventilators than the limited coverage that story received when it happened. Reporters were obliged to give the proper context that Trump and Gardner omitted, and it completely changed the story. Trump became the villain, not Colorado’s savior, and Gardner became a willing agent in a brazen deception of the people of his own state.

Every Colorado voter who understands this is going to be horrified. It is going to change votes.

And it was completely avoidable. Gardner didn’t have to do this. He thought it would work.