UPDATE #2: In a clip sure to outrage anyone who knows the full context of the story, Sen. Cory Gardner went on Fox News this morning to celebrate the 100 ventilators he snagged as a personal favor from President Donald Trump–presumably out of the 500 the Trump administration bought out from under Colorado:

ICYMI ➡️I joined @AmericasNewsroom this morning to discuss the 100 ventilators Colorado will soon receive to combat #COVID19 and the steps we’re taking to help small businesses through this pandemic. pic.twitter.com/0pa6x9eEh0

The closest Gardner comes to acknowledging the original sin of Trump’s swiping of 500 ventilators is to mention at about 1:30 that “The governor has been searching for ventilators. FEMA has been searching for ventilators.” Not a single word about how those two searches intersected, and Colorado lost. Without that part of the story, understanding that Colorado is getting back 20% of the ventilators they lost due to the federal government’s actions, this narrative is misleading in the extreme.

A textbook lie of omission, told on national television.

Colorado’s Governor says FEMA blocked the state’s purchase of 500 ventilators. Now 100 are sent here as a favor to a political ally of the President. Colorado will take ventilators however we can get them but the obviousness of this would be laughable if people weren’t dying. https://t.co/hwdgZGUe1s 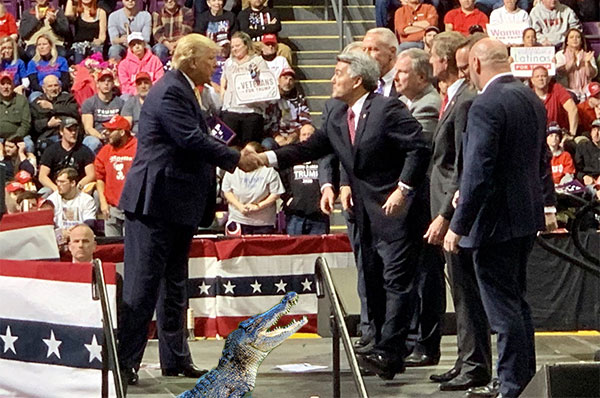 The Denver Post reported over the weekend on an order of 500 ventilators sought by the state of Colorado to forestall a shortage of the devices in our state–an order that was co-opted by the Federal Emergency Management Agency (FEMA) for federal use “out from under” Colorado, after President Donald Trump told states they should try to acquire medical equipment to respond to COVID-19 ourselves:

Colorado was making a deal with a manufacturer for an order of much-needed ventilators when the Federal Emergency Management Agency swooped in and took it themselves, Gov. Jared Polis told CNN on Friday night.

It was one thing for states to be competing among themselves for vital resources to fight the novel coronavirus, Polis said. Now they’re competing against the federal government, too.

Yesterday, Sen. Cory Gardner was asked during a telephone town hall about the federal government’s swiping of 500 Colorado-bound ventilators:

On a telephone town hall, @SenCoryGardner is asked about Gov. Jared Polis’ claim that FEMA snatched 500 ventilators set aside for Colorado.

He doesn’t address the claim. He says he’s talked to Polis, Trump and Pence about getting FEMA ventilators to Colorado. #cosen #copolitics

But today, as The Hill’s Justine Coleman reports:

President Trump on Wednesday announced that 100 ventilators will “immediately” be sent to Colorado after Sen. Cory Gardner (R-Colo.) made a request for the medical equipment.

In a response to Gardner’s tweet announcing the approval of National Guard assistance in the state, Trump posted, “Will be immediately sending 100 Ventilators to Colorado at the request of Senator Gardner!”

…The Colorado governor’s press secretary, Conor Cahill, said Tuesday that Polis had been notified Colorado’s orders for ventilators will not be granted in the coming weeks.

In a letter to Vice President Mike Pence last week, Gov. Jared Polis in fact requested a total of 10,000 ventilators, along with “associated equipment and pharmaceuticals” for their operation. That letter was sent several days before Gov. Polis went on CNN to expose that the federal government had bought an order of 500 machines out from under the state of Colorado.

But today, we’re supposed to celebrate the fact that the federal government will “generously” give us 1% of the ventilators we originally asked for, and one-fifth of what they bought out from under the state just last week? It’s preposterous, but that’s apparently what Gardner expects us to do. And given Trump’s well-publicized exercise of personal spite in the distribution of emergency equipment during the COVID-19 pandemic, if Gov. Polis complains about what amounts to an outrageous shell game being played with lifesaving medical equipment, we might not even get the 100 ventilators.

Folks, to say this is nothing to celebrate is an understatement.

Colorado just got historically ripped off–and Cory Gardner is telling us to like it.