Joe Biden Back From Oblivion? 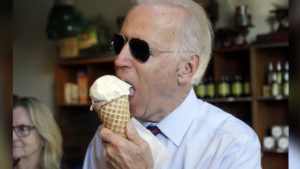 The results of yesterday’s Democratic presidential primary in South Carolina have, if fans of former Vice President Joe Biden are to be believed, mashed the reset button on the tumultuous 2020 elections just as conventional wisdom was settling into the presumption that Sen. Bernie Sanders was an unstoppable force. But as Politico reports, the depth and breadth of Biden’s victory is perhaps more remarkable than the win itself, which was expected:

The scale of Biden’s victory in South Carolina was enormous. He went into the contest trailing Bernie Sanders in both total votes cast and delegates. He will leave South Carolina, where turnout exceeded Iowa and New Hampshire combined, with a lead in the popular vote and, according to estimates late Saturday night, about a half-dozen delegates behind Sanders.

The victory was powered by an electorate that was more moderate than the first three states. Half of South Carolina voters identified as moderate (41 percent) or conservative (9 percent) and half as somewhat liberal (30 percent) or very liberal (19 percent). But Biden won every group. The victory revealed an important demographic and ideological divide in the Democratic Party: black voters, especially in the South, are a moderating force in the national party. Biden said nobody should count him out until South Carolina’s more diverse electorate had its say, and he was right.

With Super Tuesday 48 hours away and a large percentage of eligible primary voters in Colorado still in possession of their ballots, Biden’s big win in South Carolina could be the result fence-sitters have been waiting for. The non-Sanders vote in Colorado constitutes around 70% of the Democratic primary electorate based on polling, but the opposition to Sanders is fragmented between far too many candidates to have a chance.

We’ll definitely see a stronger result for Biden on Super Tuesday now than we would have before this victory. In Colorado we’ll be looking to see that effect as well, despite the fact that Biden has basically ignored the state so far–and by cracking Sanders’ invincibility in a big way in South Carolina, Biden could open the door to more votes for the current second-place contender in Colorado polling, Sen. Elizabeth Warren.

Much like Colorado weather, this one’s going to be difficult to predict. But it’s not over by a long shot.