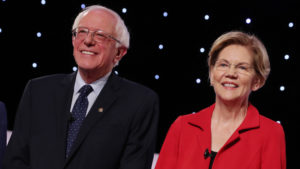 There’s been an unusual shortage of polling of the Democratic presidential primary race in Colorado with Super Tuesday now just a week away–so a new poll from Dem pollster Data For Progress is getting a rush of interest this afternoon:

Sanders continues to perform extremely strongly with voters under 45, with a majority of these younger voters in each state supporting him. His vote lead is substantially larger in both states among voters with their minds made up and voters who are extremely enthusiastic about their vote choice.

Here are the crosstabs for DfP’s Colorado poll. We don’t have a lot of experience with Data For Progress, but they correctly forecast a bigger-than-expected win for Sen. Bernie Sanders in the recent Nevada caucus. These numbers are generally in line with the trends in the race we’ve observed, and fans of Sen. Elizabeth Warren in particular will gain fresh hope from her pulling into second place. Warren has targeted Colorado as key to her Super Tuesday comeback play, and it looks like that effort has borne fruit.

With that said, if the 66% of Colorado voters who support someone other than Bernie Sanders don’t consolidate behind a single alternative, he’s the comfortable favorite to win the state.