Get More Smarter on Thursday (February 27)

Happy “National Protein Day.” Go eat a burger, or something. It’s time to Get More Smarter. If you think we missed something important, please include the link in the comments below (here’s a good example). If you are more of an audio/visual learner, check out The Get More Smarter Show or The Get More Smarter Podcast. And don’t forget to find us on Facebook and Twitter.

► As the United States braces for what appears to be an inevitable Coronavirus outbreak, more attention is (rightfully) being paid to Trump administration decisions that have left the country more vulnerable to a pandemic. From The Washington Post:

President Trump insists the United States is “very, very ready” for dealing with the coronavirus. Yet two years ago, his administration undercut its own ability to respond to such an outbreak.

Trump announced in a news conference last night that Vice President Pence will lead the federal government’s response to the deadly coronavirus, trying to reassure Americans amid growing concerns of a global health crisis that has led to tumbling stocks as the virus spreads around the world…

…Trump didn’t mention that there’s evidence the virus could now be spreading within the United States. A person in Northern California has contracted the coronavirus without traveling to regions hit by the outbreak or coming in contact with anyone known to have the infection, the Centers for Disease Control and Prevention reported last night…

…And he didn’t point to the history that is making his administration’s response to this new outbreak more difficult. Two years ago, the administration disbanded two permanent groups formed by President Obama to respond to the 2014 Ebola outbreak — one within the White House National Security Council and another within the Department of Homeland Security.

That sounds bad, right? But it’s just the beginning…

That’s not all Trump did. He also proposed cutting the parts of the budgets at NSC, DHS, and Health and Human Services designated for fighting global disease. And in early 2018, the Centers for Disease Control and Prevention dramatically downsized its epidemic prevention activities in 39 out of 49 countries because money was running out.

We should also mention that putting Vice President Mike Pence in charge of Coronavirus response is a dicey choice considering Pence’s history with such efforts; Pence was Governor of Indiana during the worst outbreak of HIV in state history, and he regularly overruled suggestions by health officials on how to handle the problem.

If you are concerned about how to prepare for Coronavirus coming to Colorado, experts say to plan like you might for a big snowstorm. 9News.com has more on separating fact from fiction.

► Colorado lawmakers gave final approval to legislation that will repeal the death penalty in Colorado. As The Denver Post explains:

After nearly five hours of debate Wednesday, the state House voted 38-27 for the repeal, with three Democrats joining all 24 House Republicans in voting against the bill.

In total, lawmakers spent about 36 hours debating and taking testimony on the bill since late January, when the bill moved through the Senate.

The bill now heads to the desk of Gov. Jared Polis, who will have 10 days to sign it or allow it to become law without any action.

Meanwhile, Colorado Public Radio reports that more candidates are spending money in Colorado ahead of Super Tuesday…but nobody is dropping more coin than Michael Bloomberg. Of course, nobody seems to be dropping in polls more than Bloomberg, either.

► If you still have a mail ballot ahead of Super Tuesday, DO NOT DROP IT IN THE MAIL. In order to make sure that your vote is counted, take your ballot to a drop-off location in your area; go to GoVoteColorado.com for more information. You might also check out this Super Tuesday Q&A from Colorado Public Radio.

► Former Colorado Gov. John Hickenlooper picked up another big endorsement as he seeks the Democratic nomination for U.S. Senate. From The Aurora Sentinel:

Gun-control advocate and former Arizona Congresswoman Gabby Giffords is again planning an endorsement trip to Aurora. This time it will be for John Hickenlooper in the U.S. Senate race.

“A lot has changed in the last severn years. Gun safety legislation went from a political third rail to a winning issue,” said Peter Ambler, executive director of Giffords, the group the former congresswoman founded with her husband to endorse and support candidates, policy and legislation.”…

…During his tenure as Colorado governor, Hickenlooper saw firsthand the outcomes of gun violence, at funerals for Aurora theater shooting victims, Tom Clements, head of the Colorado Department of Corrections, and Claire Davis, who was killed at Arapahoe High School.

► State Sen. Larry Crowder apparently believes that efforts to change the name of “Columbus Day” are somehow applicable to the Ku Klux Klan. Also, he uses the term “Orientals” in a Facebook rant. Good times.

► The Department of the Interior has lifted a moratorium on federal coal leasing. This still won’t change the fact that the coal industry really isn’t financially viable anymore.

► Data from The Center for Western Priorities shows that the top three energy producing states in the Western U.S. are averaging 8 spills PER DAY:

A new analysis by the Center for Western Priorities finds that oil and gas companies reported 2,811 spills in Colorado, Wyoming, and New Mexico in 2019, nearly eight per day. Across the three states, drillers reported spilling 23,600 barrels of oil and 170,223 barrels of produced water — salty wastewater often laced with toxic chemicals.

The number of reported spills has increased steadily in Wyoming and Colorado over the past few years, rising 31 percent in Wyoming since 2015, and 58 percent in Colorado since 2012. Companies in New Mexico reported 1,352 spills, by far the most of the three states. While this represents an 11 percent decrease from the year prior, companies reported releasing 812 million cubic feet of methane — more than three times the amount reported the year before. 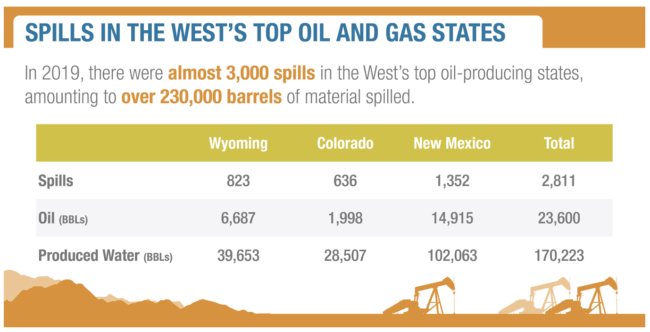 Via Center for Western Priorities

► The Trump campaign is airing a new commercial with footage from last week’s rally in Colorado Springs.

► Oh, look: Former Colorado lawmaker Ted Harvey is behind a ridiculously-misleading television ad targeting former Vice President Joe Biden that mashes up words from former President Barack Obama in the same shitty way that you made a mixtape with your boombox in 1988.

► There’s no movement on a stalled PUC appointment that Senate President Leroy Garcia is trying to prevent.

► There used to be a line that elected officials wouldn’t cross as a measure of common decency. Colorado Sen. Cory Gardner skipped right on past such a line on Wednesday.

► Schools in Jefferson County will be closed on March 19 because of anticipated teacher shortages related to an “Educator Day of Action” planned by the Colorado Education Association.

► South Bend, Indiana Mayor Pete Buttigieg has a plan for his post-Super Tuesday Presidential campaign. Buttigieg’s campaign is anticipating that the Mayor will not carry any states on Tuesday.

► Records show that more than half of students in some Colorado schools are not vaccinated.

► Not a town hall meeting.