With President Trump’s Colorado Springs visit getting so much attention on Thursday, you may have missed a bombshell story about Russia’s continuing efforts to meddle in American elections.

Intelligence officials warned House lawmakers last week that Russia was interfering in the 2020 campaign to try to get President Trump re-elected, five people familiar with the matter said, a disclosure to Congress that angered Mr. Trump, who complained that Democrats would use it against him.

The day after the Feb. 13 briefing to lawmakers, the president berated Joseph Maguire, the outgoing acting director of national intelligence, for allowing it to take place, people familiar with the exchange said. [Pols emphasis] Mr. Trump was particularly irritated that Representative Adam B. Schiff, Democrat of California and the leader of the impeachment proceedings, was at the briefing…

…Though intelligence officials have previously told lawmakers that Russia’s interference campaign was continuing, last week’s briefing included what appeared to be new information: that Russia intended to interfere with the 2020 Democratic primaries as well as the general election.

On Wednesday, the president announced that he was replacing Mr. Maguire with Richard Grenell, the ambassador to Germany and an aggressively vocal Trump supporter. And though some current and former officials speculated that the briefing might have played a role in that move, two administration officials said the timing was coincidental. [Pols emphasis] 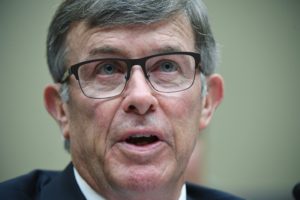 Former acting DNI Joseph Maguire, who lost his job for doing his job.

Let’s break this down into a short timeline of events:

1. Members of the House Intelligence Committee — both Democrats and Republicans — are briefed by national intelligence officials and told that not only is Russia trying to mess around with American elections again, but they are doing it in order to smooth the path for a second Trump term. Acting head of national intelligence Joseph Maguire presides over this briefing.

2. Trump is furious when he hears about the meeting and screams at Maguire in the Oval Office. As The Washington Post explains:

Trump announced Wednesday that he was replacing Maguire with a vocal loyalist, Richard Grenell, who is the U.S. ambassador to Germany. The shake-up at the top of the intelligence community is the latest move in a post-impeachment purge. Trump has instructed aides to identify and remove officials across the government who aren’t defending his interests, and he wants them replaced with loyalists.

Maguire, a career official who is respected by the intelligence rank and file, was considered a leading candidate to be nominated to the post of DNI, White House aides had said. But Trump’s opinion shifted last week when he heard from a Republican ally about the official’s remarks. [Pols emphasis]

3. Trump appoints Richard Grenell — the Ambassador to Germany who has been called “an unqualified loyalist“– to become the new acting director of national intelligence. Trump administration officials say that the hiring of Grenell and dismissal of Maguire was coincidental and not related to last week’s intelligence briefing. Nobody with even a partially-functioning brain believes this to be true, particularly given Trump’s loyalty purge since he was acquitted on impeachment charges.

President Trump is concerned that Democrats will be able to hurt his re-election chances by pointing to the fact that Russia wants him to remain in the Oval Office. He’s probably not wrong about this, but that doesn’t change the fact that Russia is actively trying to influence the 2020 Presidential election. Again.

Does Trump want Russia’s help in winning re-election? Nobody would believe him if he said otherwise, but that’s really a separate issue at this point. The important thing isn’t to figure out whether or not anyone wants Russian interference to happen — what is absolutely critical is making sure that Russian election interference is stopped. Period.

The Colorado angle for this story leads us back to Sen. Cory Gardner (R-Yuma), who was feted by Trump on Thursday in Colorado Springs for his “unwavering” loyalty and “100%” support of the President. On Wednesday, 9News reporter Marshall Zelinger managed to find “Colorado’s most elusive politician” and asked him a question about foreign interference in our elections:

ZELINGER: We’ve never heard from you if you thought asking foreign assistance is illegal or unconstitutional would you do so in your…

GARDNER: It’s never okay for a foreign government to interfere with our elections. It’s never okay for that and I’ve certainly made a lot of points about that introducing legislation to make sure that other countries don’t do that. But if you’re talking about impeachment, that was a policy issue that we had to — you can’t impeach over policy issues.

ZELINGER: But in your campaign, would you do that would you ask for…

GARDNER: Absolutely not. In fact I’ve said I would go immediately to the FBI if there was any such an issue that we thought was coming up.

ZELINGER: But would you put a label on it? Illegal or unconstitutional?

GARDNER: I guess I don’t understand what you mean.

ZELINGER: If you were asking for foreign assistance?

Gardner has had trouble with this simple question for months, but now he says that it is wrong to ask foreign governments for election assistance. That’s cute, since Gardner had no problem with President Trump quite literally asking Ukraine to interfere in the 2020 election by kneecapping Joe Biden, a potential General Election opponent. Gardner will eventually say what he thinks you want to hear, but he clearly has no intention of doing what you think ought to be done. Remember that Gardner is a member of the Senate Foreign Relations Committee, so this sort of thing is right in his supposed wheelhouse.

Russia wants Donald Trump to remain President of the United States. How Republicans respond to this reality is much more important than what words they use with reporters.

Republicans can take active efforts to thwart Russian election interference…or not. These are the only two courses of action that matter.