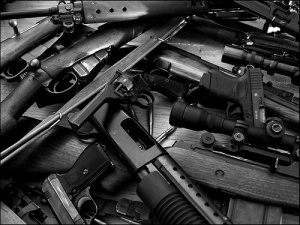 As the Denver Post’s Elise Schmelzer reports, an arrest warrant for felony perjury has been issued in a controversial extreme risk protection order (ERPO) case out of Larimer County–a “red flag” request filed by the mother of a man killed by Colorado State University police, in which Susan Holmes claimed under penalty of perjury that she “shared a child” with the officer in question:

The Larimer County Sheriff’s Office issued the warrant for Susan Holmes on suspicion of first-degree perjury and attempt to influence a public servant, spokesman Jered Kramer said. Holmes has not been arrested, Kramer said.

Online court records show the warrant was issued Jan. 23, one week after Holmes appeared in court to argue that the state confiscate Colorado State University police Cpl. Philip Morris‘ guns for a year. Morris shot and killed Holmes’ son, Jeremy Holmes, in 2017. The warrant was first reported by The Coloradoan.

Susan Holmes said on the petition that she and Morris shared a child together. In an interview with The Denver Post, she said that wasn’t true but that she had a legal theory she planned to use to justify her statement. She declined to explain the legal theory.

The case resulted in momentary drama after opponents of the new “red flag” law seized on Holmes’ pro se filing as evidence that “the red flag law would be abused to harass and intimidate lawful gun owners.” Because Holmes did not file the temporary request for an ERPO that would normally precede the main hearing, the case remained in limbo for about 48 hours until a judge could review the request and immediately throw it out.

Due to some initial “fog of war” confusion over Holmes’ irregular filing, it took about the same amount of time for the facts to catch up to the hype: there was never a temporary ERPO issued in the case, and the police officer in question was never ordered to relinquish his guns or subjected to any other penalty. As soon as the request was reviewed by a judge it was dismissed, and because the request was made based on a plainly false statement Susan Holmes is now subject to prosecution for lying under oath.

Setting aside the tragic nature of Holmes’ dispute with the CSU Police, what we have here is a clear case of the ERPO law working exactly as designed. It is already against the law to lie under oath (see: Denver AirBnB scofflaws). In addition to providing a legal process to remove guns from persons ruled by a judge to be a threat to themselves and/or others, the law also adheres to evidentiary standards and relies on due process like every other law to protect against false complaints.

Tell your friends, because there’s a decent chance in the last two weeks they’ve heard differently.