Colorado Sen. Cory Gardner (R-Yuma) has had a rough couple of months thanks to his transparent inability to even pretend that he’s anything more than a rubber stamp for Senate Majority Leader Mitch McConnell and President Trump on the topic of impeachment.

Gardner’s obsequiousness has made him a national punchline; on Tuesday David Leonhardt of The New York Times wrote a column referring to Gardner as “(R-Invisible),” calling him “a Trump loyalist who doesn’t want to admit it.” And last night, Gardner was the punchline in a skit on “The Tonight Show” about Republican Senators resorting to an “excuse generator” to explain their opposition to calling witnesses in a Senate impeachment trial. Take a look:

When Republican Senators wanted to wrap up the impeachment trial by not calling witnesses, they turned to the Republican Excuse Generator #FallonTonight pic.twitter.com/irUvmCOtmT

FALLON: Next, when they asked Ben Sasse, he said, “Sorry but…I signed up for…smile lessons.”

This is particularly brutal for Gardner because his smile is the one thing that he and his supporters have promoted above all else. He’s a nice guy! Look how much he smiles!

Before Gardner made inaccessibility his brand, the “smile” was his secret weapon. It was always disingenuous, but it wasn’t always so obviously fake in that used-car salesman kind of way. Gardner’s smile is pasted on his face in order to distract you from whatever double-cross he’s working on at the moment, and his ridiculous posturing around Trump’s dealings with Ukraine have laid that bare. Try saying “We have a trial” over and over again without cracking a smile — it’s impossible.

Even casual observers are seeing Gardner and his smile for what it really is, making him easy fodder for national columnists and late night television. When what was once your greatest political weapon becomes an open joke, your political career is in big trouble. 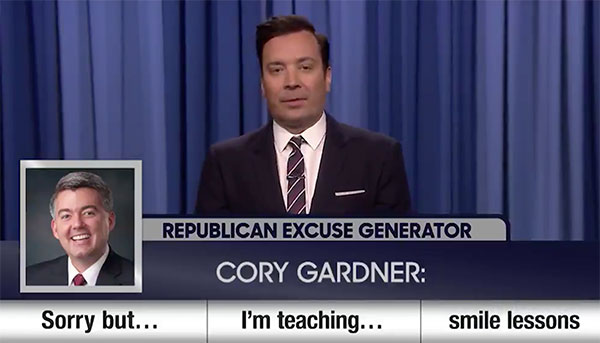