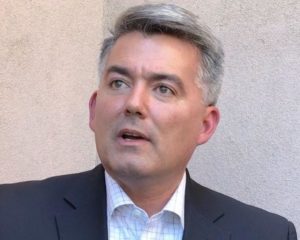 As you may have heard, Colorado Sen. Cory Gardner (R-Yuma) doesn’t want to talk about the impeachment of President Trump.

For more than six months now, Gardner has gone to ridiculous lengths to avoid reporter questions on the subject, fleeing from questions on foot, moving walkways, or via his favorite escape method: Capitol Hill elevators. On the rare occasion that he finds himself cornered by a reporter, Gardner vomits out nonsense answers like, “We have a trial” before he scurries away.

We’ve taken note on numerous occasions of Gardner’s proclivity for diving into little-used elevators instead of answering pretty standard questions from local and national journalists alike. Gardner’s most recent elevator escape led to this fantastic GIF on Monday that perfectly encapsulates the last few months for Colorado’s junior Senator.

It would appear, however, that Gardner has finally come to understand just how bad this all looks for him.

Gardner stops and answers question about witnesses, says Senate still in middle of trial. Says last time he answered question someone filmed him getting in elevator and door closing so wants to avoid that this time so people can’t make fun of him

Politico’s Burgess Everett elaborates on this Tweet in an “impeachment update” report today:

Sen. Cory Gardner, who is up for reelection this fall in Colorado, made sure to avoid any ridicule on social media on Tuesday morning.

Asked a question on witnesses, the GOP senator noted the last time he answered he was mocked for allowing the Senate elevator doors to close before he gave a complete answer.

“Last time I got in elevator, one of you guys filmed me and really made fun of. So I’m going to stand here and answer that question. And just ask that you don’t film me!” Gardner said with a laugh. [POLS EMPHASIS]

As to whether he will vote to hear from new witnesses, Gardner was noncommittal: “We’re in the middle of the trial. I’ll continue to listen to the arguments put forward.”

This sounds a lot like a guy who realizes that he has really screwed up here. Gardner wanted to get through the Trump impeachment trial without becoming part of the story, but his painfully obvious attempts at ducking the subject have had the exact opposite effect. 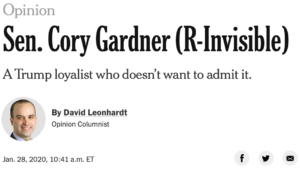 Gardner’s revelation today comes on the same day that David Leonhardt of The New York Times singled out Colorado’s Junior Senator for his invisibility:

Gardner has not expressed skepticism about the obvious lies Trump’s lawyers are telling. Gardner doesn’t seem concerned about Trump perverting foreign policy for his own personal interests. And Gardner has shown no interest in hearing all the relevant evidence by calling witnesses to testify…

…Gardner is making a bet. Even though many of his constituents — most, perhaps — believe that Trump has violated his oath of office, Gardner has evidently decided that he can safely ignore them.

In November, Colorado’s voters will get a chance to prove him wrong.

We’ve said for a long time that inaccessibility is the Gardner brand. The Yuma Republican appears to now understand that he made a huge marketing mistake.