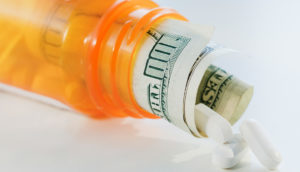 While you were reading about impeachment news last week, you may have missed a significant vote in the Democratic-controlled House of Representatives addressing an issue that is of utmost concern to American voters in 2020: Reducing the outrageous costs of prescription drugs.

The “Elijah E. Cummings Lower Drug Costs Now Act” (HR-3) passed out of the House on Thursday on a largely party line vote (Colorado’s four Democratic House Members voted “YES,” while all three Republicans voted “NO”) and will now head to the place where all good pieces of legislation go to die: The desk of Senate Majority Leader Mitch McConnell. As CBS News explains:

Speaker Nancy Pelosi’s bill would cap Medicare recipients’ out-of-pocket costs for medicines at $2,000 a year. It would use about $360 billion of its projected 10-year savings from lower drug costs to establish Medicare coverage for dental care, hearing, and vision, filling major gaps for seniors.

But the legislation has no chance of passing the Republican-controlled Senate, and the White House has issued a veto threat. Still, Democrats saw a victory in the message their bill sends to voters…[Pols emphasis]

…Pelosi is claiming bragging rights because her bill would deliver on the promise that President Trump made as a candidate in 2016, when he said he would “negotiate like crazy” to lower prescription drug prices for Medicare recipients. It’s a pledge that Mr. Trump has backed away from as president.

Polling data continually shows that health care and prescription drugs top the list of voter concerns in 2020…much like they did in the Democratic wave year of 2018. A recent survey from Healthier Colorado found that 82% of Colorado voters believe that prescription drugs are too costly; nearly half of voters say that health care in general is unaffordable. The bill passed last week in the House of Representatives has the support of groups such as AARP, but McConnell won’t touch it in part because it is fiercely opposed by the pharmaceutical industry. As Politico reports today, the issue has put Republicans in a bind:

Yet with an election year cresting and massive divisions among his members, Senate Majority Leader Mitch McConnell is staying put. Associates say the Kentucky Republican is not eager to make a move that splits his caucus and could incur the wrath of the well-financed pharmaceutical industry.

A final decision will wait until after the Senate’s impeachment trial. Many Senate Republicans, however, know they need to do something to satisfy Trump and avoid the awful optics of doing nothing at all.

Senate Finance Chairman Chuck Grassley (R-Iowa) this summer advanced a bill that would fine drugmakers that hike prices above inflation rates, but from the start it had more Democratic support than Republican backing. Even though a significant number of GOP members say it’s a bold stroke with crucial presidential support, many Republicans liken the move to price controls that would kill innovation.

This quote from Louisiana Republican Sen. Bill Cassidy sums up the absurdity of the GOP’s position: “Thank goodness Republicans control the Senate. That said, we still need something to make medicines affordable.” Ya think?

Republicans have lambasted impeachment investigations against President Trump as a distraction from the key issues facing average Americans, but Democrats snatched that stool right out from under them last week by multitasking on important topics. As The Hill explains:

Vulnerable Democrats in swing districts can point to the legislation as keeping a long-held promise to let Medicare negotiate drug prices. Members can show they are focused on kitchen table issues despite the chaos over impeachment.

The bill also gives moderate Democrats in Congress a chance to tout a health care issue that’s separate from the “Medicare for All” debate consuming the Democratic presidential primary.

“If a Democrat wins the White House and the party takes control of the Senate, a bill to allow the government to negotiate drug prices seems much more likely to pass than Medicare for All or even a public option,” said Larry Levitt, executive vice president for health care policy at the Kaiser Family Foundation.

Congressional Republicans are now in the unenviable position of arguing against the substance of legislation that would reduce health care costs for millions of Americans. Republican leaders can shake their fists at the idea of “price controls” for prescription drugs, but that language only makes a dent with pharmaceutical lobbyists; controlling prices is exactly what average voters want to see from Congress on the issue of prescription drug costs.