A majority of Coloradans are concerned about the rising costs of healthcare and prescription drugs, and prefer a public option to enroll in Medicare or Medicare for All over the current system, according to a statewide survey by Healthier Colorado, a nonpartisan, nonprofit organization dedicated to improving the health of all residents throughout our state’s diverse communities.

The poll was conducted November 6-9, 2019, among a sample of 650 active voters, with an oversample in West Slope counties. Roughly half of voters surveyed (45%) said the cost of healthcare is unaffordable, while an overwhelming majority (82%) believe the cost of prescription drugs and medication is too high. When presented with the option to keep the current system in which health insurance is purchased through one’s employer or privately, or move to a public option or Medicare for All, only one-third of voters prefer to keep the current system. The other two-thirds were evenly split between wanting a public option and Medicare for All.

Useful information for the upcoming debate in the Colorado legislature beginning next month on a proposed public option coverage plan. But at the bottom of the release announcing this poll, right before the link to the full results at Keating, our readers will find the question we’re most interested in today, with all due respect to Healthier Colorado: 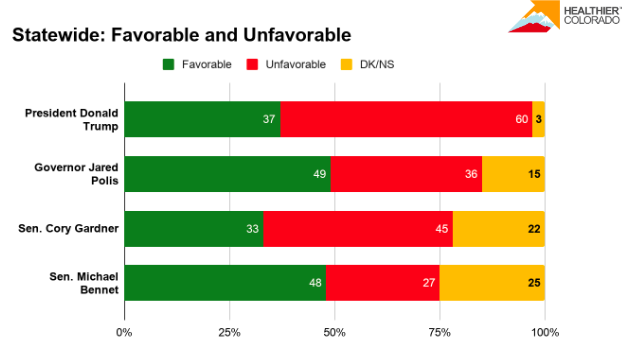 Overall, a majority of Coloradans (52%) believe Colorado is headed in the right direction. When asked about elected officials running for election in 2020, only 37% have a favorable view of President Donald Trump, while 60% view him unfavorably. Senator Cory Gardner, currently running for his second term fares less favorably, with 33% favorable, 45% unfavorable. [Pols emphasis]

If this poll is accurate, Sen. Cory Gardner is not just America’s Most Vulnerable Senator™. Gardner is in a downward spiral that there may well be no coming back from. This is the second poll this fall showing Gardner’s approval rating below 35%, several percentage points short of President Donald Trump’s own dismal 37% approval in Colorado and 12 points south of Gardner’s 45% unfavorable rating, clearly reflecting Gardner’s weakness among base Republicans–in addition to the state’s compounding wholesale rejection of Republican candidates that accelerated in last year’s historic Colorado Democratic landslide.

It’s hard to imagine Gardner losing the general election next November by the margin a 33% approval rating suggests, not least because many of those disaffected Republican voters are sure to hold their noses and vote–but to call these numbers bad news for Gardner’s re-election prospects is a considerable understatement.

While we can’t pronounce Cory Gardner a political dead man walking on the strength of one poll, these numbers are undeniably what that looks like.