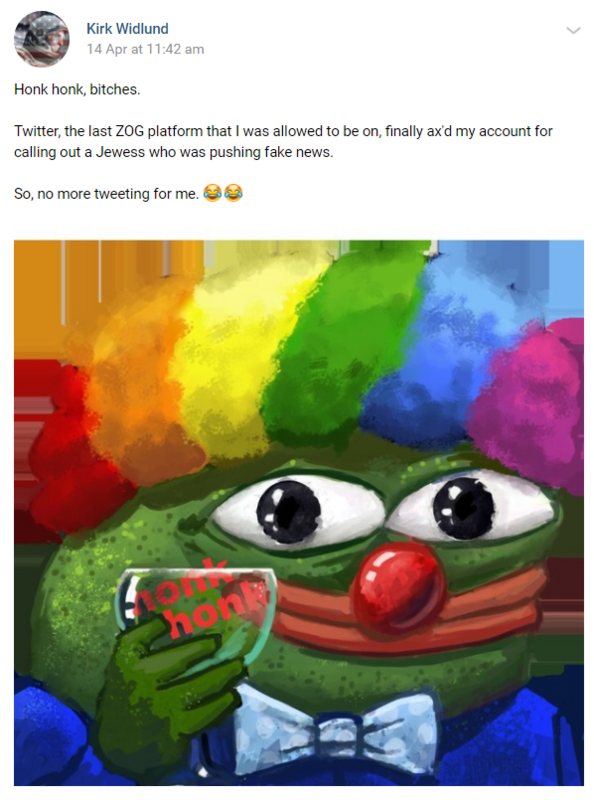 We’ve been following for a week now the story of a producer at local conservative talk radio station 710 KNUS accused by the Colorado Springs Anti Fascists, better known as “Antifa,” of living a not-so-secret double life on a Russian social media site in which said producer lets his inner Nazi out to play–and we’re not talking Nazi curious here, but full-blown Hitler-idolizing Jewish-hating unapologetic Nazism that would delight the unapologetic Nazi recently uncovered living in Denver public housing.

Colorado Springs Antifa has to overcome a credibility barrier with some audiences, but this particular group has a history of accurately identifying local white supremacists, including an Air Force master sergeant at Schreiver AFB who was demoted after the Antifa kids caught him organizing with the Identity Evropa white nationalist group. The post identifying Kirk Widlund of 710 KNUS as the owner of the Kirk Widlund profile on the Russian VK social network cites dialogue between the owner of that profile and another known local racist among other details that, despite Widlund’s fierce denials, make a strong case that it’s the same Kirk Widlund.

KNUS management declined to comment on the allegations. Widlund denied any connection to the account but would not discuss why his language on 710KNUS mirrored the social media account in April…

When asked again to answer to the VK posting [closely] matching what he said on the radio, Widlund ended the conversation with, “Uh..no comment to that.”

Matching a post on Widlund’s alleged VK profile to the conversation Widlund had on the air discussing his ban from Twitter is a crucial piece of evidence that, along with the voluminous original post from Colorado Springs Antifa makes it very difficult to believe this profile is a fake. It seemed impossible from the outset that this Colorado Springs-based group would care enough about an obscure radio producer in Denver to fabricate such a lengthy social media archive. Now that Nazi Kirk Widlund and KNUS Kirk Widlund have been linked via a single event, Widlund’s ban from Twitter from April 14 with discussion in both settings, we’d say the game is up.

Now it’s just left to be seen whether KNUS, from Widlund to the “Proud Boys” allegedly set to host a show on the station, considers their “Nazi problem” to be a problem…or a new strategic direction? Needless to say, we hope for the former.