How Today’s Nazis Beat The High Cost of Living 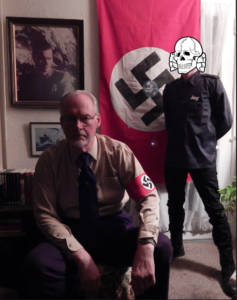 We wrote earlier in the holiday weekend about the story of an “Antifa brawl” in Pueblo, an incident comically failed to withstand the scrutiny it never got in the retelling by conservative media. But on the other hand, if you’re looking for real-life According to Hoyle Nazis, right here in Denver and without any embellishment necessary, NBC News via 9NEWS’ Jeremy Jojola has got you covered:

A fan of Charles Manson and follower of Hitler, James Mason published essays in the 1980s that now act as the inspiration for a militant neo-Nazi group linked to multiple murders in the U.S.

But nowadays, Mason isn’t waging war with the system. He is, in fact, dependent on it.

The 67-year-old white supremacist lives in a government subsidized apartment in Denver and eats at soup kitchens. [Pols emphasis]

Through Jojola’s local report a week ago on neo-Nazi “thought leader” James Mason, we learned for the first time about a new-ish Nazi group known as the Atomwaffen, which the Southern Poverty Law Center (SPLC) tells us are most definitely what President Donald Trump would call “very fine people.”

AWD is organized as a series of terror cells that work toward civilizational collapse. Members, who can be fairly described as accelerationists, believe that violence, depravity and degeneracy are the only sure way to establish order in their dystopian and apocalyptic vision of the world. AWD’s chief influences are James Mason, Charles Manson, Joseph Tommasi and William Pierce. Their strategy for promoting and establishing national socialism can be traced back to The Order, the violent and capable white supremacist terror cell founded by Robert Jay Mathews in the 1980s.

You might be asking yourself, “why would a Nazi accept public assistance?” That seems a bit off message for one of America’s leading Nazis.  The answer is, we strongly expect, that being one of America’s leading Nazis has a profoundly negative effect on one’s employability. The public benefits available to qualifying needy Americans do not make ideological exceptions, and as distasteful as it may be for taxpayers to know they are paying a leading Nazi’s room and board, that’s probably not a policy anyone should want changed. With that said, in Mason’s individual case, suggesting that if his fellow neo-Nazis are going to kill people they should “do it right” might be enough to warrant a second look at his taxpayer-funded living on public safety grounds.

It is telling, one way or another, that while conservative media outlets like The Blaze ran hard with an as-it-turns-out fictional story about an “Antifa brawl” in Pueblo, there’s not a peep that we’ve found in any conservative media about Denver’s very real “Nazi welfare queen.” In fact, since these two stories aired on local and then national NBC News, Jojola has been bombarded on social media from the right–not with congrats for exposing a Nazi on the dole, but demanding to know why Antifa doesn’t get “the same” coverage.

For those of us following the local news headlines, this “whataboutism” is even more laughable.