(Who would admit to this? – Promoted by Colorado Pols) 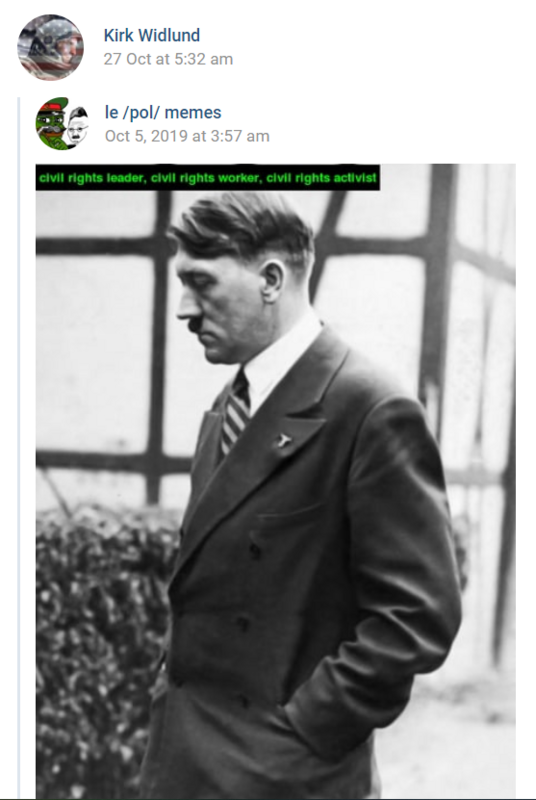 In what are apparently his first public comments since accusations surfaced that he’s a Nazi, KNUS 710-AM producer Kirk Widlund said it’s all a “smear” campaign against him, and he never stated, among other things, that America fought on the wrong side of WWII.

“It’s absolutely a smear,” Widlund told me Monday. “One hundred percent. I don’t know if they’re trying to destroy me, or the station, or the people I work with. But it’s a total smear.”

The accusations against Widlund were first published by a group called Colorado Springs Anti-Fascists, which describes itself as a “collective of private citizens” fighting fascism and other forms of discrimination and hate.

One post, for example, says that the United States fought on the “wrong side” of WWII.

“The sad fact of the matter is that there has been no book written; no words put to print; no joke constructed or performed on stage; no music group formed; no instrumentation conducted; no ‘epic space opera’ put to film; no technological feat; no wonder drug discovered; nothing at all that justifies or soothes the truth; we fought on the Jewish side of WW2 (Communism/Marxism and Zionism), and thus every societal ill conjured up in the last century has been a direct result of fighting on that wrong side,” states the post by “Kirk Widlund.”

The VK profile of “Kirk Widlund” was taken down after Colorado Springs Anti-Fascists published its post, but the group had copied the account’s content and has made it available.

“I am not a Nazi.,” said Widlund. “Those quotes they are saying are mine are not mine.”

Asked if he thought the posts were fabricated by the Colorado Springs Anti-Fascists, Widlund said he did not know where they came from.

The Colorado Springs Anti-Fascists rejected claims that the group “manufactured two years worth of social media posts in order to frame” Widlund.

“When we published our research on Mr. Widlund, we included a full and uncensored archive of every post he has made since he created the account in 2017 that anyone is free to download and verify,” wrote Colorado Springs Anti-Fascists in a statement. “Putting aside the absurd suggestion that we manufactured two years worth of social media posts for a largely behind the scenes personality at 710 KNUS, it would be impossible for us to manufacture the comment Kirk left on Lucas Martin’s photo describing Adolf Hitler as an ‘Amazing Hero,’ that is still online as of 12/10/19. We also could not have manufactured Lucas Martin’s LinkedIn profile which features endorsements by Kirk Widlund, nor could we manufacture the fact that they both attended Colorado Media School at the same time. If Mr. Widlund and Mr. Tubbs are going to claim that we manufactured two years of social media posts, they need to provide some proof.”

Widlund is named as a connection in Lucas Martin’s Linkedin profile, and Martin apparently retweeted Widlund’s VK post about being on the wrong side of WWII. The pair apparently worked together and attended the same film school.

“I have a tangential relationship with one person that they say I am associated with, but whatever activism he engages in is separate and apart from from me,” said Widlund in response to the allegations about his connection to Martin. “I do not engage in that kind of activism.”

Widlund’s apparent Twitter profile, which has been suspended by Twitter, was called “Smirkin’ Kirk Widlund” and stated, “It’s Okay to be a Smirkin’ Nationalist.”

Tubbs announced on air that Widlund was on the job Monday, after Tubbs tweeted earlier in the day that KNUS was conducting an “internal investigation” that “so far has found no truth” to the allegations.

KNUS was in the national media spotlight last month after the station manager canceled host Craig Silverman’s show, which was produced by Widlund, during a commercial break mid-show, after Silverman criticized Trump and discussed appearing on other shows to talk about Trump.

Craig Silverman argues he wouldn’t have been dropped from KNUS if he wasn’t critiquing the president, and he points out his independent contractor agreement with KNUS allows him to work on other stations. But KNUS staff say that they debate Trump frequently, and the station was not trying to silence Silverman on Trump.

CORRECTION: The author of this post misinterpreted a tweet yesterday from Steffan Tubbs to mean that Tubbs had evidence (“pictures and posts”) showing that the social-media posts under “Kirk Widlund’s” name had been fabricated. In fact, Tubbs’ tweet was not relevant to this post and the reference to it was removed from this post.